The view from above: Drone technology brings a new perspective to job sites 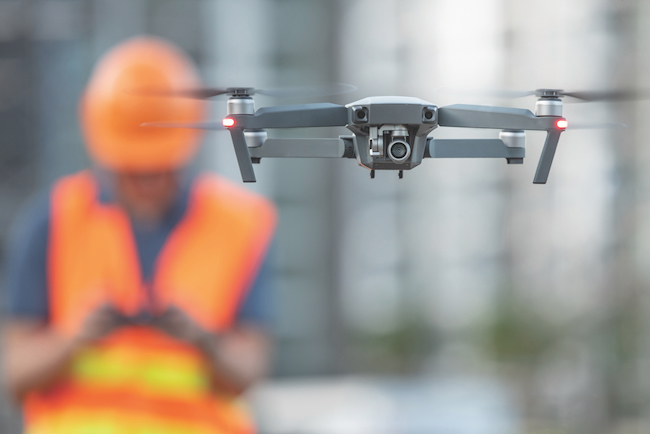 Drivers may be frustrated with traffic disruptions related to two ongoing highway interchange projects in Saskatoon, but at least they’re not in the dark.

Thanks to a series of narrated drone-created videos on the city’s website, they can view an excellent, high-level picture of what’s been accomplished on the projects and what lies ahead over the next few months. Watching the progress, authorities are finding, eases the anxiety.

“At times it’s difficult for people to see why they’re being obstructed by construction so much, so it’s easier if they have an overall perspective,” says Brad North, construction modeling specialist for PCL Construction in Saskatoon, which created the video as part of its work as general contractor on the project.

Public information websites are nothing new, but the quality of the Saskatoon presentation, compared with traditional images and diagrams, clearly raises the bar. It also shows just how far the technology has come.

Public visibility is one of many emerging use case categories for drones in the construction industry. These generally fall into two categories – the sharing of visual information, as in the above example, or the use of drones for measurement purposes.

AN EYE IN THE SKY

Perhaps the most common application is the use of drones to conduct inspection work that would otherwise put workers in harm’s way. Drones can capture videos of the undersides of bridges, thermal photos of building facades, or high-resolution imagery from precarious locations such as the top of a wind turbine. “You reduce worker exposure and eliminate the risk of injury when doing these inspections when you utilize a drone,” North says.

The unique visual oversight of job sites that drones can provide is, understandably, extremely valuable for planning meetings, review sessions, or the sharing of best practices.

“We were pouring a seven-lane bridge deck in Saskatoon and used the drone to monitor the start of this large pour,” North says. “We were observing pump locations, concrete truck access, and location of testers, and you get a better perspective from the air in real time. With this information we were able to make informed decisions that improved workflow. We also sent this footage to other PCL offices that had similar projects to aid in their planning.”

Visual images can also be used to enhance site plans. On a recent project, North mapped a job site with 1,600 high-resolution photos, and superimposed computer-aided design (CAD) drawings. The result is an up-to-date site plan where you can actually zoom in on a bootprint in the ground.

On the measurement side, drone surveys are gaining wide use for planning and progress monitoring. EllisDon, for example, is using drones to monitor progress on the earthworks excavation on the Toronto Port Lands project, which involves re-routing portions of the Don River.

“We’re using drones to keep track of progress based on the quantities that are being moved on the site,” says Sophie Croteau, virtual design construction coordinator at EllisDon. “The idea is that we can measure and compare those numbers to the daily rate or the monthly rate that we’re expecting. If the numbers don’t match up, we can find out why, and we learn that earlier than we would otherwise.”

Two basic correction technologies are used to improve the accuracy of drone surveys so that they can be used for such purposes. Real-Time Kinematics (RTK) reference a number of established ground points to ensure accuracy, and employs a continuous communication link between a rover such as a drone and a satellite receiver acting as a base station in order to provide corrections to GPS readings in real-time. Post-Processed Kinematics (PPK) require fewer reference points on the ground, and make corrections after all of the data has been captured and uploaded. Each method has pros and cons, and as Croteau notes, it’s important to have good technical advice on which way to proceed. 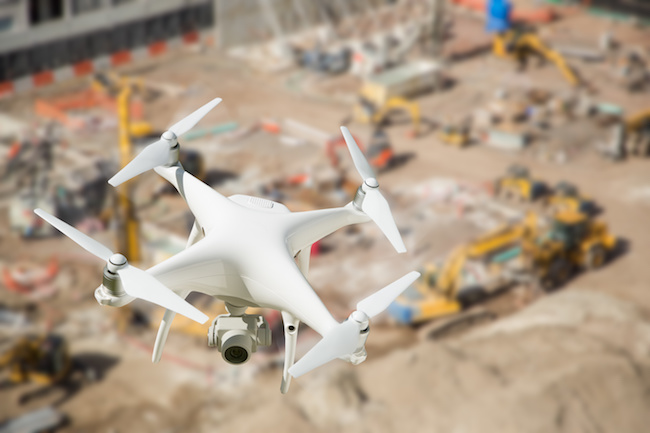 Although a drone can cover an area in 30 minutes that would take a week for a survey team to complete, accuracy varies depending on the method and equipment being used. While ground surveys can achieve accuracy of within a few millimetres, some commonly used drone-based methods get between three and five centimetres.

It’s important, therefore, to match the collection method with the application. “We were planning an access road to a remote site, so we used similar drone mapping techniques to generate contours of the layout of the land and used the contours to plan our access roads,” North says. “This was high level – not as accurate as we would need for actual building, but sufficient for cut and fill volumes and estimating costs.”

The development of drone-related technology has exploded in the past few years. In 2015, investments in drone start-ups increased fourfold over the previous year, and today, the selection of drones and accessories is increasing rapidly. Drones suitable for use in construction applications range from consumer-based models priced around $1,500 to high-end models in the range of $20,000, which might be equipped with a thermal camera or a battery warmer for use in cold weather.

The evolution of software that converts collected data from drone cameras and other sensors into usable information has been equally robust. With sensors collecting, in some cases, 800 data points per second, the number-crunching capabilities are significant.

“There’s lots of buzz about drones, and that has captured the imagination of the industry,” says Andrew Evans, a product manager with Topcon Positioning Group. “But getting the data into the hands of the people that need it quickly has always proved challenging. So we’re seeing the processing and data prep tools that are making that possible.”

The software phenomenon is part of the Internet of Things (IoT) trend, where input from sensors on drones, machine control systems and a wide range of other surveying systems is ported into a unified environment in the cloud and made available through a user interface. Topcon’s MAGNET Collage is a widely-known software platform in this space.

Software has also made possible the autonomous flight option, where drones follow pre-programmed flight patterns. Menlo Park, Calif.-based Kespry provides self-flying drones on a subscription basis. “You don’t have to know how to fly a drone,” says Jason Nichols, senior product marketing manager at Kespry, “you just push the button and fly it.”

Kespry’s unlimited flight subscription model encourages contractors to experiment with different use cases. For example, a contractor could use a drone survey to submit a more accurate bid on a site where a lot of excavation is involved, or to provide evidence that a job was completed properly.

The autonomous flight function, however, doesn’t necessarily eliminate the need for trained pilots. “We do use autonomous flight features on these drones,” says North, “but we also ensure that our pilots are trained and can fly without the aid of GPS so that if something happens with the flight plan, we can bring the drone back manually. Our pilots have to understand flight controls and be able to react under pressure.”

Pilots are required by law to be certified by Transport Canada, and this June, new stricter regulations will come into effect. These will include tougher qualifications for pilots, restrictions about where and when drones can be flown, special requirements for operation near airports, and certification of the drones themselves. The advanced exam, which will apply to contractors, involves both a theoretical and a practical component. The new regulations are available on the Transport Canada website.

There are, however, other regulatory requirements. “You have to know your area, and if a bylaw exists for drone use,” North notes. “For example, in some cases, you might need a filming license and approval from local authorities, in addition to NAV Canada. So this can be challenging.”

Another issue is privacy. There are concerns that workers, or subcontractors, are being spied on by drones, so there need to be measures in place to counter that. “We post signage to let people know when there’s a drone up there capturing data,” North says, “and we make sure every supervisor on the job site is aware – it’s in their tailgate meetings.”

According to Croteau, contractors also need to be aware of the standards of traditional surveying, and to understand the implications of using drone data in place of information collected in traditional ways. “You need to involve people who know about how drone surveying works,” Croteau says, “and also understand how the new Transport Canada regulations will affect drone operations.”

The construction industry has often been resistant to new technology, but there is a “cool factor” that is allowing drones to gain momentum toward wider acceptance. “People may not realize the extent of how drones can be used, but this is a trendy topic that everybody knows about,” Croteau says. “That makes it easier to actually apply.”

Croteau is less certain that drone-based technology is transforming the construction industry. “I’m not sure it’s changing the industry,” she says. “It’s just adding a different tool for gathering more data.”