The road north: Building through the most inhospitable terrain and harshest conditions Canada has to offer 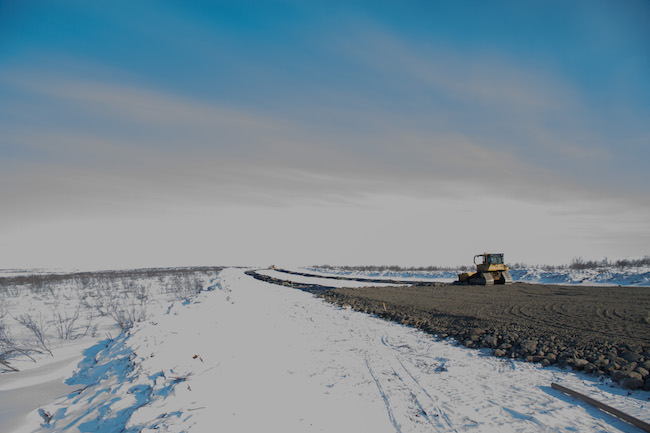 Frequent blizzards and blistering cold. Unreliable access to basic materials. Cellphone service lost in seemingly endless tundra. Conditions like these might seem like a nightmare to roadbuilders in Canada’s more temperate climes, where the occasional blast of Arctic air can bring out balaclavas and briefly put projects on ice. For crews building the first all-season highway to the Arctic Ocean though, these were all in a day’s work — and night’s work when darkness prevailed.

The year-round gravel road from Inuvik to Tuktoyaktuk, Northwest Territories linked Canada’s three coastlines 150 years after Confederation, a well-earned reward for crews that toiled through some of the planet’s harshest conditions. Now in its second year of operation, the 138-kilometre two-lane route serves as a marker for the many challenges road projects face in Canada’s expansive north.

“This was a nation-building exercise,” Kevin McLeod, an assistant deputy minister with the N.W.T.’s Department of Infrastructure, tells On-Site. “It connected Canada to the Arctic coast with an all-weather road system for sovereignty purposes. It connected Tuktoyaktuk and other communities to the rest of Canada, improving morale, the quality of life, and the cost of living for people in the North. In its first year of operation we saw close to 16,000 visitors, so it’s obviously opened the North to tourists and travellers who want to experience the depth and breadth of Canada.”

“We have a different set of challenges from our southern counterparts,” McLeod says. “While we follow the same principles of road construction in terms of base, sub-base and running surface, we have a complex environment in terms of regulatory regime and adapting to climate change. We used the same engineering and construction principles but layered these over-top our challenges, so we needed experts on permafrost, thermal analysis, and hydrology.”

Proponents took a design-construction approach, with detailed pre-planning to preserve and work with the permafrost — the delicate layer of soil, rock and sediment that lies underneath the surface and remains frozen year-round. A gradually warming climate has begun thawing permafrost in some places and human activities risk furthering the damage.

“We did lots of lots of experimentation before we put the heavy iron to the work,” McLeod says. “Preliminary engineering and design steps incorporated ground temperature monitoring for baseline conditions, we used ground-penetrating radar at select locations to confirm the presence of massive ice, and we used ground thermal analysis to predict freeze and thaw in the embankment structure.” Project engineers went so far as to replicate and test soil conditions in a special sub-freezing laboratory at the University of Calgary.

On-site, crews installed thermistors to monitor permafrost temperatures and limited heavy construction to wintertime. During the warmer seasons, when the permafrost is particularly delicate, crews remained right on the roadbed, avoiding adjacent areas and finishing work done the previous winter. 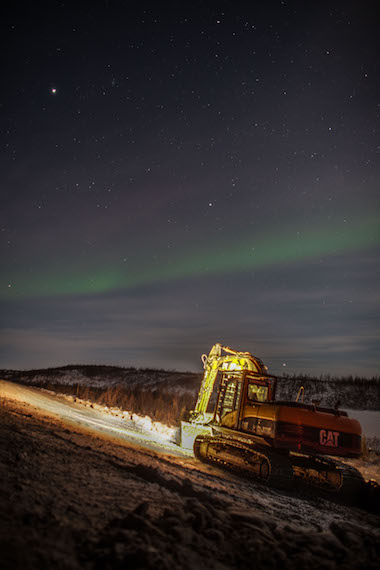 Much of the work on the new highway needed to be done in the winter to minimize environmental disruption. PHOTO: Government of Northwest Territories

The project team had to be judicious with nearby sources of granite-based gravel, generally opting for scarce rock outcrops that could be mined with relatively minimal disturbance. Environmental protection requirements limited extraction to wintertime and specified actions to prevent leaching. Eight concrete girder bridges, prefabricated in British Columbia, were built on adfreeze piles driven and literally frozen into the ground — another reason to preserve the permafrost.

“The contractor performed extremely well in terms of procedures and training folks not to take dozers or other vehicles off the road itself,” McLeod says. With some land owned by the Inuvialuit Land Administration, an agreement reached early on engaged them in planning and implementing land protections.

Safety and comfort also proved challenging. Extended darkness and temperatures exceeding -40, where Celsius and Fahrenheit meet, added layers of clothing and complexity. “We spent a lot of time and effort doing safety briefings and making sure everyone had gone through formal training,” McLeod says. “All our machines were rated for Arctic operations and had to be inspected more often [than usual] because we didn’t want any breakdowns.” Warming huts, night-time lighting and high-visibility clothing helped make the job bearable.

With area residents now enjoying improved access to goods and services, as well as the ability to consistently visit neighbouring communities, the Inuvik Tuktoyaktuk Highway carries a “Last Spike” resonance into the heart of Canada’s north.

But even while the new route’s ribbon was being cut, N.W.T. planners were poring over plans for the Mackenzie Valley Highway. As the name suggests, the road would follow the Mackenzie River as it flows north.

The southern section of this new route is expected to overlay an existing winter road, but nothing exists besides hundreds of kilometres of snaking river valley on the northernmost section between Fort Good Hope and the Inuvik region. While the permafrost is less extensive, and a nearby mountain range is like an aggregate candy shop, there are major challenges. The proximity of mountains, for instance, mandates plans to manage runoff from sudden rainstorms and melting snowpacks. “We need to make sure our bridges and culverts are designed to take the huge amount of water pouring off the watershed,” McLeod says. 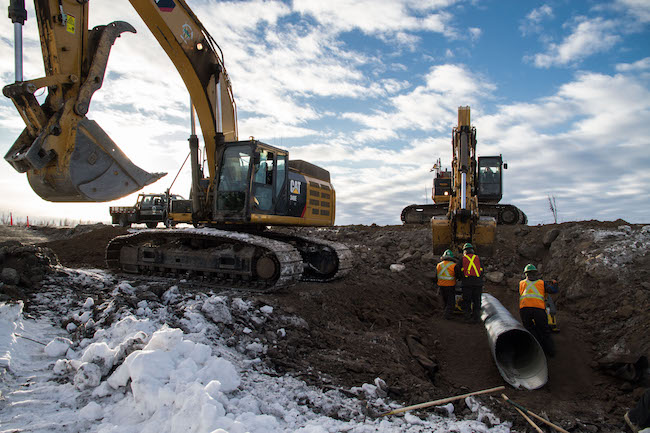 With environmental assessments underway, planners haven’t considered potential contractors for what could be seven years of work. Projected costs of $2 million to $2.4 million per kilometre, depending on the level of difficulty, remain speculative. “We don’t want to jump out too far out the gate with numbers,” McLeod says. “We have a lot more work to do in terms of how thick the road has to be, our analysis of the permafrost, how big the bridges will be — factors like these.” A 16-kilometre stretch of all-weather road built between Norman Wells and Canyon Creek as a pilot project opened last November and has fared well thus far. “We’re going to be developing lessons learned from there and then look to do the rest,” McLeod says.

BELOW THE ARCTIC CIRCLE

The northern edge of Canada’s larger provinces lay well below 66 degrees north and lack the continuous permafrost found in the three territories. Still, these regions contain sporadic permafrost and offer some of the same climactic conditions that impact roadbuilding further north. While many of the roads in northwestern Ontario are ice roads, intended for wintertime-only access to work sites and isolated fly-in communities, Villeneuve Construction has built several all-season roads, adopting techniques suited to the region’s climate and terrain.

The Hearst, Ont.-based contractor has been helping with Thunder Road, which runs deep into the heart of northern Ontario’s muskeg, a vast expanse of moss-covered bog. Literally a dead-end, Thunder Road’s sole purpose is to enable forestry. Currently 80 kilometres long, the gravel road remains an ongoing project as logging edges northwards.

Access to aggregate is a major challenge, and crews rely mainly on rock outcrops within a 40 kilometres radius, as it’s impractical and cost-prohibitive to haul from afar. Supplies are limited, so crews can’t always produce the desired grades of gravel. Sometimes they even resort to sand. “Sand requires more maintenance, but if that’s all you have that’s all you have,” says Mario Villeneuve, the company’s vice-president.

An even greater challenge is building on top of the saturated muskeg. The project team works with what’s at hand, laying down balsam, spruce and tamarack trees to form a supporting mat for what’s known as a corduroy bush road. After capping the trees with thick local clay and letting it dry, crews add layers of gravel. To cope with swampy conditions, construction is largely reserved to the winter and the dry summer months.

Just as the terrain varies across Canada, so do roadbuilding methodologies. Instead of building corduroy roads with trees, northern Alberta proponents sometimes use synthetic geotextiles for permeable, structural support, and add clay on top. “You build up the clay to a certain depth, then wait for a week, let that settle out, and continue building up,” says Dana Archibald, formerly a senior project manager with Dechant Construction in northern Alberta. Liquid or powdered lime is often applied to help reduce moisture in the clay, though the air can also dry it out. “Sometimes they’ll use it during the transition season from summer to winter, or if we’ve had a summer where there’s been a lot of moisture,” Archibald explains.

Geography also presents a challenge. Gaps in cell coverage, for instance, are minimized using boosters. “There was a time where there was no cell service, but it’s amazing how we’ve become very dependent on communication as an industry,” Archibald says. Some sites maintain a full-time mechanic, but as cell service improves teams rely on dispatchers. 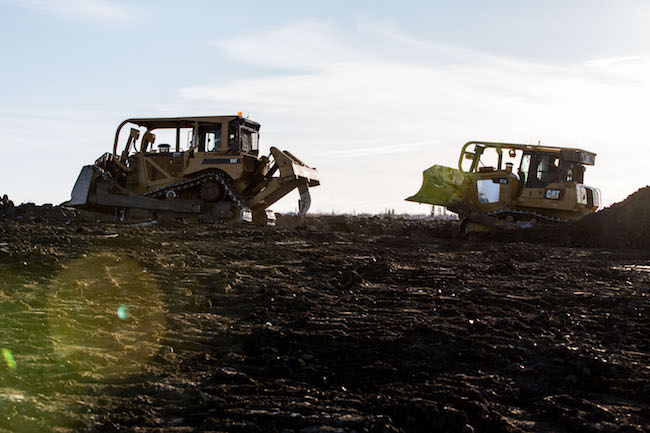 Access to aggregate also ranks quite high on Archibald’s list, as does the availability of skilled workers. “It’s a seasonal industry,” he says. “There’s only so many folks out there who have the experience and are willing to take on project-oriented jobs that might last only a few months or maybe a year if they’re lucky.”

Projects can be far from where workers live, so proponents sometimes establish temporary camps with housing and other basic amenities. “We had one job this year by Meander River where we had one-hour round trips back and forth from High Level,” Archibald says.

Eastwards, paving of the Trans-Labrador Highway has presented comparable challenges. Rodney Drover, a spokesperson with the Newfoundland and Labrador Department of Transportation and Works, says camps for workers and storage facilities for construction materials have been vital. But, for northern inhabitants and industry sectors as varied as mining, oil and gas, retail and tourism, the efforts have been worthwhile. “We are maintaining our pledge to foster growth and long-term prosperity,” Drover explains.

With road projects ongoing across Canada’s North, all of them point, at least symbolically, to the northernmost of them all. EGT Northwind served as the main contractor for the Inuvik Tuktoyaktuk Highway, and CEO Russell Newmark reflects on the moment the Arctic Ocean became accessible by car and truck. “It was an incredibly demanding undertaking,” Newmark he says.
“With the amount of oversight, regulation, monitoring and auditing, it seemed like it was 24 hours a day, seven days a week for four years to keep the project moving. And rightly so, seeing that this was the first time a highway was built in the region. There was a mixture of relief that it was over, but there was also a lot of satisfaction in doing something that really was historic and over the years will be proven to have really changed Canada in the North.”