The next pave: Next generation of concrete pavers focus on keeping it simple for operators 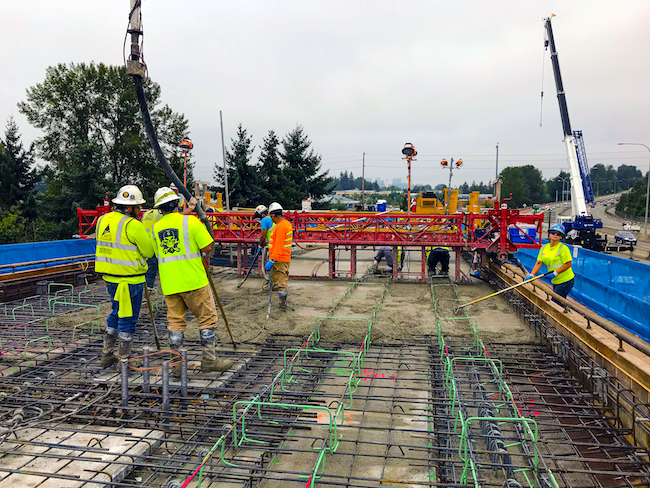 As in all Conexpo-Con/Agg years, it was all hands on deck for concrete paver manufacturers in 2020. The industry continues to roll out innovative features to take on a wider range of tasks, integrate more game-changing technology and simplify operations for concrete paving crews.

Originally designed to take on an exceedingly specific task – pave the areas between the rebar in the concrete plinths for light rail projects – Allen Engineering has reconfigured its new VLP 2424 to tackle a range paving applications.

The innovative VLP, or Versatile Light Paver, uses overhead main frame sections to support and provide rigidity to the paver frame. Paving profile frames attached to the main frame strike-off and pave concrete to the desired grade. Being self-propelled, the paver lets the operator adjust its speed to match concrete delivery, while still providing a smooth finish.

“Because of the efficient way the paver ‘screeds’ the surface, the paving crew’s labor for finishing time is greatly reduced,” the company says.

Among other perks, the VLP 2424 works on tight job sites that would have required finishing by hand in the past, letting contractors free up crews to take on other jobs. Allen says the paver is also able to account for multiple obstructions on a paving surface, considerably speeding up complicated jobs.

The new paver can be used on a number of projects, such as overhead bridge decks, light or heavy rail decks, roads and slabs on grade.

Building off a decades-long track record in high-production concrete placing, Gomaco premiered its GP360 in Las Vegas this March. The new, two-tracked machine is both a slipform paver and a placer/spreader. 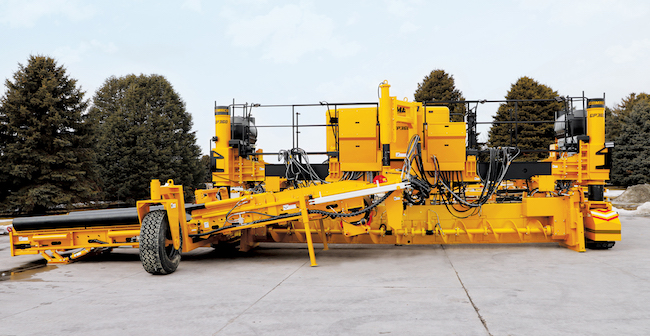 As a slipform paver, the new GP360 is capable of slipforming up to 30 feet (10.97 metres) wide. With a 60-inch (1524-millimetre) belt added, it can place concrete up to 36 feet (19.97 metres) wide.
Gomaco’s G+ digital control system, which is able to carry out the controls conversion for switching between applications, forms the foundation of the new machine. The technology also runs machine-to-machine communication, sonic sensors and 3D machine guidance, to name a few.

With the conveyor belt driven by a Caterpillar C7.1 Tier 4 diesel engine with 302 horsepower, the GP360 has a discharge speed of up to 492.5 feet per minute. The conveyor belt can be mounted on either the left or right side of the machine, depending on job site needs, the company notes. A dual-drive auger system moves the concrete to the center or outer areas and across the strike-off once the material is placed on grade.

Built around a unique tractor frame that lends itself particularly well to paving city streets, secondary roads, highways or even airports, Guntert & Zimmerman showcased its newly redesigned S600 concrete slipform paver at Conexpo 2020. The manufacturer, which has been making concrete slipform pavers since the 1940s, originally released the model in 2010, but has upgraded numerous aspects of the paver, including its engine. 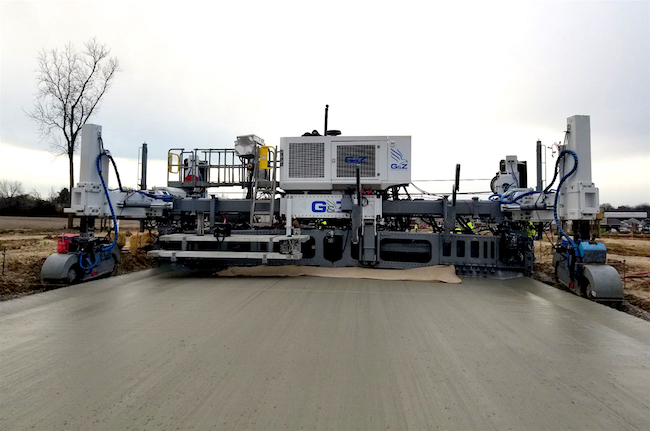 The redesigned S600 is powered by a CAT C7.1, 302 hp six-cylinder diesel engine, which meets Tier 4 Final and EU Stage V requirements. The company says the new paver is also easier to service, with better access to the pumps and filters. The power unit electrical and hydraulic filtration systems have been completely upgraded and include enhanced monitoring of hydraulic circuits flow pressure and filter conditions, G&Z notes.

Capable of paving from eight feet to 34 feet (2.5 to 10 metres), the S600 can also be outfitted with numerous G&Z options, such as AccuSteer, SmartLeg, TeleEnd and VariWidth.

“The paver has sufficient weight to avoid overloading and to obtain low smoothness numbers, while being agile enough, with the available G&Z productivity features, to give the contractors more actual paving hours on every job,” the company says.
Along with city, highways and airport paving jobs, the S600 can be used for applications such as barrier walls, off-set paving and zero or minimum clearance paving. 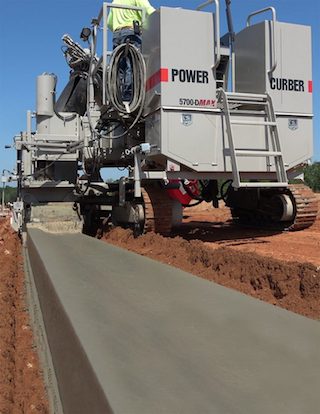 Aiming to provide paving crews with a “one machine” solution, Power Curbers launched the latest model in its 5700 Series this January. The company showed off the new 5700-D, which replaces its 5700-C, at the high-profile Vegas show.

The slipform curb and gutter machine is equipped with the new Power Curbers SlipSmart Control Solution, designed to provide crews with a new level of precision while maintaining simplicity. The tech solution can communicate with 3D systems from Leica, Topcon and Trimble.

With a compact design, the company says the new 5700-D can easily operate around tight spots such as parking lots, islands and cul-de-sacs. At the same time, its design gives operators a clear view of concrete as it exits the mold, allowing them to make the necessary adjustments quickly and cut down on manual rework behind the paver.

Among other tweaks from previous models, the machine’s high-pressure water system uses a new pump operators can leave on without worrying about system wear and provide on-demand high-pressure water from the wand. Power Curbers says the 5700-D’s auger conveyor pivot is also easier to rotate, while the hopper includes shovel holders on both sides.

Early this year, the Wirtgen Group released a new machine to take the lead in its paving train. The company’s new WPS 62i Placer/Spreader, designed to work in tandem with the slipform pavers and texture curing machines following behind it, made its debut at World of Concrete 2020. 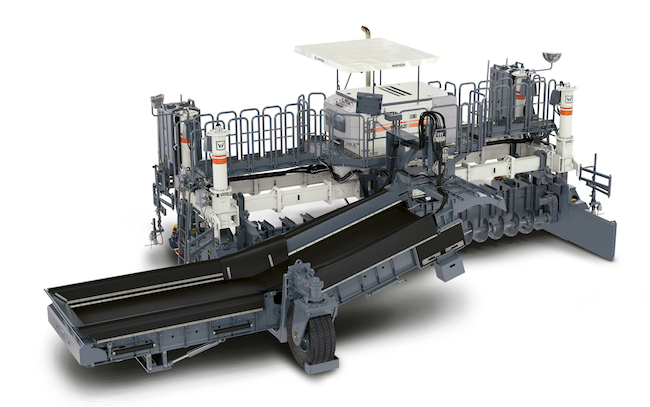 “Thanks to the hydraulically telescoping machine frame and concrete scraper unit, the two-track placer/spreader can be easily adapted to any job site situation,” the company says.

The WPS 62i/WPS 62 feeds concrete supplied from the side and ensures it’s spread homogeneously in front of the slipformer following behind it. Typically, the spreader will be travelling over pre-placed reinforced steel while being fed by a mixer alongside it. The machine has two different scraping units with working widths between 12 and 24 feet (four and 7.5 metres). It’s able to lay concrete up to 20 inches (500 millimetres) thick.

For its concrete feeder, the spreader uses a five-foot, three inch (1.6 metre) conveyor belt capable of speeds of up to 9.8 feet per second (3 metres per second). The height of the feeding unit is hydraulically adjustable, as is the height and angle of the discharge unit.

Related
World of Concrete Preview: What happens in Vegas, could improve your business

Video: Concrete vs asphalt paving, which one wins?