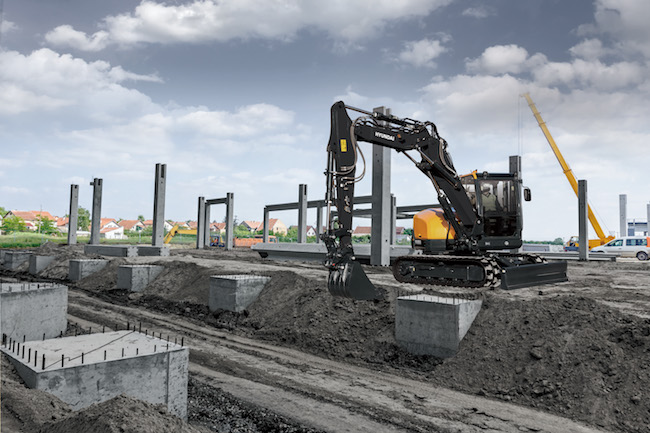 In the not too distant past, compact excavators were often bare-bones, utilitarian machines, built simply to get into the tight spaces their larger brethren couldn’t. Not anymore. Driven by operators demanding more from their small excavators, features once relegated to mid or large machines have migrated into the market for minis.

“Compact construction or utility construction models were formerly your stripped-down version offered by all manufacturers. They were less expensive, didn’t have as many bells and whistles, and reliability wasn’t there either,” says Jonathan Tolomeo, product manager at Komatsu Construction. Today, however, he says the company’s stance on continuous improvement trickles down all the way to its smallest excavator. An operator who goes from a larger Komatsu excavator to a utility-size Komatsu excavator has the same comfort and confidence throughout their workday.

“For a lot of people today, this is their office,” he says. More often than not, operators want a quiet, climate-controlled and comfortable cab, and with labour in tight supply, contractors are eager to oblige.

“The popularity of these machines continues to increase, and that’s due in part to the fact that manufacturers are designing them to do far more than basic digging and excavating tasks,” he says. “Compact excavators now have increased hydraulic flows, enabling the use of a broader range of attachments. As a result, customers are realizing how versatile these machines are, and they’re finding more ways to use them.”

In fact, they’ve even started to supplant other equipment. With the housing and wider construction markets continuing to boom, Mike Fuller, senior product manager with Hyundai Construction Equipment Americas says, compact excavators are among the most important tools contractors have in their fleets.

“Excavators are also replacing skid steers in many applications,” Fuller says, noting their ability to dig deeply without the need for an attachment sets them apart. When breaking up stone and rocks, drilling auger holes and grading in tight spaces, among other jobs, the edge goes to the compact excavator, he says, while acknowledging projects on larger job sites that require more travel time can tip the scales back toward skid steers.

Exactly what’s considered compact, mini, micro, or otherwise, depends on the OEM, but typically, they fall between one to 10 metric tonnes.

For minis to function in cramped environments, there’s no getting around the fact engineers need to squeeze an array of systems into a small package when designing compact excavators. In few places is this as pronounced as in the cab. 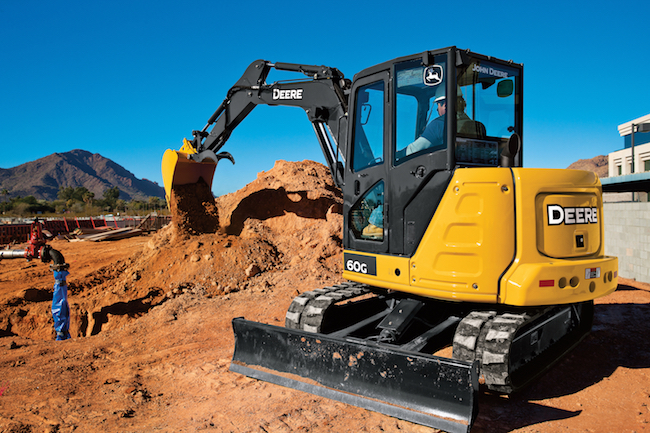 “There’s only so much real estate in the operator station just by nature of the compact excavator footprint,” he says.

“One of the challenges of making mini excavators more operator friendly is less space to work with compared to larger crawler models,” he says.

Doosan has made its cabs more comfortable for operators with improved seats, joysticks, larger displays and more glass for improved visibility, but there are still parameters the machines need to hit. “That requires the physical design, namely the width, of the upperstructure (house) to remain relatively similar to prior iterations,” Kleingartner says.

Despite the challenge, OEMs are keeping the focus on comfort — and operator retention, by extension.

“We’re not taking anything away from the operator environment because the machine is small,” Tolomeo says, pointing to the particular challenge on ultra-short radius machines. “We are still working to make and offer a larger cab for the operators to be comfortable.” 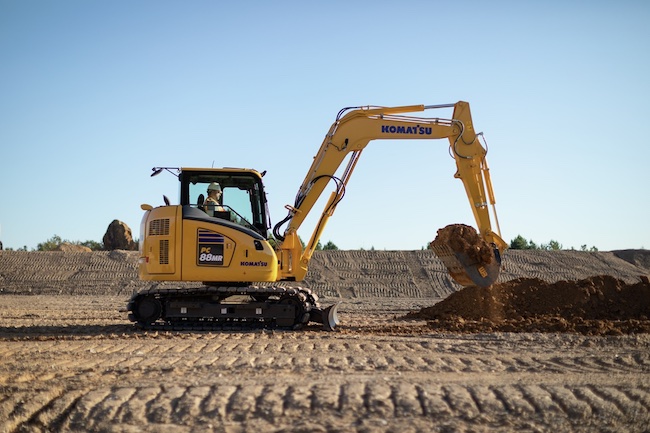 “When you are going to be in a machine for eight-plus hours a day, it simply has to be comfortable,” Fuller adds. Drawing inspiration from the auto industry, Hyundai minis come with features such as heated, lumbar-equipped seats and touch screen monitors. “This not only makes for a happy operator, it makes a safer operator.”

Along with providing operators more space, moving from canopies to enclosed cabs is another key trend in compact excavators.

“A major driver toward the cab enhancements is hiring and retaining operators,” he says. “The field of qualified equipment operators has gotten smaller in recent years. In an effort to keep good operators, mini excavator manufacturers have expanded offerings from larger models to smaller mini excavators.” 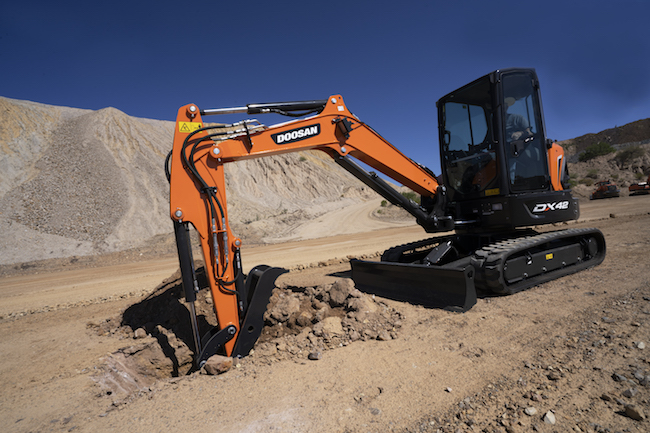 At Bobcat as well, enclosed cabs with HVAC and features such as a heated, high-back seat with headrest are keeping many operators content. Others opt for the more traditional route.

“Some operators may prefer an enclosed cab with auto HVAC, while others may want a more simple machine with a canopy, so it’s important to offer the right solution for every customer,” says Luke Hill, Excavator product specialist with Bobcat.

Keeping costs down while adding features that can make machines more efficient and operators more comfortable is another cross-industry focus. In this respect, technology can become both an additional expense and a cost savings.

Hill points to new in-cab features in Bobcat’s R2 Series — such as a seven-inch touch display and Bluetooth — that appeal to operators and make them more focused on the job with increased awareness of machine issues and service requirements, and hands-free calling and noise cancellation.

Cabs from other OEMs also come outfitted with multi-function monitors, in Takeuchi’s case, up to eight inches. 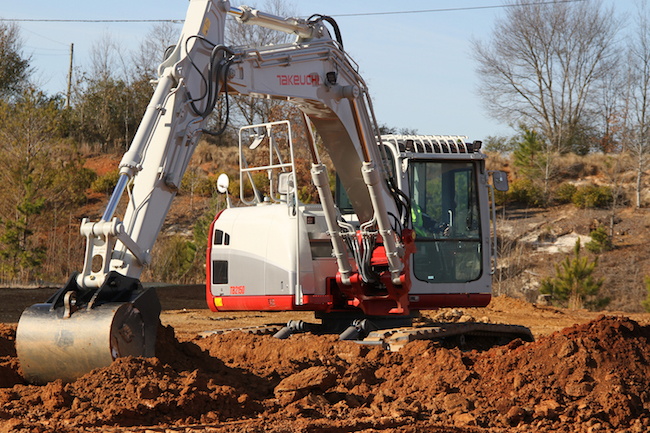 “These monitors provide operators with the ability to set up multiple attachment presets while also allowing them to adjust auxiliary flow rates and, on some models, pressure,” Caldwell says. “The monitors also give operators an overall view of a machine’s health and provide operational data.”

Both telematics and machine control systems are also finding space to grow in the compact market.

“The next generation is coming up with such technology, so they tend to rely on it for one, and secondly, it becomes like our everyday use of GPS, as it is almost second nature because it works and makes life easier,” Fuller says, of machine control systems. He anticipates they will become more and more prevalent on compact excavators as the 2020s wear on. Likewise, Hyundai offers the HiMATE remote monitoring system that lets owners monitor their machine anywhere, anytime via GPS.

In line with the trend toward making minis less utilitarian, Caldwell points to the Takeuchi Fleet Management (TFM) telematics system that comes at no additional cost during the standard warranty period, providing remote diagnostics, machine utilization, machine location and hours worked. He also anticipates the progress toward machine control will continue for smaller machines.

“The need to use these machines in ever-smaller urban workspaces and on congested roadways continues to increase, so including machine/grade control on these smaller excavators makes it possible for more operators and owners to enjoy the benefits of that technology,” he says. 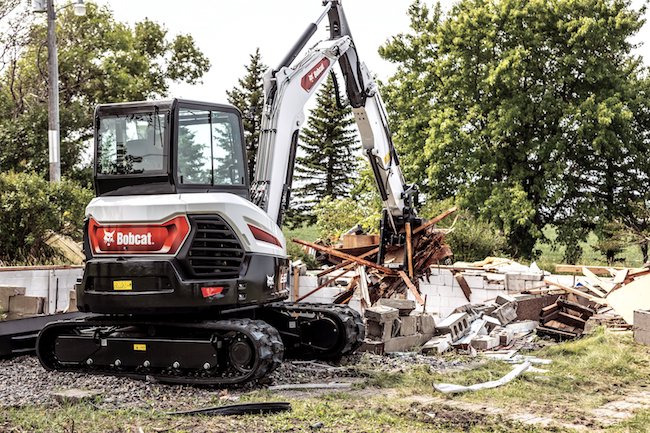 For its part, Bobcat’s Depth Check system has been helping operators get to grade for more than half a decade already. The depth awareness system has also been attracting increased interest in recent years, Hill says.

“This is because of Depth Check’s ability to help make the operator more efficient by helping to prevent the operator from under and over digging which results in costly material waste and unnecessary increased job completion time,” he says.

At Volvo, Ashton sees machine control on the upswing as well, but it is not the only driver in compacts the company is watching.

Though still an emerging segment of the market, Volvo says its new ECR25, an electric compact, “opens the door” to work in low-noise and zero emissions environments.

“The market is evolving to include a heavier emphasis on sustainability as well, so electric machines are a great option,” Ashton says. “And, depending on jurisdiction, early adopters will be able to take advantage of subsidies and grants from some or all levels of government.” 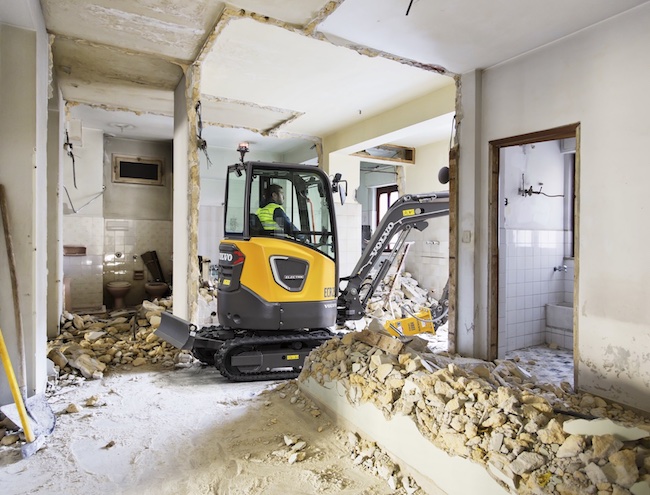 Going electric requires contractors to spend more upfront, Ashton says, but they will save money on fuel and maintenance in the long run.

Doosan is also moving on electrics. The company displayed a prototype of its upcoming electric mini excavator in Las Vegas last year, and plans to launch the DX17Z-5 in North America as early as next year, Kleingartner says.

“An electric machine gives excavator operators the ability to do their work with a machine they’re familiar with but without the inhibitions of diesel exhaust,” Kleingartner says. “The 1.7-metric ton size class was selected for this first model because of customer requests for a mini excavator that could work in confined spaces, requiring a machine with a narrow width to access the site.”

The two new models aren’t alone. Many other electric models are likely to follow as regulations become more stringent, as sustainability becomes a higher priority and as the technology advances.

This article first appeared in the June 2021 edition of On-Site. Click here to read through the entire issue.