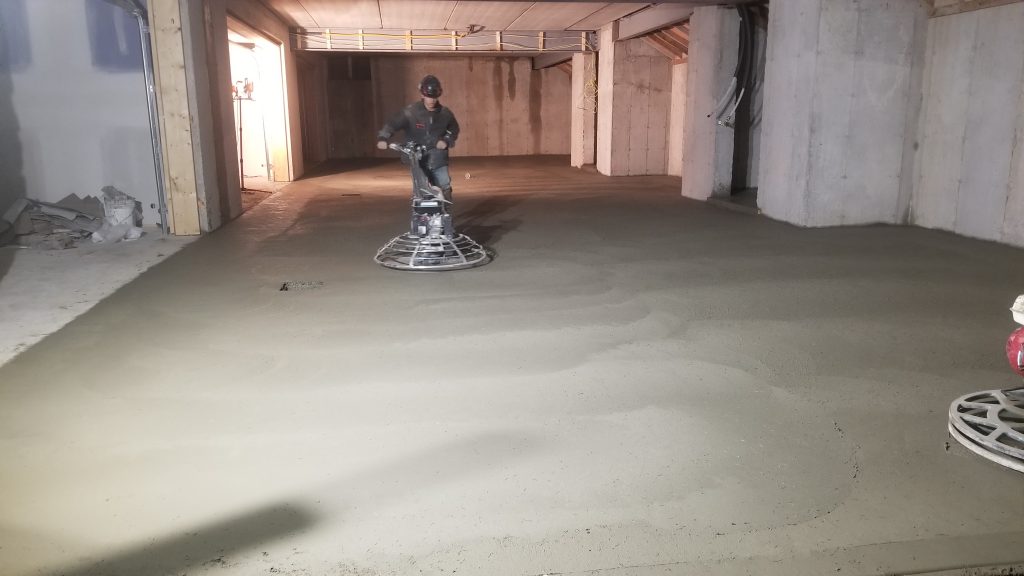 Power trowels are an important tool in the arsenal of concrete contractors, so they can ensure a polished, level finish for the surfaces they are forming. That said, the applications that require these machines aren’t typically easy on them, so a solid maintenance plan is essential for keeping your power trowels in working order and maximizing the life of the equipment.

“The most important thing for the guys to be doing is cleaning their machines every time after every use,” Blazejewski says. “The thing we found is guys are tired by the time they’ve finished at three, four, five in the morning, and leave the machines full of concrete.”

He says that’s a recipe for disaster.

“That’s going to destroy your machine. Best practice is to obviously try and get your guys after every single use to scrape down the machines, flip them up, give them a clean all the way around.”

He has a few tips that help make cleaning the machines as easy as possible.

“We carry around small margin trowels; everybody has got them in their buckets. So, one guy will flip up the handles and you just scrape around the loop, scrape all your trowels off, scrape the centre,” Blazejewski says.

As for the gear box, he recommends topping it up with gear oil once a year.

“There’s also nipples on that allow your blades to go up and down, that’s usually one of the first things that stop to work on there, so you’ve got to grease that every three to four uses,” he adds. “So, carry around a margin trowel or scraper and a grease gun.”

He also suggests keeping oil on hand to perform oil changes on the machines.

“A lot of the time, my guys will just change them on site. They won’t even deal with the shop,” says Blazejewski. “When they feel like it’s had enough hours, they flip it upside-down into a bucket and change it on site.”

While the machines are built to handle the rough applications they are designed for, contractors should still pay close attention to things like the spider plates.

Over his 20-plus years of working in the world of concrete, Blazejewski has operated and owned his share of power trowels. Currently, his company has three ride-on power trowels and 14 walk-behind power trowels.

“They’re made pretty well. We tend to use a lot of Bartell equipment. We’re also just striking into some Italian equipment called Barikells, which are very nice machines because they make a custom machine that’s 30 inches and a ride-on, so you can sit between doorways,” he says.

“There’s manual and hydrostatic drive. Manual is all controls with gears you move back and forth,” Blazejewski says. “And then electronic-driven, hydraulic-driven, those are just joysticks. That’s when you’re looking at spending $40,000 for a machine.”

He adds that there are also machines starting to come to market that are remote controlled, but he’s personally not sold on that concept.

“I don’t know how much I believe in that, because to me you’ve got to see your floors when you’re working it,” he says. “I’m not sure what kind of quality a guy gets when he’s standing 30 feet off the slab looking at his machine run around.”

He prefers to be much closer to the action.

“You’ve got to be over top of your floor and see the quality you’re putting into it. You can see the holes you’re missing, rocks popping, anything like that. You’re not going to get that when you’re 30 feet away,” he suggests. “It’s hard enough to see that when you’re on top of it.”

Blazejewski says buying a power trowel is not unlike purchasing a car. When buying used, he says it is necessary to take time to thoroughly inspect the machine and look at its general condition. If it hasn’t been maintained properly, it’s bound to fail.

“If it looks like in its rough condition — if they’re not cleaning the machines, they’re not greasing them and oiling them — most likely it wasn’t taken care of,” he says. When purchasing a power trowel, also keep in mind the type of applications it will be used on.

“Look at the size of the project, if they have a big enough floor, you might want to be looking for a 48-inch, ride-on power trowel. If you’re doing small basements, maybe a 36-inch power trowel,” Blazejewski says.

Bottom line, whether a contractor buys a power trowel new or used, if they take care of it, it should run for a while.

“There’s really not much too them, so, if you regularly change your oils and grease your fittings, they’ll last you quite a long time,” he says. “We’ve had some machines that have been running 10, 12, 13 years every day on a jobsite with no issues with them… you can get 10 to 20 years out of a machine if you maintain it properly.” 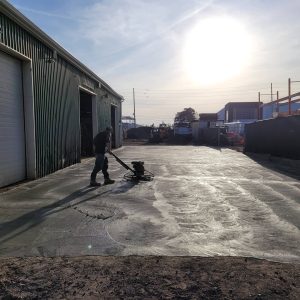 When it comes operating power trowels safely, the main thing is to maintain good jobsite awareness. Blazejewski says that knowing potential hazards where the power trowel is being used is an absolute necessity.

“Stay away from things like rebar and hazards, know your surroundings,” he says. “One of the biggest dangers with walk behinds is walking backwards with it and stepping off an edge, or tripping over a piece of rebar. When not keeping an eye on what’s around, I’ve seen lots of guys trip and fall.”