Silica dust on the job site: Inconsistent regulations force the industry to play catch up 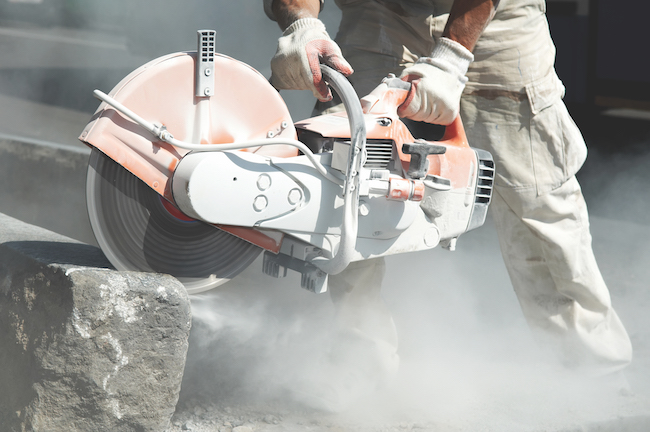 The jobs that lead to silica exposure aren’t avoidable, but vital aspects of construction

It takes decades of breathing in the fugitive dust created by drilling, cutting and grinding concrete, stone and other materials containing crystalline silica for silicosis to scar and harden the lungs. The incurable disease is one of a handful caused by inhaling the ubiquitous mineral in its most hazardous form: respirable crystalline silica (RCS).

Unavoidable jobs, such as power cutting, demolition, excavating and rock hauling, to name a few, unearth the dust — and in the absence of sufficient protective measures, workers are vulnerable to its health effects, which include autoimmune disease, chronic kidney disease, lung cancer, and of course, silicosis.

In Canada, the regulations and occupational exposure limits (OELs) that govern silica dust often differ from province to province. While they’re designed to protect frontline workers, the set of disharmonious safeguards can become a bureaucratic nightmare that trip up management and create uncertainty for workers.

Even well-meaning contractors that make it their business to understand and follow silica dust regulations often run into trouble, according to Mike McKenna, the executive director of the B.C. Construction Safety Alliance (BCCSA).

Though they may have mastered regulations in one province, they frequently need to adopt entirely different benchmarks when bidding a job in another province.

But with workers’ long-term health on the line, it’s not an issue regulators, companies or frontline workers can afford to ignore.

Oftentimes, whether or not a worker is over the limit is dictated by location.

“When it comes to different occupational exposure limits, both how it’s measured and the actual OEL, it becomes more difficult for… workers to know whether or not they’re actually over-exposed,” says Dan Curts, lead health and safety application specialist for 3M Canada’s Personal Safety Division.

“They think they’re actually meeting the legal limit in the one province, and they are, but they move to another province, nothing’s really changed and they’re doing the same job but in fact they’re over-exposed.”

With the exception of Yukon, OELs for silica dust are based on the threshold limit values (TLVs) set by the American Conference of Governmental Industrial Hygienists (ACGIH).

While provinces such as Manitoba, Newfoundland and Labrador, Nova Scotia and Prince Edward Island automatically adopt the ACGIH TLVs, others have a specific review process.

That process can include a review of currently available scientific studies, exposure information from industries, available methods and instruments for determining exposure levels and the ability to meet lower OELs.

Limits may also vary due to the types of industries present in a province or territory and the economic impact on those industries, says Anna Dalipi, technical specialist at the Canadian Centre for Occupational Health and Safety (CCOHS).

Timing introduces another factor. British Columbia and Ontario review the OELs every year, while Alberta reviews every five years. New Brunswick and Quebec, meanwhile, don’t have a specific review period.

“By province, there are so many different regulations for exposures,” says Rick Tunks, safety program manager for HD Supply Brafasco. “There’s talk that Ontario will be lowering [its OEL]… And I think when that happens it’s really going to shake everybody up.”

Dalipi says there are no proposals to regulate any industry using a central federal regulation as far as CCOHS is aware, but adds that the Canadian Association of Administrators of Labour Legislation is currently looking into synchronizing some of the provincial and territorial health and safety requirements.

“Asking all the provinces to agree as to what they should put into a harmonized piece of legislation around health and safety? Very difficult; they have not been able to do that. They’ve been talking about this for close to 20 years… Would I like to see it? Absolutely. Is it likely in the near future? No, probably not,” Curts says.

Many provinces and territories issue guidelines, codes of practice or tools to help employers meet regulations for silica dust, Dalipi says. For example, Newfoundland and Labrador has issued a code of practice under its legislation, while Ontario and British Columbia have issued guidelines.

“B.C. led the way in this,” says Brian Ferguson, director of Health, Safety & Environment at EllisDon’s Civil Division. “I think since about 2014, and it could be even prior to that, we’ve had to have proper silica controls and policies and plans in place at many of our projects in B.C. We’ve adopted those templates and made them available within our corporate library.”

With limited data available, the BCCSA developed the Silica Control Tool, which uses data collected by a team of researchers at the University of British Columbia School of Population and Health to determine exposure levels and generate a control plan.

McKenna says he hopes to take the tool coast-to-coast — a goal made more complex by varying regulations across the country.

“It just makes it even harder to achieve our collective goal… to keep workers safe and free from health and safety risks,” he says. “It’s going to take some really dedicated people because, if I can be candid, whenever you insert money, things can get a bit complicated.”

Despite efforts to educate workers about the hazards of silica, it can be difficult to translate complex legislation to individual employees on the job site, especially for an industry comprised of mostly small employers, McKenna says.

While McKenna has donned his “optimistic hat,” he admits harmonization will require political will.

“If we kept the goal pure, and the goal should be worker health and safety, we could get things done relatively quickly. But you need champions at the regulatory level. Problem is, everybody is interested in their own house and not anybody else’s,” he says.

“We as a country can take a real leadership role and ensure silicosis doesn’t become the next asbestosis or the next mesothelioma. We can take strategies now to protect workers against the devastating disease of silicosis.” 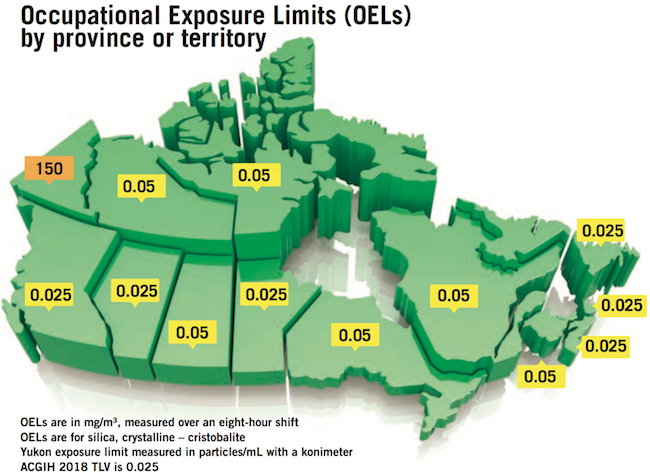 According to Carex, a research institution that tracks carcinogens, approximately 380,000 Canadians — mostly construction workers — are regularly exposed to silica at work. Regardless of the province or territory, it’s the employer’s responsibility to protect workers from harmful RCS exposure.

“Once you get past the regulatory speak, it is pretty simple,” says Steve Ipek, marketing manager at Bosch. “Have proper masks, have proper tools, have proper signage and make people aware that there is cutting going on on the job site and that there will be dust in the air so that they have the option to put on a mask as well.”

When it comes to silica control measures, Tunks says personal protective equipment (PPE) should be a last resort.

“The best way would be to try and use products that don’t contain silica, thereby eliminating the hazard,” he says, adding that the next best method would be to “administrate the hazard out.”

“Maybe you can rotate that individual from a job that might contain silica to another job, instead of giving that person an eight-hour exposure to it,” he says.

The third approach is to “engineer the hazard out” with the use of tools, which he says will protect the worker and speed the job up.

“More than half the time on the job site is clean up and it’s not value added work… but it’s required. If you can minimize the amount of clean up time, the amount of wasted labour on collecting dust and sweeping and what not, then you’re more efficient and you’re making more money and you can move onto the next job quicker,” Ipek says.

The concentrations of RCS will determine the appropriate protective measures. For example, Tunks says a powered air purifying system will offer a high level of protection. When levels rise, a conventional half facepiece with a P100 filter would not suffice and a full facemask would need to be worn.

“It’s not just the lungs that we’re concerned about,” Tunks adds. “When we talk about hazard assessments… we look at the whole body. We’re looking at the eyes, we’re looking at the skin, we’re taking everything into consideration when we try and choose the best products suited to each application.”

Manufactures and distributors like 3M, Bosch and HD Supply offer a slew of products to control RCS concentrations, such as power tools connected to HEPA filters, which capture the hazard at source.

“I think one of the most important things is continuing to educate the workers about various hazards, silica being one of them. I think we have a much more knowledgeable worker population than ever before,” Curts says.