How geofencing and virtual fencing improve excavator safety and performance. 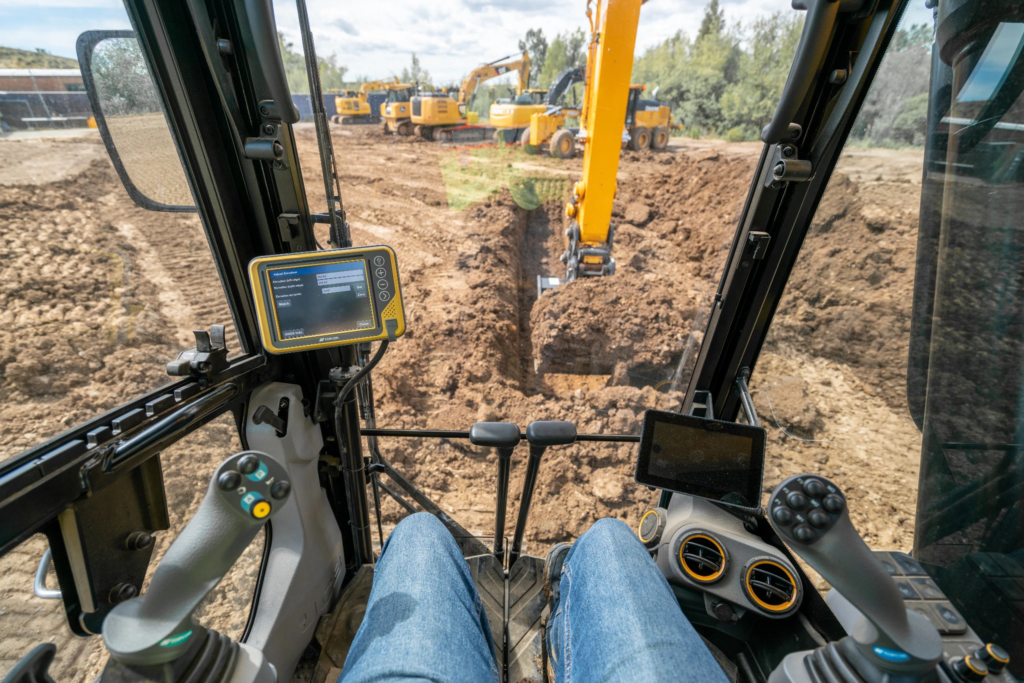 Excavators tend to be one of the flagship machines in any construction fleet. This means that there is considerable interest from the machine owners and the operators any time that new technologies or features are developed that promise to enhance a machine’s capabilities.

“Whether it’s road building, site development, underground utilities—you name it—the excavator is typically the lead machine on the jobsite. So, the excavator operator is usually one of the more experienced operators on the jobsite—coordinating this orchestra of work happening around them,” states Justin Steger, solutions marketing manager for Site Development and Underground at John Deere.

Given their importance, OEMs have devoted considerable resources to developing high-tech tools to enhance excavator performance and safety.

One of these tools, virtual fencing, has recently become an increasingly common feature in controls offerings from the major machinery manufacturers. Another technology, geofencing, is also quickly gaining widespread acceptance in excavator circles. 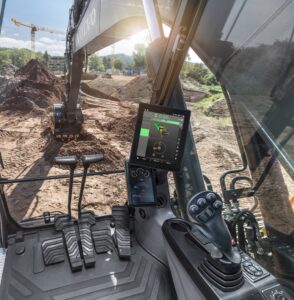 Virtual fencing allows the operator to program in height, depth, and width limits on their machine to prevent boom, bucket, arm, cab, or body overreach. If a pre-determined boundary is attained, an audio or visual alarm is activated. On some systems, the machine may also be automatically slowed down.

Geofencing involves programming a “digital barrier” around a machine or worksite to track movement. 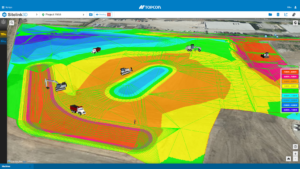 “Geofencing is separate from virtual fencing technology. Geographic or geofencing is done through telematics. It’s looking at the machine GPS coordinates for location; where the machine is at,” explains Steger.

“If you put a geofence around your jobsite, and a machine leaves the jobsite, the system will send alerts,” explains Mike Wehling, product manager for Sitelink3D Services at Topcon Positioning Systems, as he outlined the obvious benefits of geofencing.

“It will also ping wherever that machine is, once outside the geofence. You will continue to get updated positioning as where the machine is,” he adds. “If someone is hauling it to Mexico, you’re going to be able to track it.”

A leader in tech-based measurement and workflow solutions for construction equipment, Topcon offers two different applications that use geofencing for different purposes: Sitelink, the company’s wireless data management system, and its Tierra telematics line. In addition to preventing thefts, Topcon’s geofence solutions can also be used for other purposes.

“Sitelink uses geofencing for tracking machine productivity and tasks. If I’m hauling material from one area to another, we use geofences to define the regions,” says Wehling. “Geofencing is also used by our Tierra products for telematics information: machine hours, fuel burn, all the metrics and machine information you might get through a telematics system.”

“With JDLink, one of the features in there, other than seeing fuel burn, machine hours, etc., we have geofencing capabilities that can be set through the JDLink dashboard,” states Steger. If an excavator unexpectedly passes through a geofence, or if it is turned on outside a pre-set “curfew,” the system will issue an alert, he adds. 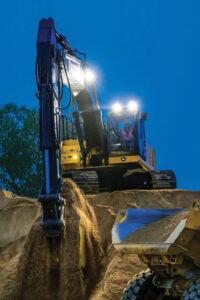 The company’s 210G LC, 350 P-Tier, 380 P-Tier, and 470G LC excavators are also fitted with Inertial Measurement Units (IMUs), which Steger says is “a fancy name for a sensor.” The IMUs, working in tandem with SmartGrade, allow an operator to program the virtual ceiling, floor, wall, front and swing limits for the machine.

“If you know the power line is 22 feet high, you might want to raise your boom to a safe height. Give yourself maybe [a few feet] below what you’re trying to avoid,” says Matthew McLean, product manager for Dig Assist at Volvo Construction Equipment. “Once the feature is turned on, it will prevent the boom, arm, bucket or whatever happens to be at the highest at that point, from breaking that ceiling.”

Depth limits are for “customers worried about underground utilities. If you dug down to a certain limit and think there might be a gas line … it will prevent the bucket from going below that point,” he continues. 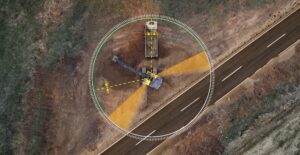 Two other features, Swing Control and Swing Fence, are useful for loading applications. Swing Control entails soft stops with swing motion automatically halted at a pre-set position. If desired, the operator can override a Swing Control stoppage, whereas Swing Fence provides a hard stop that cannot be overridden.

Caterpillar offers its Cat Grade control for grading purposes and Cat 2D E-Fence for virtual fencing. The latter solution includes E-Ceiling, E-Floor, E-Swing, E-Wall and Cab Avoidance features, and is standard on Caterpillar non-GC excavators from the 313 to 395 models. 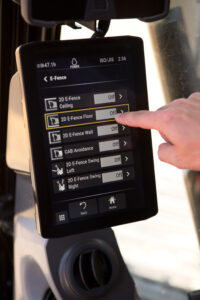 “The main objective is obviously safety. Often, compact radius excavators are working on the road and there’s live traffic on one side or the other. [E-Fence] can prevent the machine from swinging into live oncoming traffic, due to inadvertent stick movement,” states Ryan Neal, product application specialist for North America Caterpillar. “Anything we can do to prevent anybody from getting injured is our number one goal. E-Wall, E-Swing, E-Ceiling, Cab Avoidance—all of them can help that.”

Caterpillar’s E-Fence solution is also designed to be user-friendly, with “shortcuts within the monitor” designed to make it easy to adjust settings, adds Neal.

“In our SmartGrade monitor, you can set shortcuts on how to get a virtual fence limit faster. That’s all found in the operator’s manual. As jobsite conditions change, we don’t want you to have to go through multiple touch points,” says Steger.

User-friendliness and the ability to quickly see the set limits is also a key selling feature cited Volvo about its Active Control system.

“When you’re setting up a boundary limit function, it takes up the whole screen. You have a picture of the excavator. It depends on whether you’re doing swing, height, or depth whether it’s a top view or a side view,” says McLean.

Regardless of which OEM produces the best system, there is widespread agreement about the importance of geofencing and virtual fencing. Virtual fencing is particularly noteworthy for making excavator applications safer and more productive.

“If you think of everything that [excavator] operator has to monitor based on the work that’s directly in front of them, while also monitoring their surroundings, adding this technology and allowing them to set limits to be notified as they approach them, it really kind of takes a couple things off their plate,” states Steger. “They can focus less on their surroundings; the machine is doing that for them, so it’s going to improve safety. It’s going to improve efficiency, because I know I can swing until the machine starts telling me I’m getting close to something.”

Nate Hendley is a freelance writer and author, and is a regular contributor to On-Site Magazine.