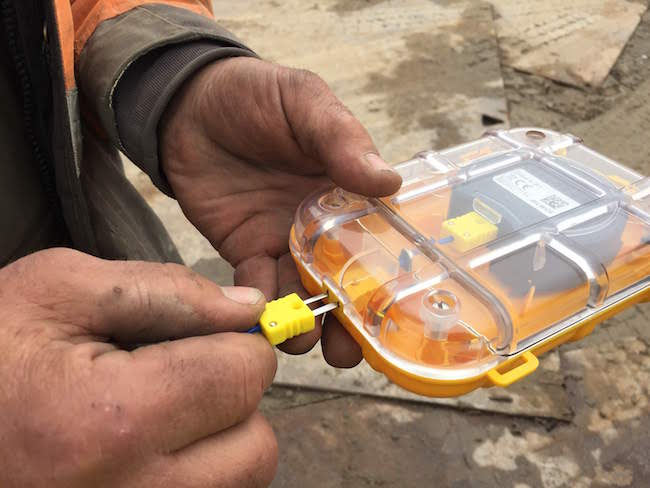 Breaking concrete cylinders to test the compressive strength of concrete is standard practice for a reason. It’s relatively simple, cheap and when done right, accurately reflects strength. At the same time, break tests have changed little for decades and this lack of innovation is catching up with the commonplace method.

Propelled by lower cost electronic components and improved connectivity, a new wave of wireless sensors, capable of delivering the same metrics as break tests — but doing so in real-time — is carving out an increasing share of the market.

Not needing a technician to collect field-test cylinders and lug them to the lab is just one small part of the value proposition, says Aali Alizadeh, co-founder, president and CTO of Ottawa-based Giatec Scientific Inc. The company first introduced its SmartRock sensor five years ago and the tiny wireless devices are now encased in concrete on more than 6,000 job sites worldwide.

“Things have not changed in a long time and the new generation of engineers are demanding technology,” Alizadeh says, adding that once concrete crews try out the sensors, there’s no going back. “‘Why have I been breaking cylinders throughout my career?’” he says, is a question he has heard over and over.

With the ability to measure both concrete temperature and strength in real-time, Kris Till, technical sales manager for Kryton International Inc., sees sensors coupled with cloud technology as the next evolution for the concrete industry.

“In a lot of infrastructure and pretty much all big mass concrete pours, there is a need to understand, record and log temperature data,” he says. “We’re finding for a lot of contractors involved in these projects, this is a really easy way for them to be able to log the data better.”

“The strength development piece is really critical [too] because it can add so much benefit and so much time savings to the project,” he says.

Like other sensor technologies, Kryton’s Maturix sensors use what’s known as the maturity method to calculate strength. The process plugs a range of data points gathered by the sensor, such as time and temperature, into an equation and calculates maturity via the cloud.

Though it’s a relatively new offering for the Vancouver-based company, best known for admixtures, Till says the market response to Maturix has been enthusiastic. Kryton acquired a 30 per cent share in Denmark’s Sensohive Technologies ApS last fall in a deal that granted it exclusive North American distribution rights.

It’s not the only company moving into the space.

Power tool and fastener maker Hilti has also recently stepped into the sensor market. This March, it purchased substantially all the assets of Boston start-up Concrete Sensors, adding the entire Concrete Sensors team to its Anchors division.

“Concrete cylinders, while industry accepted and fantastic for determining what the concrete strength is on the day the cylinders are broken, are generally inadequate for helping the general contractor move faster,” he says. “And in the end, moving faster means less days on the job.”

For Brendan Dowdall, who co-founded Concrete Sensors in 2015 and now serves as its director under the Hilti banner, the push toward the technology came when working as a general contractor. Unable to keep track of the metrics he wanted at his disposal when pouring concrete, he set out to find a better way to collect them. 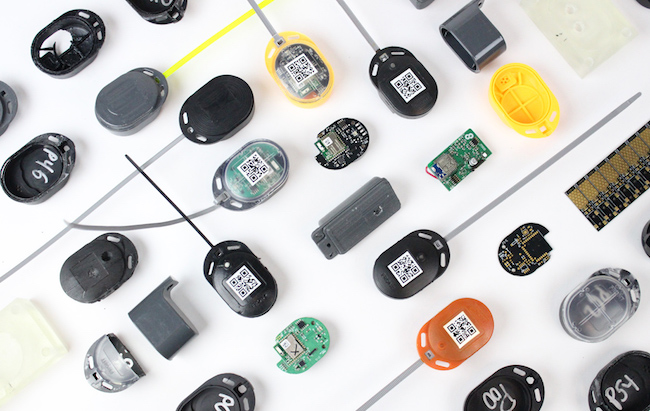 The solution starts with the sensor itself. Before the pouring process, the wireless device, which the company calls NovoConcrete, is fastened to the rebar. Crews then carry out their pour as normal, fully embedding the sensor in concrete.

Hilti Concrete Sensors makes two different versions — one that transmits temperature, strength and relative humidity data to a phone or tablet via Bluetooth, and another designed for longer range that sends the metrics to a hub station, which in turn, transmits them to the cloud. Neither requires wires.

“Wires can sometimes be clipped, or accidentally stepped on and you can have higher failure rates,” Dowdall says. “By going completely wireless, you can increase that reliability and save headaches.”

Though this also means sacrificing the sensor, he says lower hardware costs over the past 10 to 15 years make entombing the sensor a small price to pay for the data provided. The real-time information often lets contractors move on to the next stage of work instead of waiting for lab confirmation their concrete has reached the required strength.

Along with pulling the data into a cloud-based analytics platform, Hilti Concrete Sensors also tests contractors’ mixes in its lab to better ensure its providing accurate strength data.

All jobs are different, Dowdall notes, but says the company’s technology typically records up to a 10-x return on investment. Time and labour make up the bulk of the savings, but the efficiency gains can also translate to more work.

“If [contractors] can go into a project during bid or estimating and instead of saying that the concrete’s going to take six weeks, now it’s only going to take four weeks, that gives them a strategic advantage,” he says.

With Maturix, Kryton has taken a slightly different approach. The system puts similar information into the hands of contractors, but uses low-cost thermocouple wires as the sacrificial component. One end of the wire is secured in concrete during the pour, while the other is connected to reusable sensors/transmitters that automatically send data to the cloud.

Running on Sigfox’s 0G network, well known for its use in the IIoT space, the sensors can keep on- and off-site staff dialled into progress, ensuring quality and letting managers move up work when concrete has reached strength. 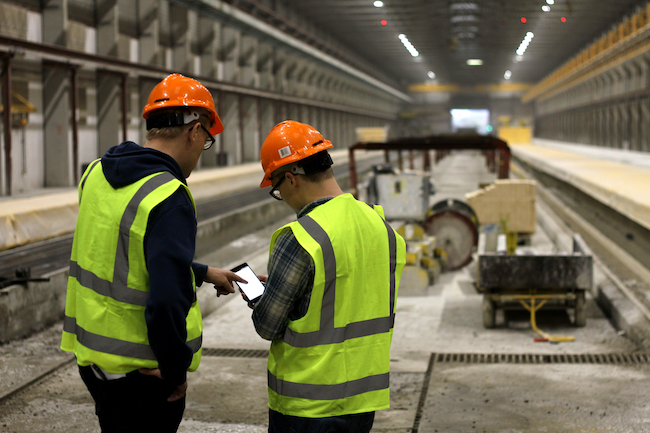 Typically, wireless sensors record a range of data points, plug them into an equation, and calculate maturity via the cloud. PHOTO: Kryton

Till says the use of thermocouples lets contractors set multiple sensors in different areas of a pour without worrying about the cost.

“The limitation of the technology to date has really been the fact that a lot of the devices on the market are single-use devices,” he says. “So you’re taking a fairly expensive sensor and you’re burying it in concrete and it’s gone. So, it was limited as to how much you can use it.”

Along with the schedule-related benefits, Till says nearly everyone using the sensors for the first time is able to quickly identify new ways to work smarter. One contractor, for instance, quickly realized he was overpaying for his concrete. “He was buying a mix design that was high early strength when he didn’t need it,” Till says. “He was getting strength well before his schedule allowed.”

Now in their third generation, Giatec’s SmartRock sensors also continually send concrete data to the cloud, but do so while entirely embedded in concrete. Alizadeh acknowledges costs can be higher compared to reusable systems, but he says the peace of mind of knowing the data is secure offsets the added investment.

“The value in time and ease of use is so high, especially for contractors who are on a tighter schedule, it doesn’t really matter,” he says.

For the latest version of the sensor, released earlier this year, Giatec boosted the wireless signal strength by about five times, made on-site activation simpler and enhanced its cloud dashboard to give contractors more details on about performance at each stage of projects.

And though it’s fixated on concrete, Giatec is also looking at projects as a whole. 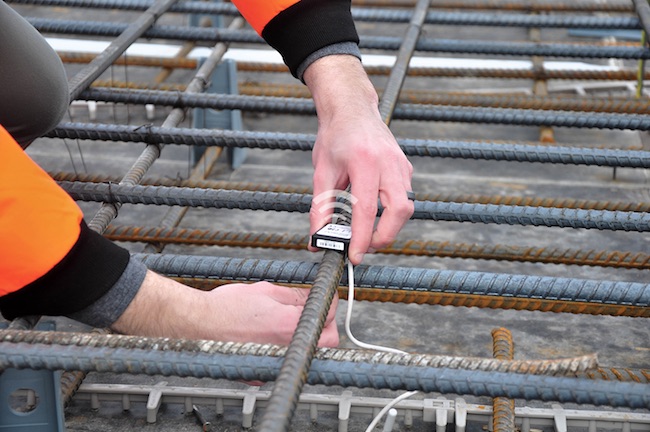 “The concrete data is a small piece of the puzzle,” Alizadeh says. “On a construction project, there’s so much going on. The project managers, the superintendents, their daily activities involve collecting all kinds of data.”

“They have project management software, like Procore, to record and capture and communicate that. It’s a no-brainer for us we need to bring this concrete data as part of those platforms so they can see in one single dashboard all their data and make more informed decisions as quickly as possible.”

Among other platforms, the company integrated with Procore in 2018, and it released its application programming interface (API) to allow other software tools to integrate more easily with its sensors last year.

As contractors look increasingly to technology to cut down on labour and trim costs, Alizadeh sees concrete sensors becoming a standard tool on job sites.

Likewise, Till says the demonstrable benefits of sensors are beginning to tip the scales. He doesn’t anticipate crush tests disappearing overnight, but says the growing industry awareness of sensors — and the maturity method — are shifting the industry toward accepting a new way of keeping tabs on strength.