Roadworks work for the economy

As inflation rises, and with it, economic uncertainty, here are five projects to watch as construction continues across Canada. 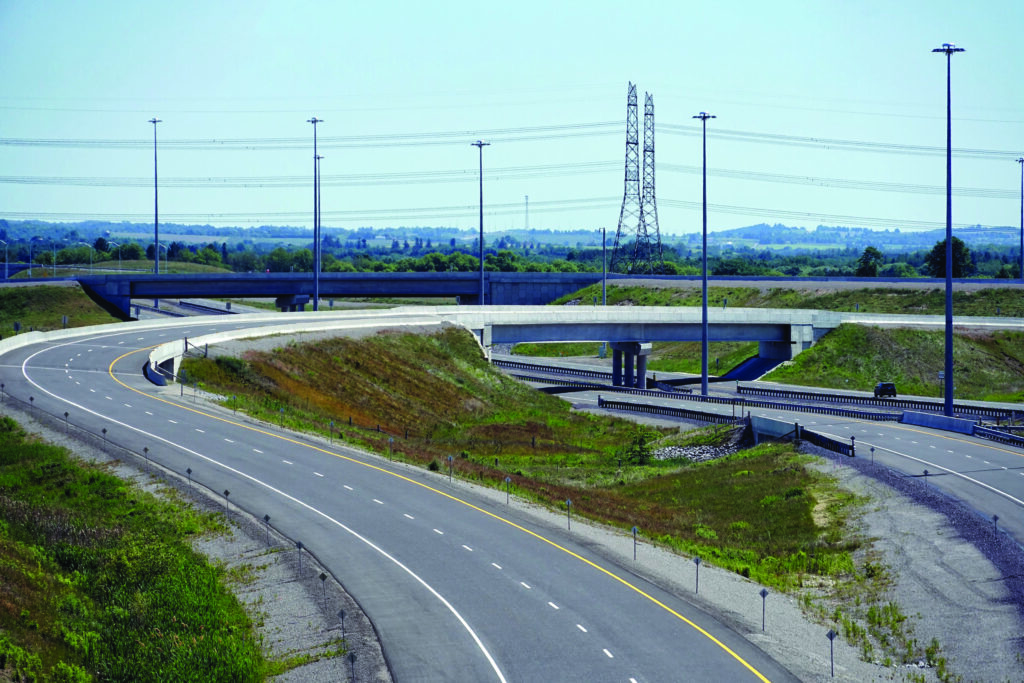 When Doug Ford’s Conservative government was re-elected in Ontario this past June, that province’s on-again, offagain plan to build Highway 413, a new route across the north end of the Greater Toronto Area, received a significant boost; or so it seemed.

Over the years the 59-kilometre corridor has had its ups and downs. It has been touted for its potential to ease gridlock yet derided for the environmental footprint it would leave across a sensitive greenbelt that successive governments have pledged to protect.

During the month-long campaign, pundits billed the vote as a referendum about the highway, which would skirt around Brampton and Vaughan. However, with information about species at risk living along the proposed route coming to light after the election, the project remains on precarious ground.

Still, despite a range of environmental, economic and geopolitical pressures, many road, bridge and tunnel projects remain ongoing and look to keep road crews busy across Canada over the next few years. While not an exhaustive list, the following spotlights and profiles in five regions across the country help highlight some of the ongoing prospects for roadbuilding that will be happening in the coming years. 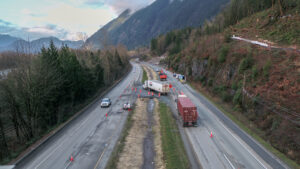 (åPHOTO: COURTESY OF B.C. MINISTRY OF TRANSPORTATION AND
INFRASTRUCTURE)

Construction of the Highway 99 Tunnel, rebuilding flood-damaged highways, and multiple side-road projects are keeping B.C. roadbuilders busy, but Highway 1 continues to lead the way as a multi-year road improvement endeavour.

The details vary by segment, but the overall goal is to improve safety and expand one lane in each direction to two while building barriers and landscaped medians to support a 100 kph speed limit. Much of the work also includes expanding brake check areas, adding acceleration and deceleration lanes, improving passing opportunities to accommodate increased traffic, and enhancing active transportation.

Work is being completed in phases and has been underway for nearly a decade. Segments immediately east of Kamloops are long done, and a two-kilometre stretch east of Revelstoke at Illecillewaet was finished in November 2021. Construction is also progressing on new four-laning segments in Chase and Salmon Arm.

Three phases of work through Kicking Horse Canyon have similarly widened 21 kilometres of narrow, winding two-lane highway across some of Canada’s most mountainous terrain, and a $440.6-million design and build contract has been awarded to Kicking Horse Canyon Constructors for a fourth 4.8-km section. The consortium for this segment includes Aecon Group, Parsons and Emil Anderson Construction. Work is slated for substantial completion in winter 2023-24.

“The work continues to bolster the western trade corridor we keep talking about,” he says. “This is a critical artery. All communities will benefit from the improved, efficient, safe road system, with better access to health care, education and supplies.”

In announcing a three-year, $1.5 billion plan for Manitoba’s network of highways, Manitoba’s Transportation and Infrastructure Minister Doyle Piwniuk emphasized the importance of the routes to trade and commerce.

While ongoing work on the northsouth Highway 75 corridor is designed to improve access to and from U.S. markets via North Dakota, the Winnipeg Perimeter Highway is a key project for which investment is expected to ring in at more than $346 million.

“Our government recognizes targeted investments in roadways and bridges are foundational to our economic growth and the quality of life for all Manitobans,” Piwniuk said in an April budget announcement. “Advancing our highway network will enable market access for international, interprovincial and regional movement of goods, and will position our province to become a national transportation hub.”

“Manitoba’s economy relies on trade for about 54 per cent of its GDP, and the Perimeter Highway and Highway 75 are two of the key trade gateways and corridors in the province,” says Lorenc. “The fact that the province has identified, or is in the process of identifying, trade as an economic-enabling instrument is important, and we’re glad that the Perimeter is getting this kind of attention.”

With a new interchange at St. Mary’s Road underway, and another at McGillivray Boulevard set to go, Lorenc anticipates improvements to overall traffic flow.

“The federal government has allocated $640 million to enhance trade gateways and corridors over the next five years, which is a drop in the bucket,” Lorenc says. “There’s no national plan recognizing that 66 per cent of Canada’s GDP is generated by trade.” 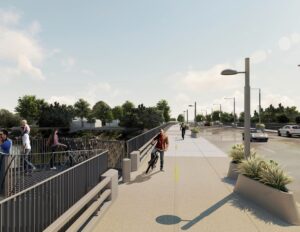 (PHOTO: COURTESY OF THE CITY OF MONTREAL.)

The Ile-aux-Tourtes bridge in Montreal and Ile d’Orleans bridge near Quebec City stand to keep work crews busy for the next few years. Of particular note, however, is a new bridge being built to replace the aging Jacques-Bizard Bridge, which dates to 1965 and is the lone road link between Montreal and Ile Bizard.

The $85 million structure, first approved in 2015 and slated to open in 2023, with landscaping and finishing work to carry into 2024, is to be located next to the existing bridge and is intended to address increased congestion by enabling 30,000 vehicles to cross the Riviere des Prairies on a daily basis while facilitating active travel with a two-way bike path and a widened sidewalk.

The lead contractor on the project, EBC Inc., started work this past spring. The project will see approaches to adjacent intersections redesigned and a fourth vehicular lane added to end the need to continually change the directionality of a middle lane.

Electrical networks and cabling and sewer and water lines are also being installed and renewed to improve services on the island. The new bridge will also include a lookout, which is being installed in the middle of the bridge, and the adjacent Parc Denis-Benjamin-Viger is being redeveloped. Urban furniture will feature throughout the structure.

“This project is a fine example of efficient economic stimulation,” says Gisele Bourque, CEO of the Quebec Road Builders and Heavy Construction Association. “These are structuring projects that put several types of jobs and businesses to work. Starting with general contractors and their subcontractors, this type of project involves several specialties … and also requires the involvement of many suppliers.”

“Investments in public infrastructure are necessary for a healthy economy, not only in times of crisis but also in times of economic growth,” she says, noting that the construction industry is a major economic force in the province. As a whole, it represents 14 per cent of Quebec’s GDP. 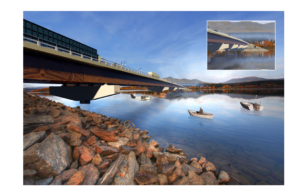 When blasting started earlier this summer, the Yukon government heralded the $160-million replacement of the Nisutlin Bay Bridge as critical to the local community, territory, country and continent.

The bridge, billed by the government as the largest capital project in Yukon history, crosses Teslin Lake north of the Yukon-B.C. border and keeps traffic flowing along the Alaska Highway, a major artery for travel, goods and essential services.

The original bridge, built in 1953, was aging, and the government wanted a modern-day structure to accommodate increased traffic volumes, including trucks bringing goods and services to the rest of the territory and into Alaska.

The new concrete and asphalt bridge was designed in collaboration with the Teslin Tlingit Council, which signed a project charter with the territory to formalize plans to minimize disruptions from construction and maximize local economic benefits.

The new bridge will be 483 metres long, nearly 13.5 metres wide to accommodate heavier truck traffic, and will include two lanes of traffic, a widened shoulder for cyclists, and a sidewalk that’s lit and separated from traffic. A walkway will also be built underneath the bridge so pedestrians and snowmobiles can cross safely.

Project spokesperson Krysten Johnson, from the Government of Yukon’s Department of Highways and Public Works, says local employment is key to the project and Graham Infrastructure, the lead constructor, has committed to prioritizing hiring Teslin-based businesses, contractors and tradespeople.

“This specific project will ensure a number of local opportunities and community development opportunities including involvement in environmental monitoring, gravel pit development, and the design and installation of artwork to be installed on or near the new bridge,” Johnson said. Project completion is slated for early 2026, and the current bridge, in service 20 metres away, will be demolished when that happens.

Highway 413 may be facing uncertainty, but road signs along Highways 400 and 404 declaring “The future site of the Bradford Bypass” suggest shovels may soon be on their way to the Greater Toronto Area’s northern reaches. While still at the planning stage, this 16.2-kilometre route linking the two north-south highways enjoys relative support with far less opposition than what Highway 413 has faced.

Plans call for a 100-metre-wide rightof- way with four lanes and a mix of grass medians and concrete barriers.

The Ontario Ministry of Transportation (MTO) has retained AECOM Canada to coordinate work on the preliminary design, including a provincial environmental assessment. And, with no federal assessment expected, provincial projections call for design completion by early 2023.

Andrew Hurd, director of policy and stakeholder relations with the Ontario Road Builders’ Association, says the bypass was included in this past spring’s provincial budget and, while the post-election budget had yet to be reintroduced at press time, the government looks poised to reintroduce largely the same document.

“Government projections indicate that commuters using the highway will save up to 35 minutes and that construction will support an estimated 2,600 jobs per year during construction and generate an estimated $274 million in annual GDP,” Hurd says.

Hurd considers projects like this good news for Ontario’s economy. “Anytime there’s a substantial amount of work in a given area it supports local economies in addition to the provincial GDP.”

With population growth projected to continue across southern Ontario, Hurd also pointed to ongoing work to widen Highway 401 and improve Highway 7 between Guelph and Kitchener, coupled with work on rail and other public transit systems, as vital to supporting trade and other economic activity.