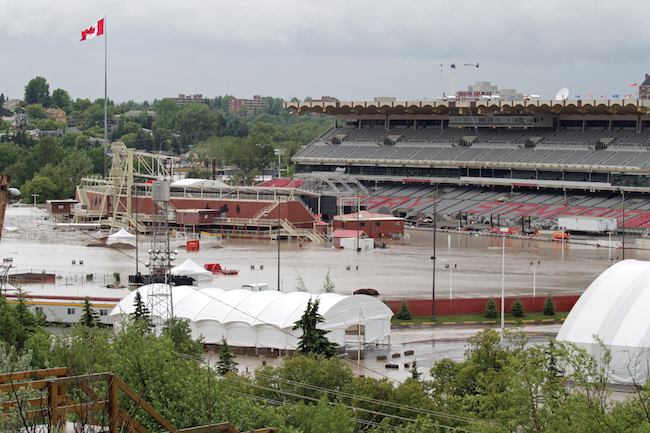 When it rains in Canada these days, it pours. Just six years ago, torrential rains dumped multiple summers worth of rain on parts of southern Alberta in just 48 hours. Mudslides closed sections of the Trans-Canada Highway and damage to homes and other structures exceeded $6 billion. Last year in Vancouver, flash flooding swamped a rapid transit tunnel as well as roads and highways. This past spring it was eastern Canada’s turn. Heavy rain and melting snow in New Brunswick overwhelmed some 100 roads, including the Trans-Canada, while more than 5,000 homes in Quebec were underwater or completely surrounded. Flooded pathways close to Canada’s Parliament buildings struck close to home for politicians. Ottawa Mayor Jim Watson declared a state of emergency as hundreds of soldiers sandbagged a cresting Ottawa River even as it rapidly filled low-lying dwellings in the Canadian capital.

Government response, while sometimes critiqued as insufficient, has hardly been made up of chump change. This spring’s floods in Fredericton marked the city’s third major flood in 11 years and the Liberals announced $11.4 million in August to beef up protection and maintain essential services there should circumstances repeat.

“People have seen first-hand the damage and uncertainty caused by extreme weather events,” Prime Minister Justin Trudeau said. In this case, the money came from the $2 billion Disaster Mitigation and Adaptation Fund (DMAF), one of several federal funds, reflecting various levels of need and intent, available to help municipalities address flooding and other climate resiliency and disaster mitigation pressures.

“Since November 2015, federal funding totalling more than $4.4 billion has been invested in 2,882 stormwater, wastewater, drinking water and disaster mitigation projects across Canada,” says Sabrine Barakat, a spokesperson for Infrastructure Canada. In an e-mailed response to questions, Barakat says the DMAF accounts for more than $1.5 billion of the federal investment and has helped finance 48 projects.

Separately, the New Building Canada Fund has provided nearly $118 million towards 41 disaster mitigation projects and municipalities can use federal Gas Tax Fund (GTF) dollars for similar works. “The GTF makes more than $2 billion a year available to more than 3,600 communities across the country who use this fund to develop approximately 4,000 projects per year,” Barakat says. “To empower municipalities to invest in their local infrastructure priorities, Budget 2019 includes a one-time top-up of $2.2 billion to the federal Gas Tax Fund.”

While the federal government contributes towards these infrastructure projects, governments take a cost-sharing approach, with provinces, territories and municipalities also contributing but with planning and design generally occurring locally and filtering towards higher orders of government through grant application processes. A list of projects Infrastructure Canada has helped finance shows the breadth of flood-related efforts underway across the country, including natural protections and the replacement of underground water pipes in Yellowknife, the rehabilitation of riverbanks and drainage systems and construction of water storage facilities in Kelowna, B.C., new storage and conveyance infrastructure in Saskatoon, and water treatment and sewer works in St. John’s. 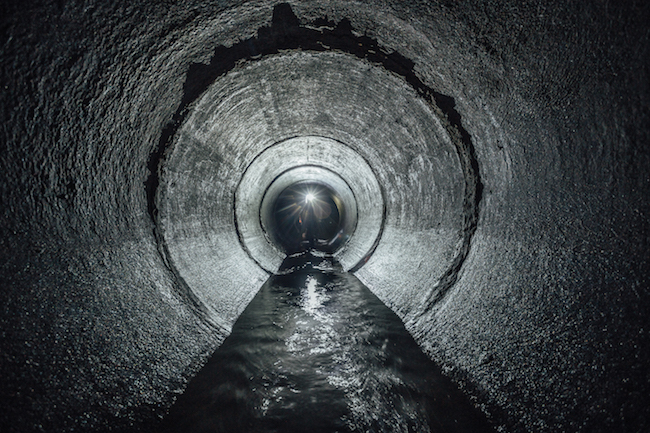 Toronto hasn’t endured the kind of widespread, overwhelming flooding that has resulted in large-scale evacuations, but Canada’s most populated city has experienced localized strikes with some pretty perilous consequences. In August 2018, a sudden, unexpected downpour in the downtown business core left two men trapped in an office elevator watching the water rise around them before they were rescued. Floodwaters have created massive sinkholes on major thoroughfares, damaged trunk sewers, inundated countless basements and overwhelmed combined storm-sanitary sewers to send raw sewage flowing into nearby waterways. In 2003, after considerable planning, the city launched what’s arguably the country’s biggest water-related remediation effort yet, a 25-year Wet Weather Flow Master Plan (WWFMP) designed to curb flooding, tackle polluting overflows and protect the city’s natural features.

Combined sewers exist mostly in the downtown core and date back to the mid-1800s, when sewage was dispatched in open ditches and immediate action was needed to halt a lethal cholera outbreak. While the WWFMP doesn’t call for system-wide separation, some separation will occur on an opportunistic basis — for instance, where road or sewer works are already underway. Toronto Water general manager Lou Di Gironimo says separation is expensive, adding that flooding can be curtailed by managing stormwater on-site and preventing the overwhelming of infrastructure.

The plan instead takes a watershed approach, with at-source measures such as rooftop downspout disconnections and permeable surfaces, followed by conveyance measures such as sewer fixes, streambank repairs and new storage tunnels, as well as end-of-pipe solutions such as treatment plant and stormwater pond upgrades. “We recognize the need to manage stormwater from two aspects — quantity that falls at one time as well as quality… before we release it back to the environment,” Di Gironimo explains.

Some of the work is projected to extend through 2038, about a decade longer than initially forecast, due to the size and scale of these projects. However, more than $1 billion has been spent thus far, with some components completed or well underway. The city phased in downspout disconnections and addressed other low-cost policy pieces early on. Large stormwater management ponds near the mouth of the Humber River and further north in Earl Bales Park are now online, trapping polluted stormwater for absorption by aquatic vegetation. Crews have also used timber logs, bioengineered cribs and, where water flows swiftly, large limestone slabs to stabilize creek banks and stimulate new, protective growth. 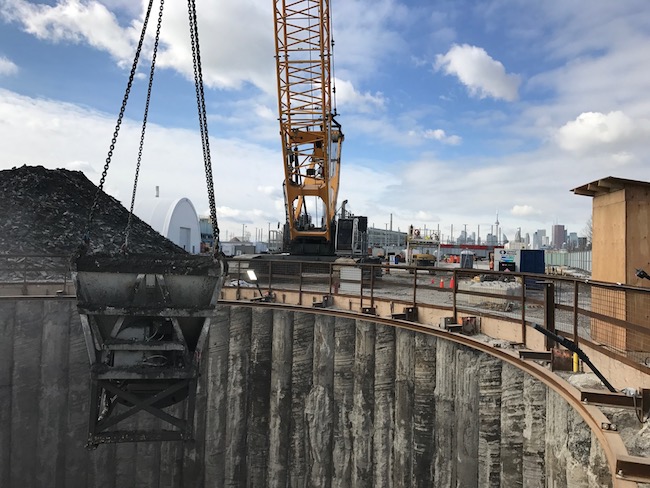 At the Toronto’s Ashbridges Bay Treatment Plant, crews excavate a shaft for the 10.6-kilometre Coxwell Bypass Tunnel. The tunnel is part of the overall Don River and Central Waterfront project. PHOTO: City of Toronto

These measures are just the start. Plans for more than $2 billion worth of work on the Don River and Central Waterfront project are particularly ambitious, with construction already underway on an 11-kilometre tunnel, six metres in diameter, running along the Don River down towards the Ashbridges Bay Treatment Plant.

“That’s the first phase and there’s other phases to be built over time,” Di Gironimo says, describing plans to refurbish the plant and add a natural land mass to offer additional protection. Also on tap are constructed wetlands in the Don Valley, stormwater outflows along the city’s western waterfront in Etobicoke, and a stormwater treatment facility at the mouth of the Humber. “Once we’re all done, it will probably be about $2.5 to $3 billion to do all of the work that’s under the Wet Weather Flow Master Plan, including basement flooding [prevention].”

Certainly, with the breadth of projects underway and planned, there’s plenty of opportunities for a variety of contractors. In Toronto’s case, Di Gironimo says ongoing basement flooding prevention spells considerable remaining work, from tunnels, shafts and treatment facilities along the harbour, to pipes and other engineering improvements across the city. These include a $100-million sewer project in midtown and a $220-million tunnel project in the old City of York. “They’re being designed right now and will be tendered within a year or two,” Di Gironimo says.

With Canadian municipalities bracing not only for increasingly intense storms but in some cases for projected rapid population growth, Di Gironimo has no shortage of advice.

While flooding of basements and roads might seem like separate problems, they’re largely related. “If you design roadways properly, with appropriate curb design, roadways are actually supposed to act as temporary storage,” Di Gironimo says, emphasizing that roads engineered to accommodate small volumes of water without disrupting pedestrians or vehicles reduce the potential it will gather where it can cause greater harm. “A lot of our subdivisions are not near creeks and rivers, nor were they designed to channel into a creek or river. That’s why you see basement flooding in certain parts of the city.”
Ultimately, city staff need to know their infrastructure inside-out. “Complete the engineering assessments to see how your system is performing and identify any design challenges,” Di Gironimo recommends.

This article first appeared in the October 2019 edition of On-Site. Click here to read through the entire issue.