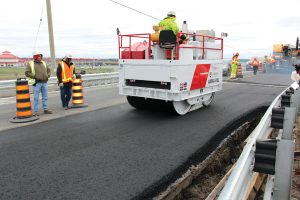 The Ontario Ministry of Transportation (MTO) is wrapping up a research study that began two years ago to test the performance of a cutting-edge asphalt compactor called the Asphalt Multi-Integrated Roller (AMIR). AMIR is the brainchild of Abd El Halim, a professor of civil and environmental engineering at Carleton University in Ottawa, who says his nine-tonne invention will improve the longevity and resilience of pavement.

“The study included a comparison with conventional compaction technology, field and laboratory testing, results evaluation and reporting and a final presentation to the MTO technical staff,” adds Pinder, noting a “final report is expected soon. In the meantime, next steps are being considered.”

If all goes well, those next steps might involve the Ministry using AMIR compactors to pave MTO roads across the province.

The Ministry of Transportation is “very interested in the potential of this unique Canadian technology to improve the performance and longevity of asphalt pavements, ultimately reducing maintenance and construction costs for MTO and the taxpayers of Ontario. In general, if an asphalt pavement could last even one year longer, that would translate into an average savings of around $50 million per year for MTO provincially,” states Pinder.

Halim is also the director of Carleton University’s Centre for Advanced Asphalt Research and Technology (CAART), which studies ways to improve pavement. He conceived the idea for AMIR back in 1982, while in graduate school at the University of Waterloo.

“I was developing the technology of ‘Polymer Grid Reinforced Asphalt pavements’ with the objective of preventing surface cracking, which can appear less than two years after construction. However, as I was completing my PhD on the topic, I discovered the main cause of the surface cracks … these very fine surface cracks were created by steel drum-rollers, vibratory, static or oscillating rollers. It is assumed that pneumatic rollers heal those cracks, which our research since the ‘80’s [has shown to be incorrect],” says Halim.

“These findings led me to develop a new theory, which explains how the cracks occur and how we can prevent them. The result was the inception of the AMIR idea, in which steel drums are replaced with a track made of a specially designed rubber belt. No vibrations or oscillations are needed. The AMIR compactor … completes the compaction of the asphalt in fewer passes [than a traditional compactor]. The AMIR compactor provides highway engineers and designers with [pavement] that lasts longer with less maintenance and repairs,” he adds.

Halim says surface cracking of pavement due to rollers is a global problem that results in increased costs for road construction and maintenance.

A full-scale prototype of AMIR was put together in the early 1990s by Lovat Inc., a Canadian manufacturer of tunnel-boring machines later acquired by Caterpillar Inc. An Australian version, dubbed HIPAC, was produced in the late 1990s.

The Canadian AMIR project went dormant, due to lack of funds, until 2012 when the Ontario Ministry of Transportation took an interest in the machine. What followed next was an agreement between MTO, Carleton University and R.W. Tomlinson Limited, the Ottawa-based transportation infrastructure firm, to upgrade the Canadian prototype. MTO entered into a research project with Carleton University in October, 2014 to test the upgraded AMIR (officially dubbed “AMIR II”) under real-world conditions. Among other tests, the AMIR was tried out on a cold day in late November, 2014 on Highway 34.

“The Highway 34 project went well. On that project, the AMIR compacted a single 80-mm lift of Superpave 12.5FC2, to 92.6 per cent compaction, meeting MTO specifications with a uniform, tight surface texture, having a permeability three times less than the conventionally compacted surface paved on the bridge. This was also achieved during cold conditions (-3°C) when paving would not normally take place,” reports Pinder.

“The AMIR technology promises several benefits, but from a [highway management] perspective, the most notable would be the lower permeability asphalt surface that the AMIR produces. In simple terms, asphalt pavements deteriorate over time due to damage caused by the ingress of water and freeze-thaw effects. If the permeability of the pavement is lower, the damaging effects of water will be reduced and the pavements will last longer,” continues Pinder.

Halim has been working with R.W. Tomlinson on a commercial prototype called AMIR X, scheduled to be unveiled later this month.

Halim cites several reasons why contractors would be wise to acquire an AMIR compactor: “One, if you use an AMIR unit to replace three different conventional rollers, there are savings in capital investment, operation costs, and overhead of the equipment. Two, AMIR does the job right in less time and fewer passes and provides a finished asphalt that meets the MTO specs and sometimes exceeds them. And three, it will give you an edge in competition when you bid against other contractors using conventional compaction equipment when the contractor is required to guarantee the end product for several years as many contracts require today.”

For now, those involved with the AMIR project await MTO’s final report on the machine’s performance. Depending on its conclusion, the report might portend a bright future for the advanced asphalt compactor, and the province’s highways.