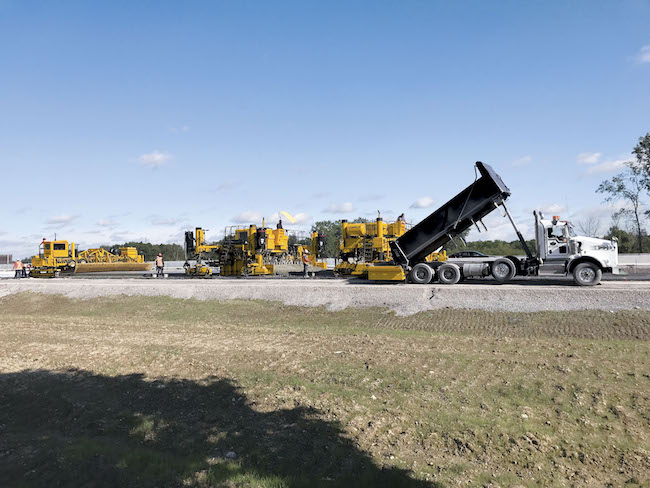 With Canadian contractors prepping for the spring construction season, the top concrete paving equipment manufacturers break down the latest tools crews could have at their disposal. More automation, telematics and emissions controls are all available as OEMS build in new enhancements.

Working to keep its pavers and control systems cutting-edge, Gomaco has stayed focused on adapting its G+ digital control system in recent years, building on the platform first introduced in 2011 while keeping it easy to understand and operate.

“G+ has grown from there and continues to change and improve with each new version released,” he says. “We’ve expanded on all of those initial features of the G+ and continued to improve them.”

On the automation front, for instance, leg positioning with rotary-sensored slew drives on Gomaco four-track pavers send G+ information on the pivot arm position and work together with the track rotation sensors to maintain tracks in the straight-ahead steering line.

“It also allows the tracks to steer farther than ever before and easily turn radii,” Klein says.

“The Navigator touchscreen can be mounted anywhere on the paver and allows ground personnel the ability to fine-tune the paver’s performance and configure settings for the GSI, SBI, TBI, and PTA onboard the paver,” Klein says, adding that the onboard GSI, reads the smoothness profile of the new pavement using either a real-time localized roughness graph or a simulated California profilograph.

Gomaco Remote Diagnostics, or GRD, covers the telematics on the company’s pavers. The platform gives contractors real-time analysis of their ride quality, letting them monitor the paver’s smoothness on their phone or laptop.

“With [GRD], we can take a contractor request who is paving in Belgium, write the software in-house here in Ida Grove, Iowa, and send that program or update to the machine on-site in Belgium. Or Canada. Or Texas. Anywhere in the world,” Klein says. 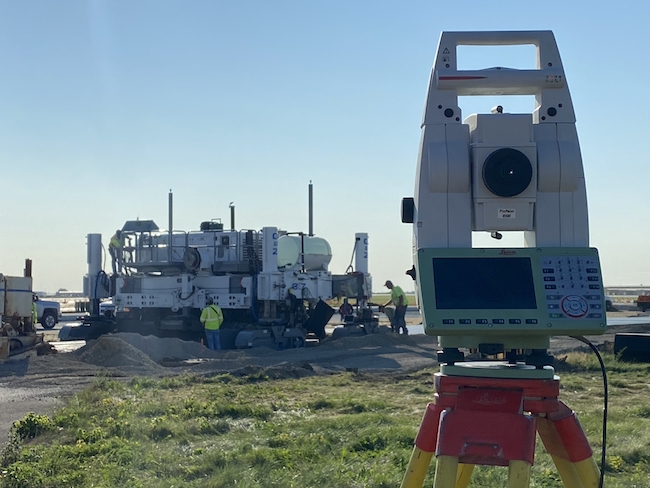 “For the last two years our focus has been on upgrading all G&Z product line power units to Tier 4 Final engines due to the EPA emission standards regulations,” she says. “Multiple factors such as fuel efficiency, quality, and a reliable dealer network made us switch to the Cat engines of different capacity across all models.”

In addition, the electrical and hydraulic filtration systems on G&Z pavers’ power units have been re-designed for ease of access, monitoring, troubleshooting and service, as well as to keep vibration isolated from the centre tractor module to improve component life and reduce noise.

To help contractors keep as productive as possible and stay competitive by offering an aggressive paving schedule when bidding jobs, G&Z has set out to streamline the width change process, which is traditionally a time-consuming endeavour. Telescopic Paving Kit End Sections, or simply TeleEnds, let crews perform width changes in less than two hours without needing to remove the paving kit, Ismaylova says. Unlike past solutions, which typically forced contractors to sacrifice smoothness for a speedier width change, the new innovation has no adverse effects on pavement smoothness.

On the software side, G&Z has developed NoLine Software for its pavers capable of directly interfacing with third-party stringless offerings from Leica, Topcon and Trimble, saving contractors time on time on surveying, stake driving, string set-up, among other advantages.

“Very often, our service team will know about an issue, failure or an impending problem in the equipment system before it comes to the attention of the operator on-site,” Ismaylova says. “If a problem does arise, our technicians look at the transmitted information and advise the crew on site what the trouble is, where it is located and how they can fix it.”

A new control system from Power Curbers & Power Pavers, is taking the company’s machines to the next level. Fred Bryan, vice-president of Sales for Power Curbers Companies, says the SlipSmart Control Solution has improved all aspects of slope controls, including draft and cross-slope. 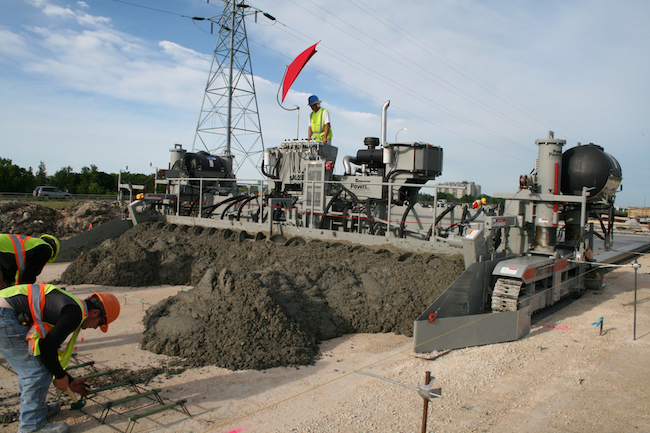 “We’ve also enhanced our machinery’s positioning valves with more refined movements to complement slope control advances,” he says. “These changes give the operator more precise, smooth control of the machine, which results in a higher-quality slipformed product.”

Along with integrating seamlessly with 3D or stringless guidance systems from Leica, Topcon and Trimble, Power Curbers has added a range of automated features to its slipformers aimed at simplifying the operator’s job. As a few examples, Bryan points to the electric rather than hydraulic vibrator control system, an automatic steering compensation system and smart vibration controls that let the operator monitor and set the target frequency of individual vibrators that the system will automatically increase or decrease hydraulic flow to maintain. On its four-track pavers, the company also offers a steering mode selector that operates independently of stringless, stringline, or manual guidance, letting crews easily switch between front-steer or all-crawler paving, transport mode, 360-degree spin and crab crawl, among others.

On the telematics front, Power Curbers has a number of units currently in the field helping contractors with asset management and remote diagnostics.

“We recognize the value in telematics solutions and will apply them wherever we can to aid operators, increase uptime, and provide utility to our customers,” Bryan says. “We believe developing our telematics solution will further these goals by simplifying troubleshooting with remote diagnostics, increasing uptime with predictive maintenance, and adding utility through machine locating and asset management.”

Productivity and precision have driven the design philosophy at Wirtgen from day-one, Tim Nash, director of Concrete Products for Wirtgen America says, adding that an ethos of continual improvement extends from the hardware to the rideability to the control system of its slipform pavers.

Unsurprisingly, applying automation technology is one area of focus for the equipment maker in 2021 and beyond. 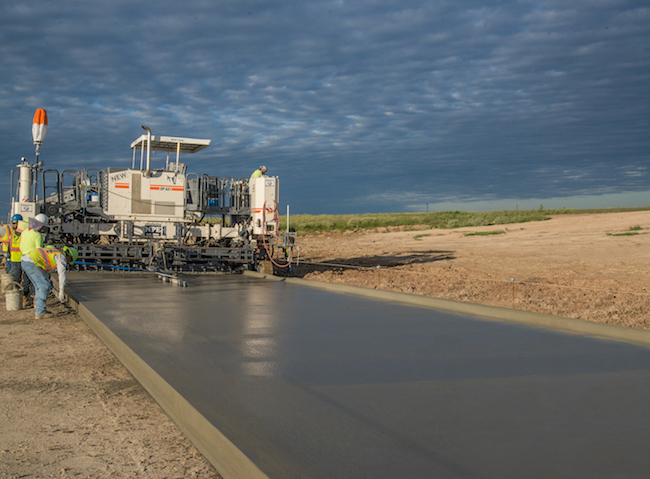 Mobility features, on-site and job-to-job, are improving uptime and simplifying maneuverability, Nash says. Hydraulic leg swing, 90-degree track turn and push-button counter rotation are a few examples of the technology available on Wirtgen pavers. They are far from the only ones.

“When looking to the paving operation itself, the diverter plow in place of traditional augers has been a step in the right direction,” Nash says. “[It] not only gives operators quick and efficient control of material spreading with joystick control but this system can also be programmed for automated concrete spreading.”

Among other popular features, Nash pointed to the exclusive automatic rear lift feature, which mitigates stop/start roughness when concrete supply is insufficient resulting in smoother pavements and less hand work behind the paver, as being a favourite for finishing crews.

On the sustainability side, Wirtgen offers Eco Drive on all its pavers. A computerized engine control, the system automatically controls engine RPM based on the functions that are engaged at any given time, saving on fuel consumption.

“This saves the operator from manually having to raise/lower which in actual practice doesn’t get done often – operators typically leave the engine at 2100 RPM all day long despite periods of inactivity,” Nash says.

WITOS, the firm’s proprietary telematics system has been standard on all Wirtgen pavers since 2016. It collects a huge range of data, from location and fuel consumption to production hours versus total engine hours. WITOS also lets operators create geo-fences and will bring more metrics tied to project scope as telematics technology and interfaces continue developing, Nash said.

With the overall aim of putting more precise and productive equipment in the hands of customers, Allen Engineering has introduced a new enhancement to its bridge deck finishers (BDFs). The patent pending feature fine-tunes how the machine advances and enables an easier movement transition for the paving carriage.

In essence, a BDF advances when the carriage moves to the end of its cycle and momentarily stops, Mark Conte, the sales director for Paving Equipment Products at Allen, says. While in the past, an operator had to increase the carriage speed to advance the machine travel, the latest upgrade has separated these functions.

“Similar to slipform paving, you never want that carriage to stop moving,” Conte says, adding that this is complicated by ready-mix deliveries, which as concrete crews all know, rarely play out as planned. With the functions separated, operators are able to get the desired finish, as well as match progress on-site to ready-mix delivery. Allen integrated the enhancement while making no changes to the operator’s console.

As the name implies, the majority of these applications are bridge decks, but the company’s BDFs are also put to use on road and airport paving projects. Allen continues to work on a range of other innovations to add to its product lines.