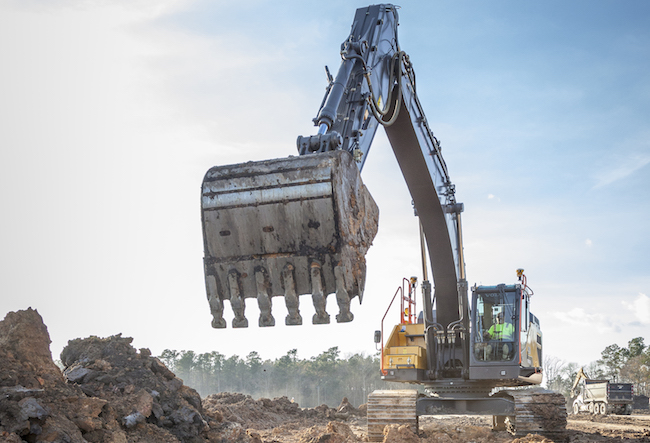 Before an armoury of fully autonomous equipment can work alongside crews, machine control developers at the helm admit there will be a few hurdles to jump. Though it may be tempting to take the leap, the unpredictability of autonomous equipment on high-risk construction sites has prompted key players in the space to take pause.

“Everybody is exploring autonomy, in general, and so are we,” Kris Maas, director of Machine Control Product Management at Topcon Positioning Systems Inc., says. “Do we think the market is ready for it? I don’t think so… The safety aspect, for me, is crucial before you go to full autonomy. Every job site is unique and extremely complex, unlike typical manufacturing processes or agricultural applications that are often repetitive, and occur in a more controlled environment.”

He isn’t alone. Kyle Birch, Machine Control manager for Canada at Leica Geosystems, says it’s a question of when autonomy “makes sense” for the construction industry.

“Certainly, the technology exists to do autonomous machines, but construction sites are too uncontrolled at this point to run machines autonomously,” he says. “There’s too many men on the ground that can be in harm’s way.”

Still, developers are testing the waters. Eric Crim, product manager of Machine Control Systems at Trimble’s Civil Engineering and Construction Division, says the company has set out its roadmap to autonomy. Similarly, at Topcon, testing is underway on autonomous machines – and the technology is ready to go to market, though Maas says it won’t be unveiled in the near future.

“I definitely see that there may be autonomous machines on a construction site one day, but there’s going to be steps along the way,” Crim says. “If you take a look at the car industry and what they’ve done in autonomy, it didn’t start off with the first autonomous car 10 years ago. There’s things like cruise control, anti-lock brakes, all those steps along the way that help take the strain off an operator – these are the things that we’re looking at in machine control. Are there ways that we can actually steer the machines? Are there ways that we can actually help guide the operator to do the work that they’re doing for the day without having them to think about it?”

For Maas, self-learning could serve as a step between automation and full autonomy, enabling the autonomous equipment to interact more safely alongside workers and other machines.

“It’s easy to get machine control autonomous. We could do it today,” he says. “How do we make our machines self-learning so they understand what’s going on and they can interact with what’s happening on a job site? That’s something we’re investing a lot in.”

In the last five years, machine control automation has become more “realized” on job sites, opening the industry up to the technology’s potential for operators and equipment, Crim says.

“Automation plays a big role in our long term roadmap,” he adds. “Machine control has just highlighted the fact that you could automate some of these tools and processes on a job site. But now its’ actually taking a look at what can we do further than just machine control.”

Birch echoes Crim, adding that the industry should expect to see “more and more automation” in the future. Along with enhanced productivity and accuracy, leveraging automation could alleviate the skills gap on job sites.

“You hear the complaint that they can’t find the skilled operators that they had in the past. It’s hard for contractors to keep staff,” he adds. “Nothing can cover up for an incompetent operator but you can make a good operator great with automatics.”

In the last few years, the release of automatic excavator solutions has marked a major advancement in machine control, offering added productivity and functionality to the key piece of construction equipment.

“Now that the excavators automated, that means everything is fully automated,” Birch says. Developers are still eyeing a few other key trends, such as data sharing across construction sites, before jumping ahead to full autonomy.

“The whole autonomy thing, its definitely a buzzword. Its one of those things everybody is interested in,” Crim says. “Everybody realizes it’s going to be hard to take the person out of the machine, for safety reasons. But we’re pretty excited about the steps we have laid out internally on how we’re going to get there. And I think the contractors are pretty excited about this.”

Here’s a breakdown of what the big tech providers are offering: 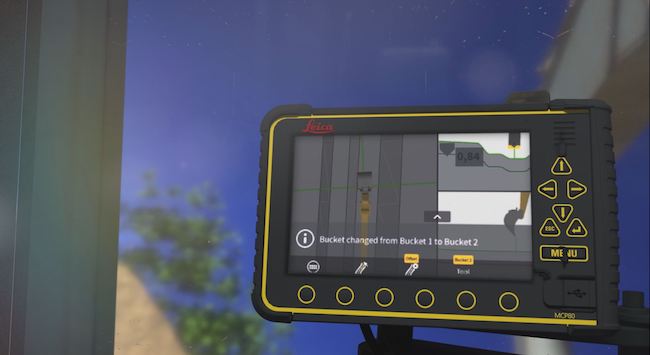 Comparing the design model to the actual position of the machine’s cutting edge, such as the bucket or blade edge, Leica’s MC1 software assists the operator to position the machine to achieve the planned design. PHOTO: Leica

Taking its machine control portfolio a step further, Leica unveiled the MC1 software for excavators and the latest iteration of its ConX web interface in April.

ConX, released just two years ago, facilitates data sharing across construction sites, “bringing operators, foreman and project owners together in one digital platform,” the company stated in a release.

“Almost all our customers are running ConX,” Birch says. “You’re able to push and pull data from the machines in real time, get as-built data out of machines, change designs – that’s been a big thing.”

Now, the tool enables creation of a 3D environment from data aggregation. It uses sensor merging to provide data with automated analyses and visualisation of aspects of a project, such as cut and fill volumes.

“Even small contractors can now get their data provider set up to access the machines, so it can make the transfer to the machines seamless,” Birch says. “It’s been huge for us for remote support… because, through ConX, things can either be diagnosed and solved remotely or they can be diagnosed and when the technician gets out to the field, he knows exactly what he has to do.”

“When you’re changing buckets with an excavator, the system knows it changed the buckets, so it will adjust your measurements accordingly,” Birch adds. “Previously, the operator would have to go in and manually select a new bucket. Now we’ve automated that function.” 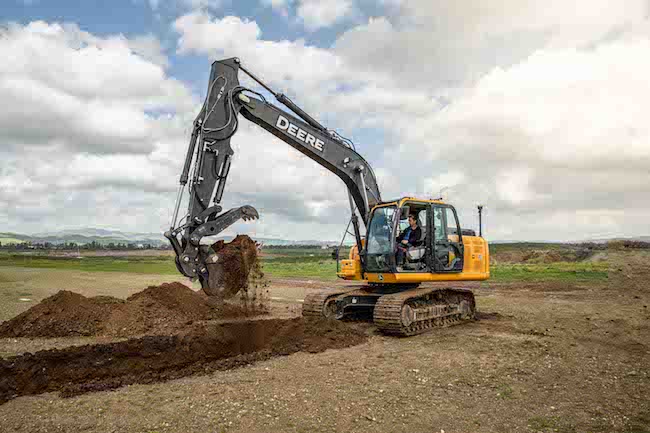 The latest update to the IMU-based, mastless 3D-MC Max system was introduced in April. PHOTO: Topcon

The mastless system, released in 2016 with support for six-way dozers, now offers support for the four-way pusher class of dozers. It also now includes blade wear management and an optional third IMU, which is designed to improve performance on steep inclines.

“20 years ago, 3D automatic control was not even available,” Maas says. “If you look at how the market has grown and how machine control is being accepted as a productivity tool on the job site, it has tremendously changed. People are using machine control to their benefit and they understand the benefit.”

Topcon has also unveiled an automatic edition of its 3D modular aftermarket solution for excavation: the X-53x. The system uses the same components of the original X-53 system with the addition of hydraulic, automated control. With fingertip operation, the automatic excavation solution is designed to provide automated depth control in order to reduce operator fatigue.

“When you look at automation and autonomy, you have to be careful that you don’t go too fast because the market is not ready to accept technology as a given for them to implement on their machines or their process,” Maas says. “Now the market is ready for it. You see OEMs coming out with automatic excavators… that will improve the way you work with an excavator.” 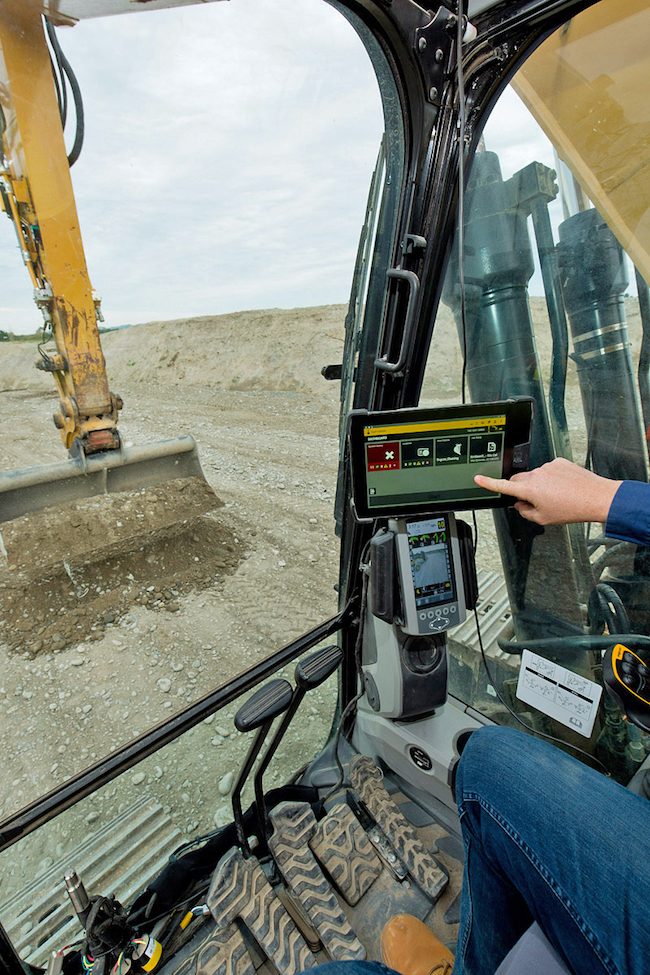 Trimble is currently working to scope out the next five to 10 years, using its Earthworks platform as a foundation. PHOTO: Trimble

“It was a rearchitecture of what we did with machine control,” Crim says. “With this change, we’ve actually broken out the intelligence of the system. We’ve created what we call an EC, or an electronic control unit, that we put inside the machine and we let the display to just be the graphics only.”

By automating excavator operation, Earthworks aims to allow the operator to achieve grade consistently and accurately in less time. The variation for dozers mounts dual Global Navigation Satellite System (GNSS) receivers on top of the cab to eliminate masts and cables traditionally located on the blade. The change is designed to save contractors’ time and keep receivers safe.

Now, Crim says the company is scoping out the next five to 10 years, setting a foundation through Earthworks.

“The new system is pretty advanced… It has capabilities today that we might not be using but we may be using in the future,” he says. “It was a big overhaul for us. It wasn’t just taking the same old system and just changing the user interface. There was a lot of underlying engineering work that we did to make sure this could happen.”