Operating at a distance

Remotely operated equipment is expected to ease the worker shortage while improving safety, job quality, and efficiency on construction sites. It will also be an important step towards autonomous operation. 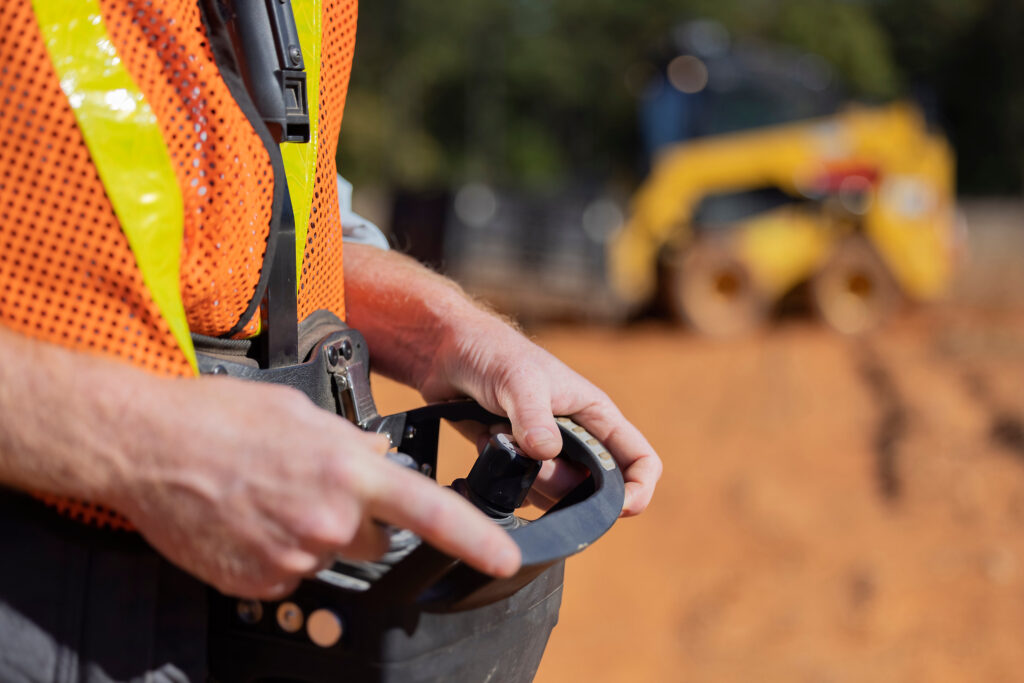 Remotely operated equipment is expected to ease the worker shortage while improving safety, job quality, and efficiency on construction sites. It will also be an important step towards autonomous operation.

First page web search results for remote-control construction equipment are mostly about toys. As we’ve seen with radio-controlled airplanes, racing cars, boats, and drones, operating a scaled-down dozer or excavator has immediate appeal for hobbyists, and sales appear to be brisk.

On real-life construction sites, however, remote control operation, also known as supervised autonomy, isn’t as easy as these simulations suggest. While there have been several recent examples of far-away loaders and excavators controlled from trade show booths, there are hurdles that make wide adoption several years away.

“Many of the prerequisites for this are already in place — the technology maturity and so on,” says Christian Spjutare, advanced engineering program manager at Volvo Construction Equipment AB. “The main challenge related to adoption is scaling the technology to be competitive not only in special use cases, but in more general mainstream applications.”

Many hope the technology will help ease the perennial shortage of skilled workers and support the existing workforce by eliminating hazards, reducing physical stress and strain for operators, and making heavy equipment operation more appealing for younger workers.

Much of the technology is seeing wide use in mining, where work sites are static in comparison with construction, making them easier to automate. In construction, use cases for remote control on large machines like excavators, dozers and trucks tend to be industrial-type operations where the equipment remains static over an extended period. These include remote timber handling sites, concrete batch plants, aggregate production, or decon­struction of old mine sites.

A key barrier to broader deployment in construction is the cost and effort of setting up jobsite control networks.

“There’s a mesh network that’s required to be set up in order to utilize this technology, and that’s not easy to do,” says Troppman. “When a contractor has a dynamic workflow where the equipment moves on every few days, that contractor is not likely to use supervised autonomy right now.”

Remote technology for heavy equipment can be deployed at several levels, each progressively more difficult to implement. A machine might be controlled from a handheld device a few feet away, from a control shack on the site, or from a control room many kilometres away.

“We distinguish between two types of remote control,” says Spjutare. “One is the traditional remote control, where you can see the machine and control it from a handheld device. We have solutions in that area, but what we’re working on mainly right now is tele-operations, where the operator is at a distant location.”

The advantages of tele-operations include all the safety benefits of on-site remote control, plus better utilization of both equipment and operators. By dividing the work between operators in different time zones, it’s easier to keep an operation going for extended hours. As well, contractors can avoid the perennial problem of having to move operators to where the work is and can deploy their best operators in situations where they are needed the most.

“Operating at a distance avoids the cost of transporting people,” says Alan Pumklin, a market professional at Caterpillar, “and it also makes it easier to attract and retain the best talent, because they’re not having to leave their families.”

Another important aspect of remote control is that it is seen as a step, both by vendors and adopters, towards completely autonomous operation where no operator is required. A strong precedent already exists in mining.

“There’s a lot of autonomy in mining, particularly in ultra class haul trucks at various deployments around the world,” says Troppman. “The oil sands in Fort McMurray have a large number, and we’re starting to see that technology in construction. That pathway will be built upon supervised autonomy where there will be an operator.”

“I think the real power of this technology comes into play when we start seeing this as an enabler for autonomous operation,” says Spjutare. “A system can do the bulk of the repetitive work autonomously, but you can get support from an operator when you need to move into some sort of complex motion. And then, over time, as the autonomous system gets more advanced, you can phase out the tele-operation and have a completely autonomous system.”

Remote control is not just about heavy equipment. Husqvarna Construction has introduced remote control in machines such as trench rollers, wall saws, floor grinders, and demolition robots. “Remote control is becoming more prevalent in a lot of our machines,” says Mark Michaels, senior director of product market management at Husqvarna. “Some of our tools have gone to 100 per cent remote control, and we expect many of them to become completely autonomous.”

As with larger machines, the most popular advantage is protecting workers from unexpected hazards, repetitive stress, vibration, noise, and dust. “The most applicable situations are situations where it’s desirable to get the operator further from the machine,” says Michaels.

CHANGING THE NATURE OF THE WORK

As the industry has seen with recent innovations such as GPS and mobile apps, the key to adoption will be absorbing changes to existing work processes.

“The most difficult challenge of this technology isn’t necessarily the technology itself; it’s the change management, where we take the technology and incorporate that into specific work processes,” says Pumklin.

One of the keys is helping workers develop confidence that the technology won’t make them less productive.

“We’ve found that the most experienced operators are the ones you need to convince first,” says Michaels. “They might be more resistant to the technology because they are so used to feeling their work. They can feel their productivity through the noise that the machine or the tool makes, or through the amount of vibration. It might even be sense of smell, for example, when they hit a reinforcement bar, or they’re not using enough water. So, they’re afraid that if they lose all that, they won’t be as productive. Especially when they’re on a learning curve and a little awkward with the controls.”

The adjustment, however, is generally successful. Workers find that feedback signals, such as sound, are different, but they get used to them. Additionally, being a few feet away from the equipment can provide a “big picture” view of the work.

“Our experience is that once operators get used to remote, they say they would not go back to manual operation,” says Michaels.

When operating large machines at a distance, the adjustment factors are different, but the transition is similar.

“We get a lot of feedback from operators, and the first thing they say they miss is the sound of the machine,” says Spjutare. “But when they’ve tried this for a number of days, generally sound is not a problem. What’s more important is sensing distance; how far they are from an object.”

“These operators go from a 3-D to a 2-D world, and that’s challenging,” says Pumklin. “There is a transition period. But overwhelmingly, operators around the world that have been using this have been successful.”

Another aspect operators miss is the feeling of motion. Volvo and other vendors use remote operator seats that provide motion feedback, much like the flight simulators used to train commercial pilots but, says Spjutare, operators often say they no longer need that after an adjustment period.

As in other areas of automation, rapid technology improvements are narrowing the gap between remote control and manual operation, improving operator comfort with the technology and expanding the range of tasks where the technology can be applied.

“When you’re operating a machine remotely, you lose a lot of sensory input,” says Spjutare, “so we need to work on introducing different diagnostics or systems where we can compensate for that.”

The consumerization of remote control, as we’ve seen with drones, is driving rapid improvements in the user experience.

Improving wireless communications to reduce latency and improve resolution is another top priority.

“At Caterpillar, we’ve done a lot of research and development on optimizing bandwidth,” says Pumklin, “so that we can pack video and sound machine control information into a single stream back to the operator who might be on site, or in a different country.”

The technology is expected to evolve rapidly over the next few years thanks to parallel developments in manufacturing, mining, and agriculture.

“It’s a growing segment for us, and it’s getting more and more popular,” says Michaels, “and we believe that as it gets more exposure, it’s going to create an even bigger demand.”