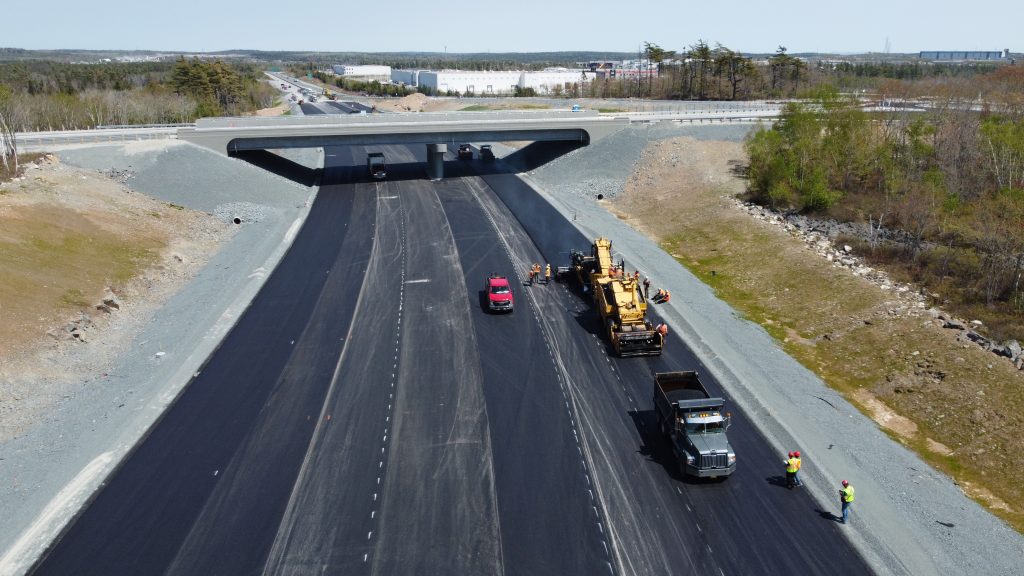 Keeping natural but acidic leachate from shale rock at bay, protecting migrating animals and fish, and scouring marshlands and fields for unexploded ordnances — that’s all in a day’s work for crews engaged in an extensive program to upgrade 100-series highways across Nova Scotia.

The stretch of Highway 104 between Sutherlands River and Antigonish illustrates the motivation behind more than $1 billion of lane twinning projects and other major enhancements that are in the works province wide.

A head-on collision between a car and a transport truck in 2019 killed two women, bringing to 21 the number of fatalities recorded in a single decade along the 38-kilometre stretch of single-lane highway. That prompted a cry of exasperation from local first responders. “We see more than our share of it…and it’s traumatic,” Barney’s River volunteer fire chief Joe MacDonald told news reporters at the time.

With comparable experiences backed by data along multiple sections of 100-series highways, particularly in rapidly growing regions, the province was already well into planning a number of projects it would embed into its annual roadworks regimen.

Among the first to receive the green light was Highway 102. In 2019, crews began work on a new $30 million interchange and connector road in Lantz, north of Halifax, and the new $20 million Aerotech connector road further to the south, in Wellington.

Around the same time, work also got underway on two stretches of Highway 103. With a 2015 safety review correlating high traffic volumes to a rising number of fatal collisions, the province budgeted $140 million to twin 22 kilometres from Upper Tantallon to Hubbards, west of Halifax, and build barriers and medians to separate opposing traffic.

The province also allocated $51 million for an interchange to connect Highway 103 with the Town of Bridgewater and its expanding business park. The plan was to build modern roundabouts, improve intersections and add auxiliary lanes to ease traffic flow.

Steadily increasing traffic congestion has also led to $210 million in connectivity enhancements on Highway 107 between Sackville and the Halifax suburbs of Bedford and Burnside. Provincial studies noted more than 40,000 vehicles daily, with kilometres-long traffic queues along Magazine Hill and Bedford Bypass, the only direct links between these communities.

Measures include a nine-kilometre controlled access four-lane freeway with a 1.2-kilometre arterial connector, roundabouts, and new split and full-diamond interchanges.

On Highway 101, a $151-million twinning project from Three Mile Plains to Falmouth, near Windsor, has broken ground, though work on a section passing through the Avon River area is waiting on a federal government approval of fish protection measures.

More recently, crews began work last year to convert a rotary intersection on Highway 104 at Port Hastings in Cape Breton to a more modern roundabout to ease traffic flow, reduce speeds and improve safety, while a new lane approaching the Canso Causeway is meant to manage queues that form when a swing bridge opens. The project is expected to cost $5 million.

A STRETCH OF P3

Although the projects are all independent of each other, the twinning and four-lane improvements to Highway 104 from Sutherlands River to Antigonish, including the aforementioned stretch that has long beleaguered first responders from Barney’s River, is a bit of a signature piece for the province.

While Nova Scotia owns all its highways, what sets this 38-kilometre stretch apart from the other works is the decision, in 2020, to outsource design, financing and construction to a P3 consortium, which will also operate and maintain the roadway for its first 22 years, at a total cost of $718 million. The Dexter Nova Alliance, the winning bidder, consists of local contractors Dexter Construction and Nova Construction, and BBGI as an equity partner.

“It’s the first P3 project of its kind that we’ve ever taken on,” says Donald Maillet, executive director of highway engineering and construction with the Nova Scotia Department of Public Works. “Our resources were a little bit limited to being able to carry out this volume of work, so we did a study and figured out through our analysis that, because of its size and whatnot, it would be a good candidate for a P3 because of the risk transfer to the proponent.”

Whether administered by a P3 or internally by the province, the upgrades are driven not only by the desire to enhance safety but by population growth that has been strongest in the Halifax area as well as rural areas in the Annapolis Valley and along the south shore.

Two projects interface directly with business parks that are experiencing rapid expansion. An upgrade to Highway 103 in Bridgewater is largely meant to connect the route to existing industries and to access 125 acres recently added for future expansion. The project will add new diamond interchanges, modern roundabouts, intersection improvements, a new overpass and auxiliary lanes designed to reduce awkward merging of traffic.

And work on Highway 107 in the Halifax suburb of Burnside looks to connect with a business park that accommodates more than 1,500 businesses and 15,000 employees and is growing rapidly. 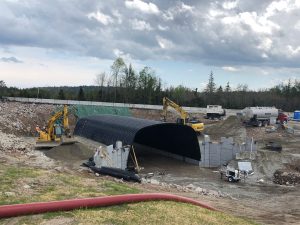 Safety is also a major driver behind new animal crossings in rural areas along Highways 101 and 104, with fencing and thoughtfully deployed tree plantings to steer deer, moose, bears and other wildlife toward tunnels and bridges.

Maillet says his ministry worked with the provincial Department of Natural Resources on environmental assessments to determine common migration routes and to design passageways specifically designed for large mammals.

Additionally, tunnels and bridges are being built along Highways 103, 104 and 107 to provide continuity to trails and paths for walkers, cyclists and all-terrain vehicles.

“We’re working with local communities and groups in creating passages within their systems,” Maillet explains. 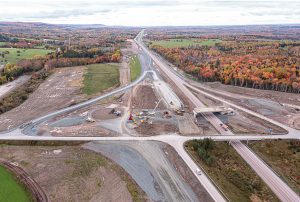 Environmental assessments have also tackled potential impacts to waterways. The vicinity of the Aerotech Connector on Highway 102 has considerable slate rock, which tends to release sulfide-bearing leachate when broken up and exposed to water. To mitigate impacts, crews are monitoring creeks and wetlands for pollutants and using tarpaulins and other protections to keep the rock dry during construction.

Crews also have to protect fish habitat, especially on a section of Highway 101 that crosses the Avon River where the provincial Department of Agriculture operates sluice gates on a rock and earth causeway built 50 years ago.

Maillet says engineers have designed a replacement concrete and steel aboiteau to contain salt water from the Bay of Fundy to let fish migrate inland. That is currently under review by the federal Department of Fisheries and Oceans.

“It’s going to be a unique structure and a lot more complex than the one that’s there today,” Maillet says, adding that the design is meant to accommodate 100-year storms and account for rising sea levels expected with climate change. The existing aboiteau will remain operational while its replacement is installed nearby, and Maillet anticipates project completion within two years of DFO’s approval.

Perhaps the most unique challenge has seen military contractors scouring a section of the planned route for Highway 107 for unexploded ordnances.

As World War II was coming to a close, the Bedford Magazine caught fire, setting off explosions that scattered unexploded devices well off its property. The Department of National Defence deemed a one-mile radius of the site, now called the Canadian Forces Ammunition Depot, to be at risk. As such, Defence Construction Canada, a Crown corporation, has worked to disarm and remove unexploded shells and other scrap munition.

While the very notion of live munitions on a work site should keep any project team member awake at night, the more routine challenges like habitat preservation and maintaining community support also demand meticulous attention to detail and a collaborative multi-stakeholder approach. Having multiple stakeholders has provided some help, however.

Cost management received an assist because most of the 100-series highways are part of the Trans Canada system. That has landed project managers more than one-quarter their overall budget.

“The number of projects and the level of spending wouldn’t be possible without the support of our federal partners,” Maillet says. “We were very successful at leveraging opportunities for cost-sharing with both Infrastructure Canada and Transport Canada to deliver safe and reliable highway infrastructure for Nova Scotians.”