No clear trajectory: Uncertainty likely the only certainty for 2021 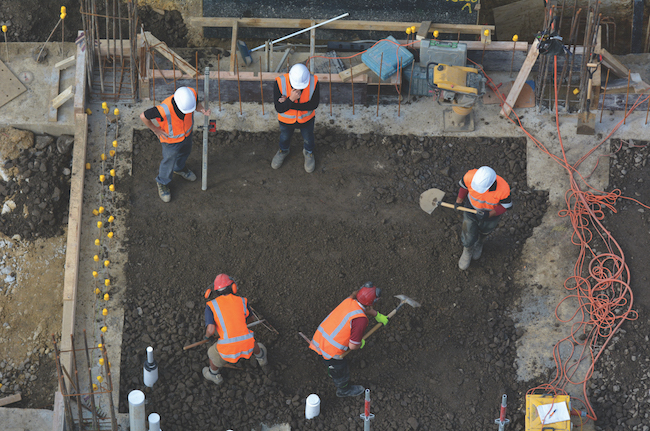 The outlook for the construction industry is cloudy heading into 2021. PHOTO: Adobe Stock/Rafael Ben-Ari

Someone with 20/20 vision, by definition, has normal eyesight in terms of clarity and sharpness. And yet its namesake year has been anything but normal or clear. Rumblings of a mysterious flu-like virus originating in Wuhan, China didn’t really resonate in North America until mid-March, when professional sports leagues suddenly fell like dominoes, putting an unprecedented pause on their seasons. Within a matter of days, school break travel plans were scuttled, classroom stayed shut, and quarantines, lockdowns and mandatory mask and distancing measures began taking hold.

While many business sectors were ordered to close temporarily, to flatten the curve of COVID-19 outbreaks, construction was largely deemed essential and carried on. Still, with case numbers rising and authorities worried about overwhelming hospitals, new protective requirements altered site activity considerably, and a growing roster of product shortages, supply chain glitches and economic uncertainty added to the chaos.

“It’s been a learning experience,” Sandra Skivsky, chair of the National Trade Contractors Coalition of Canada (NTCCC), put it bluntly when asked for her sense of 2020 with the year starting to wind down. Skivsky is also the director of marketing and business development with the Canadian Masonry Contractors Association, which she represents at the NTCCC, and she says the uncertainty has been universal. “Everybody’s turning on a dime. 2019 was a good year for construction, so we were expecting a very robust construction year going into 2020. In fact, the labour force numbers were already strong back in February. But then COVID hit and it was a day-to-day, hour-to-hour adapting process. Every day there was something new and different to deal with.”

While the numbers bounced back to what Skivsky considers “reasonable levels” on the employment side, the net effect has been a 10 to 15 per cent decline. However, Skivsky also points to lost productivity stemming from the various safety protocols and strictures site personnel and business owners must follow. “It’s something that everybody is adapting to,” she says. “Overall, the construction industry has stayed fairly safe and kept working. It’s just that we’ve had to adapt on the fly to a lot of change. And there’s been a cost to that.”

Looking ahead to 2021, Skivsky says she expects the uncertainty will linger. “Every trade I’ve spoken to says activity levels have been good but nobody knows exactly what it’s going to look like going forward. There’s a lot of things in play right now, like commercial space. Would you build an office tower right now? I don’t know. Anywhere where people congregate, there’s a question mark.”

Municipalities, under extreme pressure, might be financially challenged from participating in infrastructure projects where they would otherwise be key stakeholders. “There are a lot of questions about who can do what and when, and what the private sector is going to build,” Skivsky says. “There’s a lot of civil and horizontal construction going on, but that’s a certain part of the industry and doesn’t necessarily include all trades and all contractors.”

Project timing is yet another issue, with a high risk of temporary slow periods interspersed with frenetic activity. “That creates all sorts of pressures on delivery and labour force and training and everything else,” Skivsky says, noting the additional complication of ongoing supply chain and material shortages. 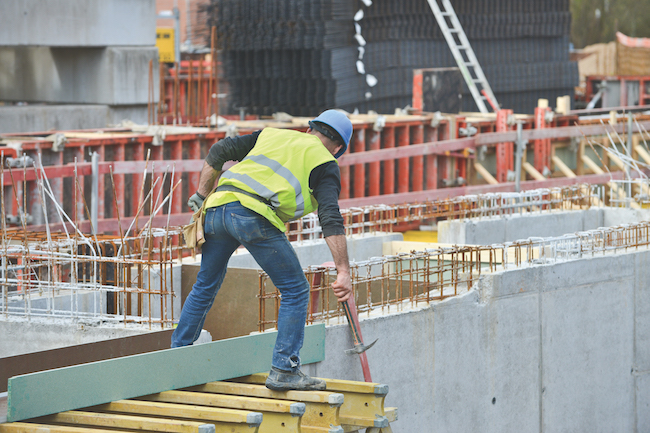 Infrastructure construction is one area expectations are high for the year ahead. PHOTO: Adobe Stock/JeanLuc

Frank Magliocco, Canadian real estate leader with PwC Canada, says COVID has both reversed and accelerated significant trends underway across Canada. Urban areas were increasing in density, for instance, with people choosing to locate closer to their workplaces, and the pandemic has put this somewhat on pause.

“We’re starting to see pockets of suburbanization happening,” Magliocco says, noting corresponding uncertainties in terms of office space needs, especially in larger centres. “There’s lots of question marks, but the pandemic and this [trend to] working from home will have a structural change in the office sector and will have an impact.”

On the other hand, COVID has accelerated the advent of e-commerce, impacting traditional brick-and-mortar retail. “That has made what was a challenging situation for the retail sector even more challenging,” Magliocco says.

John Gamble, president and CEO of the Association of Consulting Engineering Companies — Canada, says COVID’s impact on the industrial, commercial and institutional (ICI) sector has been mixed, with most members continuing to renew. “There’s no question it continues to create uncertainty… but there’s a sense that the industry’s going to come through this year in reasonably good shape, all things considered,” Gamble says, citing supply chain and material shortage issues coupled with new distancing and personal protective equipment (PPE) requirements as factors delaying projects and escalating costs. “A few owners are being utterly irresponsible, trying to relay all those costs onto construction companies and onto design, engineering and construction firms, but other owners have been constructive and collaborative in terms of how we address these types of things. I hope that’s a lesson we can take forward in the post-COVID world, to move away from the adversarial contractual relationship that sometimes gets in the way of getting projects done.”

While the municipal sector has been hard hit, Gamble reports relatively steady public sector work. “There certainly seems to be a willingness of all levels of government to leverage infrastructure to rebuild the economy, and I think that’s well founded. When we had the last recession circa 2009, the Conference Board of Canada concluded that, of all the stimulus measures, infrastructure investment was probably the most effective, and estimated that every dollar invested in infrastructure resulted in $1.20 in GDP. That’s the kind of return of investment I think we’re all looking for to come out of this.” Still, municipalities short on tax income may find themselves less able to participate in infrastructure renewal. “These are things were mindful of, that are adding to the uncertainty,” Gamble says.

Infrastructure and other government investments notwithstanding, Pedro Antunes, chief economist with the Conference Board of Canada, anticipates a tumultuous business environment. “Looking ahead, the recovery will be slow and gradual,” Antunes says. While commercial, institutional and industrial construction sectors rebounded over the summer, when COVID cases were in decline, with some segments even bettering pre-COVID numbers, that trend is expected to abate. “My sense is a lot of construction was put on hold in March and April, and we rebounded because we were making up for lost time. But I think there’s concern for the coming quarters and perhaps even for the coming years if we see major changes in consumer and business behaviours affecting, for example, demand for office or retail space. We’ve seen a huge adoption of online purchasing, and I worry about brick-and-mortar retail.”

So how might Canada’s planning, engineering and construction sectors respond going forward given that consumer and business behaviours may be changing and that the uncertainty is unlikely to go away? There are multiple perspectives.

The ACEC’s John Gamble says green infrastructure projects such as renewable energy and active transportation, while fruitful for some of his members, tend to require considerable up-front investment and consume rather than generate tax dollars, at least in the short term, so he wants governments to also invest in “tried-and-true” economic infrastructure project funds such as the National Trade Corridors Fund to build roads, bridges and port facilities to help promote commerce.

“We want to make sure we rebuild the economic capacity to make these investments, so it’s a balancing act we’re looking for,” Gamble says. 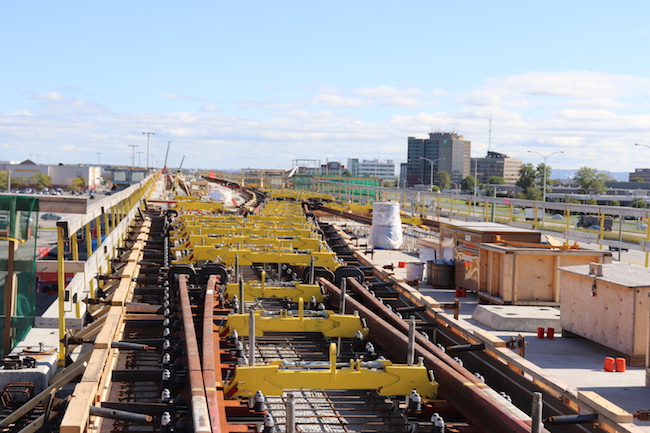 The new Réseau express métropolitain (REM) in Montreal is one of the big-ticket project the CIB has backed. PHOTO: CDPQ Infra

Pedro Antunes, meanwhile, says the timing might be right for governments to provide incentives to invest in renovations or repurposing. “I know the government is looking at a lot of green energy investments, retrofitting buildings, making them more energy efficient. We’ve seen announcements from the Canada Infrastructure Bank (CIB) that there will be more money put towards that. So I think there are opportunities overall.”

“Infrastructure for the sake of infrastructure didn’t work for us,” says John Casola, chief investment officer with the CIB. Roads, bridges and large-scale transportation projects have traditionally carried the way with big infrastructure spends, and these are included in the CIB’s overall budget, but Casola says these tend to be much longer-term, requiring considerable planning and review, whereas current government imperatives, especially in the face of COVID, focus on immediate prospects for project delivery, job creation and economic recovery. “There’s no such thing as a big road, a big LRT, or a big bridge that you could deliver quickly and put people to work and get money out the door,” Casola says. “It just doesn’t exist.”

“There was an absolute flurry of tenders that came out to get some of that work done,” Glen says. Looking ahead to 2021, however, Glen points to COVID’s ongoing financial impacts and expresses caution. “After several years of dramatic drops, to have a little bit of work come back was spectacular. But we all know that the other shoe is going to drop.”

This article first appeared in the December 2020 edition of On-Site. To read through the whole issue click here.