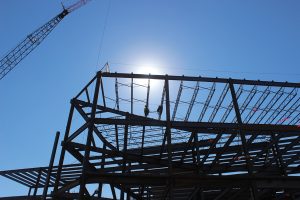 The new Dr. F. H. Wigmore Regional Hospital in Moose Jaw, Sask., serves the Five Hills Health Region, an area containing 54,000 people in the south-central portion of the province. Open since late 2015, the facility is considered the first major construction project in Canada designed and built to “lean” principles. Those involved in building the hospital say the process was faster and cheaper than using traditional methods. While still a niche methodology, lean supporters point to this project and a handful of others as proof that lean can produce real results.

Lean design/construction borrows from both the Toyota Production System used in Japan to streamline the car-making process and lean manufacturing in general. The end-goal in all cases is to increase efficiency by reducing waste. Continuous improvement and saving money are also central aims. While lean has been percolating in U.S. construction circles for a few years, it is still relatively new in Canada.

The decision to design and build the Dr. F. H. Wigmore Regional Hospital (known informally as the Moose Jaw Hospital) according to lean concepts can be traced to a Saskatchewan government commitment to use lean principles in health care. An RFP was issued in late 2011. In February 2012, Calgary-based Graham Construction and Engineering Ltd. picked up a design/construction contract, despite a lack of experience using lean methods.

Graham embraced lean because “it just made sense to our senior VPs once we became exposed to this project. Lean is a very special, highly collaborative approach to design and construction. It mirrored a lot of what we were already doing,” says Art Winslow, director of lean and Integrated Project Delivery (IPD) at Graham.

According to Winslow, the Moose Jaw hospital was Canada’s first major lean construction project. It was also his first lean assignment. He served as the initial project director for Graham in Moose Jaw.

As part of the lean collaborative approach, the project used the IPD process and “Big Room” meetings. IPD is a project delivery model that emphasizes teamwork and waste-reduction. Big Room meetings involve putting all the main participants in one space to work together (physically or virtually) on a regular basis. The idea is to eliminate “silos” and improve communication. 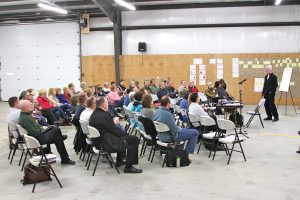 Big Room meetings involve putting all the main participants in one space to work together (physically or virtually) on a regular basis. The idea is to eliminate “silos” and improve communication.

Design meetings regarding the Moose Jaw project began in March 2012, with construction commencing a year later.

According to Winslow, the Big Room concept worked well right from the start: “We met two to three days every two weeks where we all got together—some 30 to 40 people,” he states.

Big Room participants included owners, architects, construction company representatives, consultants, sub-contractors and municipal building code officials. Doctors, nurses and former patients were also sometimes present; “[We] designed the building with them. When you involve end-users in the design of the building, they own it,” says Winslow.

In lean, input from end-users and other Big Room participants is used to find opportunities to eliminate waste—the holy grail of lean design/construction. “Value-stream mapping exercises” (in which the entire design/construction process is carefully analyzed) are also typically held to achieve this end.

During the Moose Jaw project, waste was eliminated on a number of fronts. Some design drawings were directly incorporated into the project’s Building Information Modelling (BIM) software program live to reduce bureaucratic to-and-fro regarding drawing approvals.

Other waste-elimination measures were more physical in nature.

“You think about how you’re going to move materials … ‘How am I going to get drywall up to the third floor?’ We thought about that [and] designed large windows into the ends of the corridors. We could leave the [glass] out, crane the drywall from the ground right in through the windows, drop it on a rolling cart,” says Winslow.

The “5S” concept (sort, set-in order, shine, standardize, sustain) was also used. To this end, a colour-coded system with clear labels was devised to store parts. That way, workers didn’t have to waste time searching unmarked containers for parts. A Kanban system was implemented as well (Kanban is a Japanese inventory management process that uses signage and other tools to indicate when supplies are running low and automatically assigns responsibility to refill inventory).

“A Pull Plan is at the heart of lean thinking… Traditional scheduling means ‘when, who, and what’. A Pull Plan explains ‘how’. It’s really about ‘How are you going to do this? What are the steps involved in all this?’ Thinking backwards from your outcome. You establish what your outcome is, what your milestones need to be. Then you’re working to discover what needs to be done to meet each of the milestones. It’s 180 degrees from traditional planning,” says Winslow.

Organizers aimed to permeate the entire Moose Jaw project with the lean spirit. Construction workers, for example, were rewarded for developing ideas to boost efficiency in their work areas.

“So if a sprinkler pipe fitter came up with a better way to get his waste material from under the machine to the bin, if he could demonstrate that saved production time, we would reward that with a small Home Depot card. What really was amazing was that the reward became irrelevant. It really became about the bragging rights of the guys,” says Winslow.

The Moose Jaw project followed the Green Guide to Health Care, a collection of design/construction strictures on building environmentally-friendly hospitals and other buildings. The Moose Jaw facility was equipped with efficiency lighting and proximity sensors (so lights go out automatically in a room when no one is present, to save energy).

During the summer of 2013, officials arranged for roughly 150 people to attend a Big Room session in Moose Jaw. A special-event was held, dubbed the Lean Summit, at which lean construction principles were explained. The success of the event led to the launch of the Ottawa-based Lean Construction Institute – Canada (LCI – C) in 2015. Winslow is a founding board member.

A volunteer group, LCI – Canada exists to “spread the word of continuous improvement in the planning, design, construction and building industry and to do that through the adoption of lean principles,” says Kathleen Lausman, LCI – Canada co-chair.

LCI – Canada is hosting a lean construction conference in Toronto this spring.

Construction on the Dr. F. H. Wigmore Regional Hospital was completed July 2015, with the grand opening on November 6, 2015. The facility is currently up and running.

The main challenge in Moose Jaw was “the ability of the team to absorb the lean way of thinking and the lean tools. This is my first project using lean and it took me a couple months to embrace it. I have more than 25 years in the traditional construction world, so it took me a couple months to understand what this was. I think that was the way it was for everyone,” says Winslow.

Once everyone grasped the concept, going lean saved time and money, he continues.

Government officials “explained that this hospital should have taken five years from start to finish, and we did it in four. So it’s about a year ahead of what traditional construction would have allowed,” says Winslow.

The lean approach shaved about 20 per cent off costs, he continues, a statement backed up by a March 2, 2015 article on the Global News website. The article was about how the Saskatchewan government saved money by switching to lean for health-care delivery. “Among the largest savings was $34 million in the Five Hills Health Region, mostly due to lean and [similar] initiatives at the new Moose Jaw hospital,” stated the piece.

In Winslow’s opinion, the main obstacle holding lean back is the fact “it’s an unknown, it is different. Right now many people see this as a risk. They don’t understand it. It’s different from what they do and how they do it. They don’t see the benefits.”

That said, lean is growing in popularity: the number of lean construction projects in Canada “has doubled every year since 2012” when the Moose Jaw project was launched, he states. Graham Construction, for its part, has gone on to accomplish “six or seven lean projects,” he adds.

Gary McEwan worked on a lean assignment involving the renovation and expansion of classroom facilities in the trades complex at Okanagan College in Kelona, B.C. McEwan is the manager of special projects for Edmonton-based construction firm PCL. The $35-million college project began in February 2014.

In addition to Big Room meetings, Pull Plans, 5S, and other lean principles, organizers at Okanagan College used “constraint logs” (determining upcoming constraints in the building process then developing solutions to overcome them) and “promises” (workers would make promises about upcoming tasks then would report on the outcome of these promises at group meetings, to use peer pressure to spur motivation).

The renovations and new facilities were completed in early 2016, five months sooner than if the job was done by conventional means, says McEwan.

He compares lean to LEED. While mainstream today, LEED was very much a fringe methodology when first introduced due to concerns over perceived cost and complexity.

“Personally, I think lean is the only way to go these days … it really opens up communications, makes the team accountable,” adds McEwan.

Winslow, who now spends much of his time working as a facilitator teaching lean methods, points out that lean can boost the bottom-line.

“If we can do things in a way that truly allows us to be more efficient, why wouldn’t we be doing it? Why aren’t more groups adopting this, because it does nothing but good for a company? All you have to do is think a little bit differently from how you operate,” says Winslow.