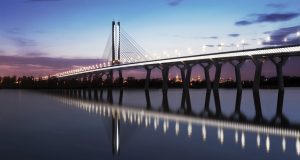 Canada has been home to a variety of megaprojects in recent years. None will be more visually stunning than the new Champlain Bridge (NCB) in Montreal, which
will replace the existing Champlain Bridge in 2018.

The existing bridge crosses the St. Lawrence River to connect Verdun and Brossard. It is the centrepiece of a major transportation corridor, supporting an estimated $20 million in Canada-U.S. trade annually. Some 50 million vehicles of all types cross it each year.

Opened in 1962, years of heavy use, harsh weather and de-icing salt have brought the Champlain Bridge nearly to the end of its usable life. Following a pivotal engineering study in 2010, it was decided to completely replace the bridge.

The Government of Canada signed the new Champlain Bridge Corridor Project Agreement with the Signature on the St. Lawrence Group (SSL) joint venture on June 19, 2015. The total project cost is set at $4.239 billion, with the project agreement accounting for $3.977 billion of that.

The agreement covers the design, construction, financing, operation, maintenance and rehabilitation of the corridor, which includes the new Champlain Bridge, the new Île-des-Soeurs Bridge and reconstruction and widening of the federal portion of Highway 15. The consortium will operate the bridge for 30 years of its 125-year life span.

The 3.4 km bridge has a three-corridor design, including two, three-lane corridors for vehicles and a two-lane transit corridor. It will also include a multi-use path for pedestrians and cyclists. 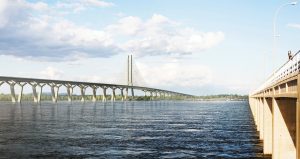 The demanding timeline is the biggest challenge with this project, according to Daniel Genest, an SSL spokesperson. Modular construction practices, including the use of precast concrete and prefabricated steel parts, are essential in meeting these demands.

Designers turned to a Canadian precedent – the Confederation Bridge that links P.E.I. and New Brunswick – for ideas, including approaches to designing the foundation, said Genest. That approach was based on building precast footings on-site and moving them by barge to their final locations, guided by GPS and other metrology.

Work on Highway 15 is part of the project and preliminaries required relocating the water mains in Verdun and the partial demolition of the overpasses. In November, 14 residential properties and some commercial and public properties were demolished, a project that required the removal of soil contaminated with asbestos. The water mains were then relocated, a process that included horizontal drilling under LaSalle Blvd. to reduce disruption.

The new Île-des-Soeurs Bridge will be a key element of Highway 15. The existing bridge has been demolished and 60 caisson piles have been installed for the footings and pillars of the new bridge, which is scheduled to open in 2018.

Marine excavation was one of the first tough jobs. A power shovel on a barge dug excavations down to the river’s bedrock, four to five metres deep in about five metres of water.

• The 500 X 100-metre west jetty, on Île-des-Soeurs, is being used as a prefabrication area for concrete structures and the assembly of steel parts.

• The east jetty supports construction of the eastern part of the NCB. As of July, eight piers were under construction on the east jetty. Six of them are being constructed inside sheet pile cofferdams, temporary structures that permit dry-bed construction and concrete work to take place.

• Another jetty has been built for work on the cable-stayed portion of the bridge.

The NCB will rest on 74 massive footings. The 38 to be positioned in the river are precast.

Each footing has a form with a rebar cage and post-tension loops. The concreting operations take five or six hours. Once the concrete is poured, the footing is left to harden for three days in its form. Some 150 mixer trucks were in use.

The 12 X 12 metre blocks weigh about 650 tonnes. A supertransporter (“Thor the Ant”) moves the blocks to the Floating Foundation Installer (Poseidon). They are then lowered into the water with cranes to an accuracy of 25 millimetres or less.

On the South Shore side, 36 footings are being poured in place on-site inside cofferdams.

The half-km long cable-stayed element of the NCB is probably the biggest engineering challenge of the NCB. The main pylon supports steel cables that in turn support the superstructure and bridge, providing clearance for shipping between two pillars.

Placement of all foundation components must be accurate within millimeters, according to SSL. “Mistakes will accumulate, so if we are not precise, after 22 segments, we can be off by a few centimetres, which is unacceptable,” said Frédéric Guitard, the manager of the cable-stayed portion of the bridge.

Every construction procedure is followed by an inspection and test plan to verify that it was carried out in compliance with the technical requirements in the project agreement and that it meets applicable industry standards.

Two pieces of special equipment are in use on the project.

One is a wheeled transporter (nicknamed “Thor the Ant” by students in a competition), delivered in Feb. The DL-MT1000 was custom-built in China by Dorman Long Technologies of the UK and offers a 1,000-tonne capacity with its 2.5-metre-stroke jack-up system. The machine is smaller and more manoeuvrable than conventional transporters due to its use of aerospace tires to increase the load-carrying capacity of each axle.

The transporter takes precast foundation blocks to the second special piece of equipment, the 1,240-tonne Floating Foundation Installer, used in installing footings in the river. (The pupils nicknamed it “Poseidon” in a contest.)

It can transport parts of up to 1,000 tonnes. The lifting apparatus has a turntable, allowing for 360-degree rotation.

GPS and the FFI’s turntable are used to position the FFI and the footing accurately. Final positioning checks were made with the GPS and precision prisms, located on each footing.

Due to the nearby residences and the natural environment, stringent noise, vibration, pollution and air quality controls are in place.

SSL noise levels may not exceed 75 db during the day and not exceed any neighbourhood’s ambient noise level by more than five db at night (with possible exceptions for activities that would cause excessive traffic congestion if they occurred during the day).

A vibration-assessment plan has been implemented for the entire project. Vibrations may be felt at times but won’t reach levels that would impact local residences, according to SSL.

Two air quality monitoring stations have been established, one by Infrastructure Canada on Île-des Soeurs Bridge and another in Brossard, in collaboration with Environment Canada.

Local wildlife is also a concern. For example, Brown Snakes, an endangered species native to the area, are being relocated away from the work site.

To protect the local fish habitat, SSL is minimizing the amount of work done in water. When setting up the temporary jetties, builders were not permitted to block off more than a third of the width of the river. Fishways will be installed at the west jetty to facilitate the springtime migration of fish. The fishways are monitored to ensure they are passable. New spawning grounds will be established and existing ones rehabilitated.

Credit: A primary source for this article was data provided on the website maintained by SSL at http://www.newchamplain.ca/.