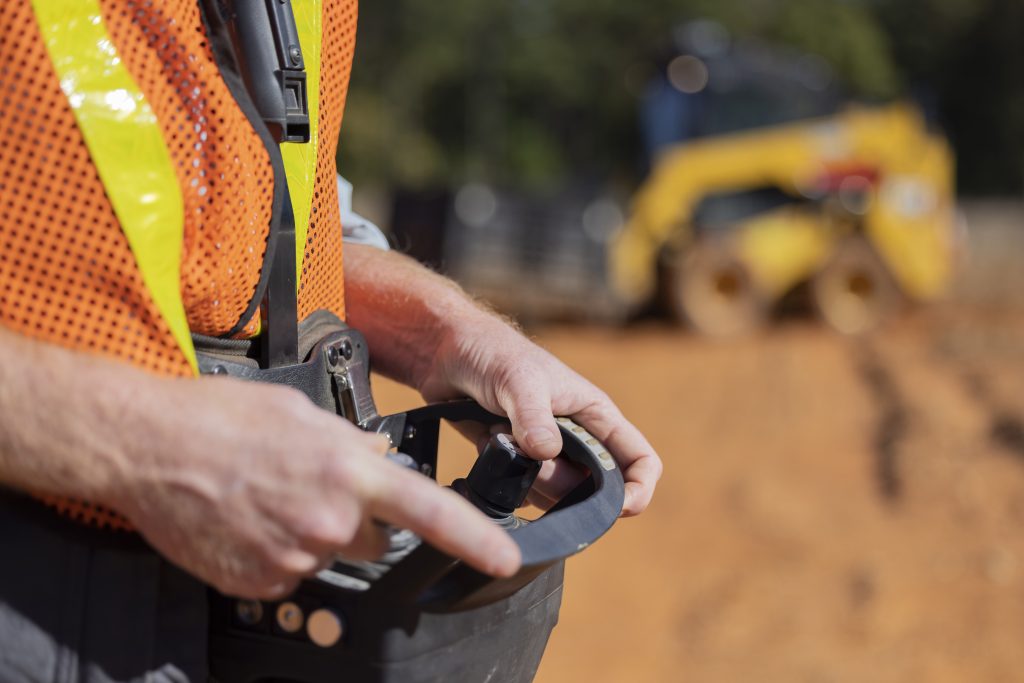 Skid steer loaders remain common on construction sites despite the growing popularity of compact track loaders (CTLs) and wheel loaders. New high-tech options, including remote control, will continue to make skid steers an attractive choice for some time to come, however, especially for applications that match well to their strengths, such as requiring lifting on hard surfaces.

The transportability, maneuverability, and small size are among the advantages skid steers have over compact track loaders, says Luke Gribble, solutions marketing manager at John Deere.

Skid steer loaders, “are much easier to move from jobsite to jobsite compared to compact track loaders in terms of their overall dimensions,” he says.

Compared to a wheel loader, skid steers are “more universal,” adds Buck Storlie, product manager at ASV. “A skid steer can be a tool carrier as much as it can be loader. When attaching augers, trenchers, or road milling planers, a skid steer, from a universality standpoint, is really unmatched on the jobsite.”

Skid steers also tend to be less expensive than CTLs and perform well on hard surfaces.

“There are definitely applications where skid steers benefit the customer. One of them is in planing on concrete and asphalt,” notes Tyler Zima, product specialist for the loader team at Bobcat. “I would also say many lift and carry applications, especially on concrete. You still see a lot more skid steers [in demolition] because you can get solid tires versus wearing out tracks on a compact track loader, which are more expensive to replace.”

BRING ON THE TECH

Skid steer loader tech trends include rearview cameras and telematics systems that monitor performance indicators. Both are becoming more prevalent. Engines are also getting more efficient, with a trend toward zero emission models, and attachments are getting smarter.

Remote control is arguably the biggest game-changing trend in the skid steer market, however. These systems can help to enhance safety, boost productivity, lower labour costs, and expand a company’s reach.

“[You could be] in an office anywhere in the U.S.A. or Canada, and be operating in multiple time zones, doing multiple tasks, and using multile machines,” states Coleman.

With this in mind, here’s a look at what’s noteworthy in skid steer loaders. 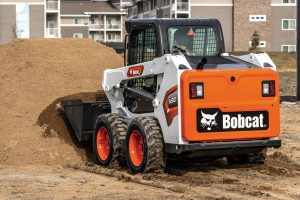 Bobcat has released an enhanced remote-control system and is expanding its customizable Features on Demand (FOD) digital platform to all 60 Platform R-Series skid steer loaders.

Bobcat’s MaxControl Remote Operation solution works from an app. “You download an app, you place a few items on the machine, then you can run that machine from your iPad or iPhone,” explains Zima. Potential uses for remotely controlled skid steers include demolition work, “and other applications where there might be a hazardous or dusty environment inside a building, where they want to keep the operator out,” states Zima.

The FOD platform enables customers who buy a skid steer from a Bobcat dealer to select and demo various performance-enhancing features. The client can purchase the features they like while features they don’t want are deactivated. New features can also be added later.

“They will be for cost conscience customers. If someone wants to get into the field, or for those who do not need all the bells and whistles,” says Zima. 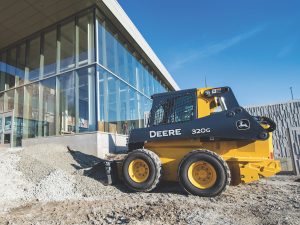 “The latest enhancement to the full G-Series line up is the addition of standard electrohydraulic (EH) controls, which offer increased functionality, to allow operators to customize machine operations based on preference,” states John Deere’s Gribble.

Differential steering is an exclusive John Deere feature that “speeds up the outside turning of tires/tracks for faster jobsite maneuvering,” he explains. 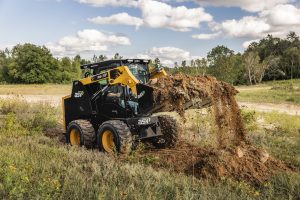 ASV has introduced a new pair of MAX-Series skid steers: the radial-lift RS-75 and vertical-lift VS-75.

ASV’s new skid steers sport an industry- first roof-based escape hatch. This ingenious safety feature offers an alternative to exiting out the rear window — the usual escape route from skid steers during emergencies. Leaving via the rear window puts the operator at risk if they have to climb over a hot engine or other obstacles.

“With the roof-hatch escape, two quick latches, and I can bounce out through the roof,” notes Storlie. “I’m out of harm’s way from a heat standpoint, and from other challenges that can come with emergency exits.”

ASV also adjusted the footstep inset into its skid steers to facilitate easier non-emergency entry and exit, he adds. 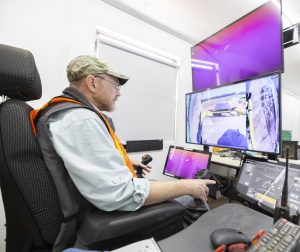 Caterpillar will introduce a “smart” creep control feature and Cat Command for Loading on its D3 skid steer loaders later this year.

Cat Command for Loading is a joystickbased remote-control system that will be available in two different versions. A “lineof- sight” version lets an operator control a skid steer within a 400-metre range via a console in a shoulder harness. In the non-line-of-sight version, a skid steer fitted with cameras, a microphone and other items is controlled at a command station.

The non-light-of-sight version has the feel of a virtual simulator. “You sit in a station or chair, with joystick controls. You have a screen and limited controls on the console as well, and you can interface with a machine pretty much anywhere in the world,” says Coleman.

A sensor and software-based solution, smart creep control is an evolution in existing creep control technology. It is intended for use on D3 skid steer loaders with a cold planer or wheel saw attachment. The load on the attachment is continuously monitored, and the speed of the skid steer is automatically adjusted depending on how much resistance is detected to keep the wheel saw or cold planer running at its most productive speed. 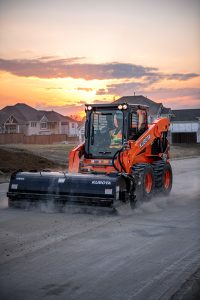 EquipmentWatch pegged the five-year residual value of the SSV75 model at 76.3 per cent.

In addition to having what Kubota literature claims is the “widest cab in the market with roll up door,” the SSV75 features a 74.3 hp Tier 4 engine and a tipping load of 5,380 pounds.

Nate Hendley is a freelance writer and author, and is a regular contributor to On-Site Magazine.