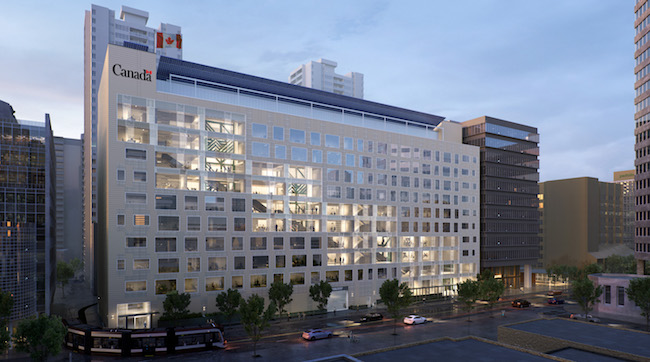 A rendering of the retrofitted Arthur Meighen building in midtown Toronto. PHOTO: Government of Canada

With exposed concrete on all sides and piping from mechanical systems overhead, a compact drilling rig bores slowly into the ground beneath the Arthur Meighen Building in Toronto.

The rig takes about a day to drill a 13-centimetre (five-inch) borehole to its target depth of 150 metres (about 500 feet). Nearly four dozen of these small-diameter holes will eventually extend deep underground from the basement of the 60-year-old federal government office tower just east of the busy Midtown intersection of Yonge Street and St. Clair Avenue.

After the drilling wraps up, the finished product is a sealed hole with two pipes inside it. The lengthy pair of pipes circulate fluid and exchange energy with the earth to either warm or cool the 10-storey office building.

The geothermal system is one part of a $277 million overhaul of the tower that prioritizes slashing the building’s carbon emissions.

The project will essentially strip the structure to its steel and concrete skeleton, replacing all essential building systems, including the electrical, plumbing and ventilation. Along with many other upgrades, a high-efficiency building envelope, green roof and solar panels will modernize the look and improve the performance of the building’s exterior.

Work got underway on the project last year and it’s scheduled to reach completion by 2022. Approximately 300 crew are working on the job under Toronto-based Urbacon, which is leading the project as the construction manager.

The green retrofit is expected to reduce the building’s greenhouse gas emissions by up to 80 per cent, as well as save the government $500,000 a year on energy, according to Carla Qualtrough, the minister of Public Services and Procurement Canada.

“This will make it one of the first federal carbon-neutral buildings and that’s a very important milestone,” she says, adding Ottawa will look to the project for inspiration as it takes on similar projects across the country.

The Canadian government isn’t alone in focussing on building sustainability. And it isn’t just on retrofits that green construction methods and materials are becoming a priority. More and more, public and private owners are demanding designers shoot for ambitious green building targets, such as LEED (Leadership in Energy and Environmental Design) designations with both new builds and renovations.

To continue winning work, contractors need embrace the trend and ensure they have the expertise to take advantage.

A green design is one thing. Executing it is another. 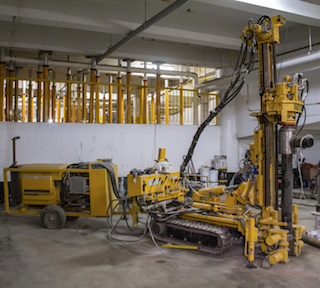 The drilling used for the building’s geothermal boreholes

A typical construction firm that has years of experience with conventional structures won’t likely be in too far over its head when taking on a green build, but that doesn’t mean there isn’t a learning curve.

“There’s going to be a lot of change in the next 10 years or so,” says Mark Hutchinson, vice-president of Green Building Programs with the Canada Green Building Council (CaGBC). “We’re all headed toward significantly more energy efficient designs… All the technologies related to delivering a more energy efficient building are things that the design community, and then the contractor, are going to have to get familiar with.”

Hutchinson pointed to new developments in curtain and window wall construction, the focus on making building envelopes airtight and new wood building materials that are beginning to take timber towers to new heights as a few examples of areas in which construction companies often need some assistance early on.

Mechanical contractors taking on installations of new types of heat pumps and dedicated outdoor air systems likely face a particularly gruelling learning curve over the next decade. The momentum behind green building across the industry will force them to adapt on-the-go.

Tulsi Regmi, a professor at the Angelo DelZotto School of Construction Management at George Brown College, sees the growing movement as a paradigm shift.

“Many advances have been made in sustainability and the trend will continue to accelerate,” says Regmi, whose background is in civil engineering. “This means, there will be newer and more innovative building materials, methods and construction technologies, requiring all contracting professionals to be knowledgeable about these new materials and methods. Because contractors are at the forefront of delivering green projects, they must be keen on learning.”

Adopting lean construction practices, studying up on the LEED certification process and turning to off-site construction or modularization are all areas contractors should be looking at, he says.
“Most importantly, contractors should be open to new ways of doing things,” Regmi adds. “This means cultural change, more education and training, [and a] more engaged workforce.”

Starting from square one on a project is essential. Even more so than on typical jobs, if the architects, owners and build teams aren’t on the same page about the goals of a green construction project from the outset, it’s a recipe for disaster.

“Green projects are best delivered by a procurement system in which contractors are brought into the projects early on,” Regmi says. “They will get involved in value engineering to identify the most suitable materials and methods.” 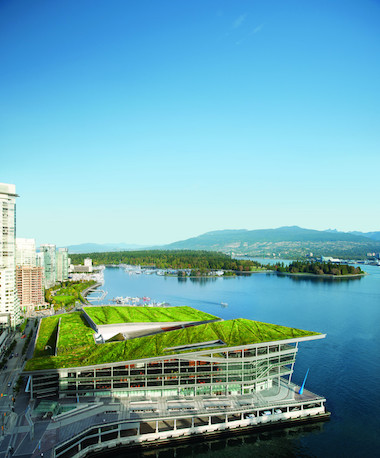 While having a seat at the table is not always within a construction firm’s control, owners are beginning to understand the value of working with their contractors to identify problems early and take a collaborative approach.
Meanwhile, with contractors bearing responsibility for ordering and installing materials, construction firms that don’t already have experience with the innovative building systems required need to educate themselves, or subcontract a portion of the job to a specialist. General contractors have always relied on a variety of trades, but novel building components, such as geothermal systems or rooftop solar, often require a new breed of specialized consultant.

At the same time, “green” is a moving target.

Under LEED, for instance, projects range from basic certification to Silver, Gold and Platinum designations. The program insists on certain prerequisites for certification and uses a point system to award credits based on project features. For new construction and major renovation projects, for example, pollution prevention during construction is required for every job, while optimizing a building’s energy performance can earn the project up to 18 credits depending on the level of optimization.

The more ambitious the green building target, the more important the execution.

“Every little detail counts, whether it’s in the design, or whether it’s making that design real — which falls to the contractor,” Hutchinson says. “Every little seal needs to be airtight, every little bit of taping, everything matters at that point because if you fail on any one little thing the performance just drops off.”

With a steady stream of new materials and an evolving definition of green buildings, there’s also no guarantee what’s considered green today will pass muster a decade from now. Contractors will likely need to aim for increasingly ambitious targets in the years ahead.

While design is likely the most vital aspect of green building projects, the construction phase cannot be overlooked.

In the case of the Arthur Meighen Building, for instance, the contractor cut down on emission by scheduling demolition for a time when the building’s natural gas boilers weren’t needed. New materials were then sourced locally where possible to cut down on transportation emissions.

Retaining the building’s original concrete and steel skeleton was also a significant part of the plan. Instead of tearing down the old building, shipping the rubble to a landfill and then ordering new concrete and steel — both materials manufactured using highly carbon-intensive processes — the very nature of the retrofit helped crews pare down the project’s impact. As emissions reductions become more and more of a priority, Hutchinson expects — and hopes — other rehabilitation projects will avoid wholesale demolition and utilize what’s already in place.

Targeting net-zero carbon emissions, the Arthur Meighen Building is one of 15 projects across the country taking part in the CaGBC’s Zero Carbon Building Pilot Program. Among several other designations, it’s also shooting for a LEED Gold standing. For that certification, waste management during construction and demolition, habitat protection/restoration and an indoor air quality management plan are several other construction-stage areas to watch.

When it comes to waste, many Canadian builders have hit the ground running. According to Hutchinson, waste diversion rates for green construction projects sit around 90 per cent, and the wider industry is following the example.
“That’s trickled down,” he says. “It’s not just in a LEED project where you’re going to see the contractor trying to divert waste and minimize the creation of waste.”

Heavy equipment emissions are tougher to tackle, but proactive contractors are putting programs in place to address the issue. Regmi says firms should be scheduling tasks in ways that minimize equipment idling, as well as begin looking to electric or hybrid equipment as opposed to conventional machines that run on gas or diesel. With the added benefit of fuel savings, there’s a monetary incentive for companies able to go electric.

Like all top-down initiatives though, these strides toward green construction need rank and file support.

“Research shows that one of the most common challenges toward sustainability in general is a lack of awareness and education, apathy, and a lack of sense of duty of care for the environment,” Regmi says. “No green initiatives will ever be successful if the people who are responsible to carry them out have no buy-in.”