‘It’s forwards or nothing’: Crews tunnel beneath the Fraser to new wastewater standards 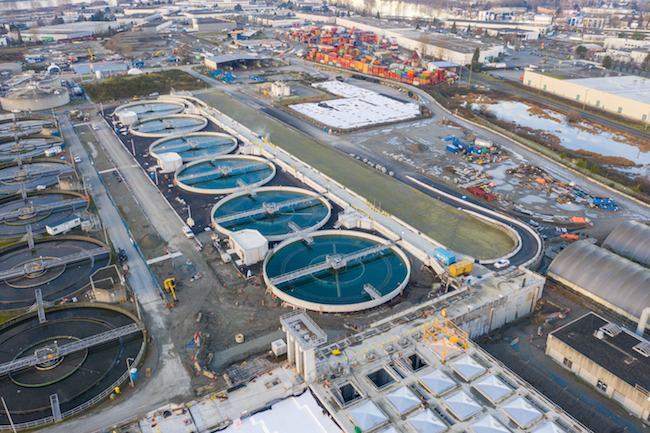 An overall view of the Annacis Island Wastewater Treatment Plant, where a multi-stage upgrade is underway to keep up with the region’s growing population. PHOTO: Metro Vancouver

Burrowing through thick sand underwater, ensuring the safety of workers, and planning for earthquake resiliency are all in a day’s work for proponents of a new tunnel and diffuser system being built as part of a massive program to rebuild and upgrade several Metro Vancouver wastewater treatment plants. The regional government, which includes 21 municipalities, one treaty First Nation and one electoral area, manages water and wastewater systems for more than 2.7 million people, and substantial growth is projected over the next few decades. Factor in increasingly stringent environmental regulations and never-ending worries about a significant earthquake — something not taken lightly on the West Coast — and you have one of Canada’s most ambitious programs to usher local wastewater treatment infrastructure into a new era.

While these projects fall into the same overall program, they’re each at different stages and have their own criteria and timelines, with individual management, contractors and budgets. A brand new North Shore Wastewater Treatment Plant in North Vancouver, slated to open in 2024, will replace the 50-year-old Lions Gate plant and upgrade the level of treatment from primary to secondary by adding clarifiers, digesters and other technology. Metro Vancouver has also approved a similar plan to upgrade the 57-year-old Iona Island treatment plant at the mouth of the Fraser River, near Vancouver International Airport, with an expected 2030 launch date. And, the region is designing an expansion so the Northwest Langley plant, which currently serves 30,000 people, can handle sewage for a geographically broader population of 230,000.

However, it’s work already underway to reconfigure the Annacis Island plant 20 kilometres inland on the Fraser that offers a window on the intensity of the overall effort and the complexity of modernizing sewage infrastructure. The plant, in the City of Delta, is already one of the region’s largest wastewater treatment facilities, processing effluent from 14 municipalities across the Lower Mainland for eventual safe release into the river. Annacis Island treats roughly 175 billion litres of wastewater annually, serving more than a million residents, and Metro Vancouver’s lead senior engineer for the project, Kenneth Hui, says the goals are to ensure the plant has sufficient capacity for a growing population, meets ever-tightening federal sewage standards and can withstand a major earthquake. 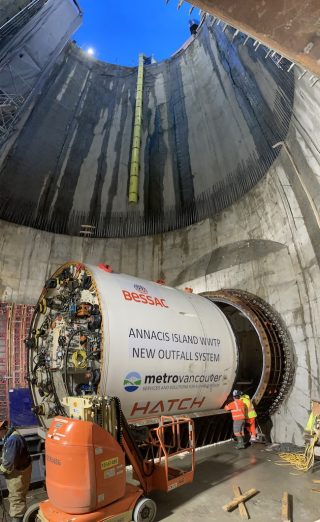 A tunnel boring machine is required to burrow beneath the Fraser River. PHOTO: Metro Vancouver

What makes the project challenging in this regard, he explains, is that Annacis Island lies within a largely sedimentary river delta, terrain that can potentially shift significantly during seismic activity. On the plus side, the Annacis plant is already a strong environmental performer. Its discharged effluent is generally well within allowable limits for biochemical oxygen demand and total suspended solids and the facility already uses anaerobic digesters to break down organic materials to produce biosolids and methane gas. The methane is even reused on-site to generate all the heat and half the electricity the plant requires, reducing greenhouse gas emissions by 660 tonnes annually.

Hui says a major portion of the Annacis upgrade is scheduled for full commissioning by the third quarter of 2021. Crews are putting the finishing touches to five new primary sedimentation tanks and six new clarifiers to bring the total to 18 each. Two new aeration tanks will complement four already in place. But work has involved more than simply installing the equipment. In order to provide future protection from seismic activity, crews first had to densify the underlying sandy, wet terrain using vibro replacement, a technique involving the construction of dense stone columns with a down-hole vibrator suspended from a crane. A preliminary risk assessment helped determine appropriate procedures and vibration levels during ground densification in order to reduce the risk of excessive differential settlement of existing structures. “It’s a balancing act,” Hui says, describing impacts similar to what a minor earthquake could potentially cause. “If you pound too hard, you’re going to have detrimental effects to the existing structure next to you.”

With the plant upgrade largely completed, a separate team is working on a particularly big-ticket item — a $184 million high-capacity outfall and diffuser. Crews are building a 750-metre-long, 4.2-metre-diameter tunnel, to be buried up to 40 metres below ground level, that will effectively serve as a pipeline to a system designed to disperse treated effluent safely into the river through two dozen risers 150 metres from shore. The new pipe and diffuser replace the existing outfall, which is under-sized to match the plant’s added capacity.

Burying the pipe underground is key to seismic resiliency, says Ken Massé, Metro Vancouver’s project manager. “One of the reasons we’re tunnelling at that depth is to get below the liquefaction zone. The system might be damaged by an earthquake, but it will remain operational.” Some of the existing system’s vertically placed steel diffusers have also been damaged over the years, so the new ones will be covered by precast concrete in order to protect them from underwater hazards such as ship keels and tow cables. 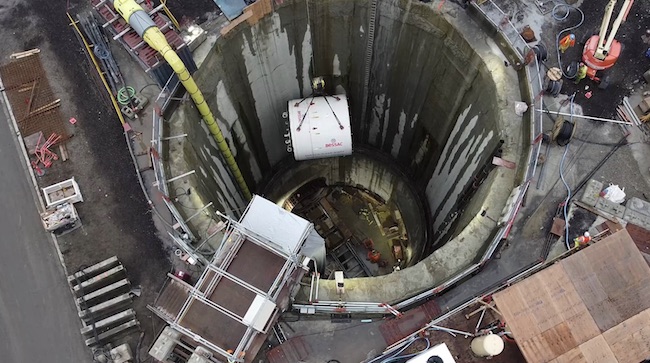 Building a 750-metre tunnel through heavy, thick, wet sand has in itself proven an adventure. With Mississauga, Ont.-based engineering firm Hatch acting as construction manager, the work has been contracted to a general partnership between Pomerleau and Bessac, a tunnel specialist whose ultimate parent firm is France’s Vinci. For this project, Bessac acquired a standard slurry pressure balance tunnel boring machine manufactured by Herrenknecht in Germany, increased its size and added features such as hydraulic propulsion rams and a precast concrete lining erector to protect the machine and workers from the pressure underground. The machine operator even works from an air-conditioned, soundproof cabin.

Tim Langmaid, construction manager with Hatch, says the machine, fronted by a large cutter-head, will burrow through the thick sand and pump the waste slurry to the surface for separation and disposal. As the machine proceeds, it’s designed to temporarily support the freshly dug tunnel while workers inside the machine install a precast concrete liner on the inside to ensure the tunnel remains intact.

“The tunnel boring machine is the method by which we will support the ground, keep the workers safe, and be able to build a concrete lining as the tunnelling proceeds.” Langmaid says.

Crews will install the risers and diffuser system, working from inside a steel cofferdam installed in the river, and with help from large crawler cranes positioned on anchored barges. The whole idea is to create a safe environment where divers are protected from strong currents, inland tides and impacts from drifting obstructions such as logs, Langmaid says. 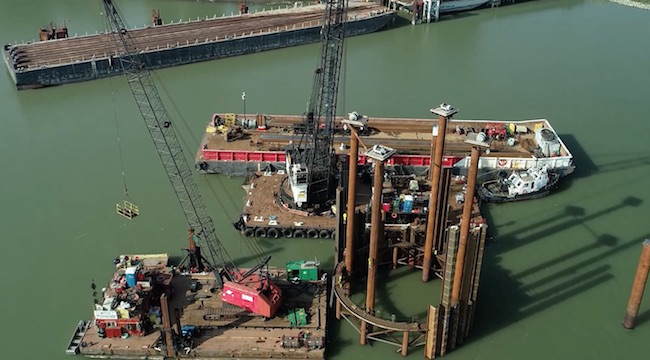 Crews used cranes working from barges to install the temporary steel cofferdam. The cofferdam will protect workers from strong currents and act as a form for concrete. PHOTO: Metro Vancouver

While the cofferdam is essential to work in the river, its construction wasn’t easy. Work was set back several months last year when a late snow melt substantially increased the river’s already strong currents, stirring up the sandy bottom, undermining the integrity of the partially built structure, and forcing crews to restart work already completed. Crews have also had to restrict activity in the river to avoid seasons for migrating salmon.

For an endeavour that’s had its share of challenges, it’s perhaps appropriate that one in particular will prove enduring as a kind of symbolic time capsule marking the project’s completion. When a tunnel crosses a river, the boring machine usually emerges at the other end and is dispatched to its next job. However, the journey at Annacis Island literally ends in mid-stream, at the diffuser. Because these machines cannot do a u-turn and head back from whence they came, crews will disassemble it when its work is done.

“There’s no way of reversing the machine,” Langmaid says. “It’s forwards or nothing.” Some components, including the machine shell and cutter-head, are simply too large and bulky to be retrieved so they will be left encased in concrete underneath the riverbed. “We’re leaving behind as little as possible,” Langmaid says. “Bessac has designed a machine where they will be able to rescue as much of the valuable technology as possible. But some parts will be concreted into the structure and be left behind for the next 100 years while this structure performs its duties.”