From the editor… ‘More work to be done’ in fight against job site racism, discrimination 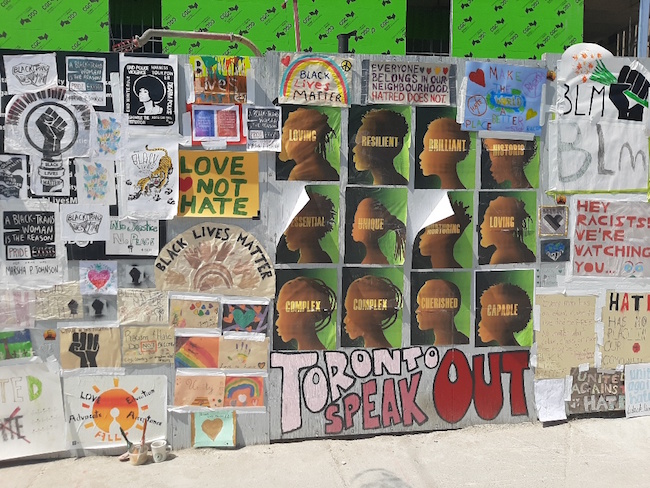 Homemade signs and banners showing solidarity cover the construction hoarding at Michael Garron Hospital after two nooses were found at the site in June. PHOTO: CDCO

Getting general contractors, owners and subtrades to vehemently agree on an issue is often a challenge. On one troubling problem that’s cropped up in Toronto this summer, however, the industry is undivided and is not mincing words.

The most recent incident happened July 28 at one of the more than two dozen job sites connected to the city’s new Crosstown LRT. In the evening, police were called to Eglinton Avenue and Dufferin Street after workers found a noose.

It wasn’t an isolated occurrence. In fact, it’s the fourth such instance reported on a Toronto construction site in the past two months. Nor is the issue limited to one area or company – nooses have been found on projects run by different contractors in the city’s downtown, as well as in both the east and west ends.

To see nooses appear on job sites around Toronto is both appalling and bizarre. Far more closely associated with the United States, and particularly the American South, the hate symbol has been used as an intimidation tool for more than a century.

Whether or not the recent acts have been spurred by increased racial tension here at home and south of the border, the obvious reality is, there was intolerance and discrimination on Canadian job sites prior to the overt displays seen since the beginning of June.

Encouragingly, the industry response has been quick and severe.

Geoff Smith, the president and CEO of EllisDon, was among the most forceful.

“I am appalled and outraged at the hateful and racist actions that took place at one of our construction sites,” he said in a statement, following the uncovering of two nooses at a hospital project in East York in June.

“This will not be tolerated, not now, not ever. We will work with Toronto Police Services, with every resource we can muster, to identify the guilty individual or individuals and ensure they are prosecuted to the fullest extent, and never allowed to participate in our industry again.”

Police hate crime investigations remain ongoing for each of the four incidents, but at the time of writing, no arrests have been made. One worker had been forced to resign from Carpenters Local 27 in response to the most recent incident. A day after the noose was found, the Carpenters’ District Council of Ontario (CDCO) said the local “requested and received the unequivocal resignation from an individual who had recently joined the union.”

At the company, association and government level, the denunciations have come quickly, but there is also recognition that more needs to be done.

Carpenters Local 27 and the CDCO, for instance, have adopted the Charter of Inclusive Workplaces & Communities, and are actively encouraging members to be vocal in denouncing racism. EllisDon has considerably bolstered internal anti-racism initiatives, as well as hired an independent investigator to look into the incidents and report on further ways to address racism on-site. Geoff Smith has also signed the wider BlackNorth CEO pledge, which aims to prompt organizational change at Canadian companies and end anti-Black systemic racism.

“We have worked extremely hard to ensure a culture and environment that allows people to work free of discrimination and intolerance,” Smith said. “Obviously there is more work to be done; and I know I speak for the entire industry when I say that we do not intend to rest until this kind of behaviour is eradicated entirely.”