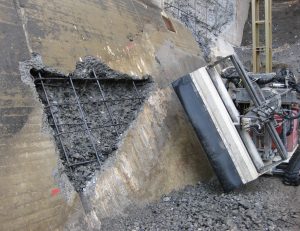 Pouring concrete is a complex process. One slight miscalculation on any of the numerous variables can spoil a whole batch. Unfortunately, mistakes aren’t always evident right away, which can put timetables and budgets at risk. Fortunately, advances in concrete removal methods are making them easier to fix, without demolishing everything and starting over.

For large, multi-phase construction projects, hydrodemolition, which some may refer to as hydro blasting, hydro-milling or water-jetting, offers a fast, cost-effective solution for concrete removal that can minimize the overall impact of errors. It’s even been known to get contractors back on track for on-time project delivery.

Not sure about where this option might come in handy? Here is a look at a few common concrete issues that water-based hydrodemolition can help solve.

Whether it’s a minor shift or a full-on blowout, formwork failures can spell disaster in terms of lost productivity. Correcting the problem often relies on handheld equipment and a lot of slow, backbreaking work that can take a considerable physical toll on crewmembers.

It can also take a toll on the rebar, as heavy vibrations and chipping tools can damage rebar and leave microfractures in the remaining concrete. When this happens, contractors are often left with no choice but to demolish most, if not all, of the structure.

Hydrodemolition is an impact-free concrete removal method that is considerably faster than jackhammers and other handheld options. Using high-pressure water jets as powerful as 40,000 psi, hydrodemolition demolition equipment blasts away layers of concrete, descaling the rebar in the process.

The use of water minimizes the risk of microfractures, creating a structurally sound foundation for any necessary concrete repairs. The use of high-tech, robotic systems can also minimize labour requirements, freeing up the rest of the crew to focus on other tasks like getting concrete forms back in place.

Hydrodemolition may also help when other equipment just can’t reach. I know of a small overpass project that experienced the shift of its formwork where water provided an ideal solution.

While part of the pour met specifications, the contractor needed to remove part of the deck and abutment to a depth of three feet (0.9 metres) and repour to correct the shift. Reaching the necessary depth with jackhammers wasn’t possible without destroying rebar and overall structural integrity, so he turned to hydrodemolition to remove the concrete to make a repair with minimal impact on the structure. 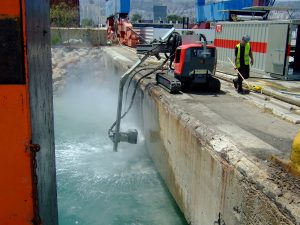 Another contractor was able to use hydrodemolition’s selective removal capabilities to help solve a difficult concrete segregation problem. When water infiltrated his forms and washed out the cement paste, just the aggregate was left behind. The contractor was able to set parameters for the hydrodemolition robot to remove just the segregated material, leaving the sound concrete intact and ready for repair.

Hydrodemolition robots allow contractors to adjust the robot’s stroke to control the depth of cuts and vary the pressure of the water jet to match the task, whether that is removing loose, deteriorated concrete or lowering the sound concrete to a pre-determined depth. This enables pinpoint accuracy in concrete segregation and bleeding situations. Once the parameters are set, the robot meticulously maneuvers over the designated area, removing material according to set values.

Sometimes the concrete error isn’t a result of the concrete mixture itself. Sometimes materials like rebar or anchors are placed in the wrong spot, or a design change necessitates their removal from set concrete.

In addition to setting parameters for stroke and pressure, cutting-edge hydrodemolition machines can be programmed to cut geometric shapes. This allows contractors to remove just enough material to reach the embedded item, whether it’s just below the surface or several feet down.

We worked with one contractor who discovered a need to replace bolts on anchors that were embedded a metre into the concrete. Not wanting to create a large hole and concerned about potential damage to the surrounding concrete as well as the rebar and anchors themselves, he turned to hydrodemolotion.

His crew was able to cut circular holes that were just large enough to free the anchors. Not only did he minimizing the amount of concrete removed, he was also able to get through the job quickly, correcting more than a dozen anchors over a span of 12 hours. 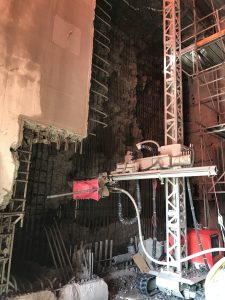 Sometimes repairs or changes are required for existing structures. For example, we had a contractor who needed to remove eight-foot-thick concrete pier on an active construction site for a hydropower plant. His crew was able to remove 4,944 cubic feet (140 cubic metres) in just 53 days. They averaged 141 cubic feet (4 cubic metres) per 12-hour shift. Once the demolition was complete, the contractor poured new concrete onto the bonding surface created by the hydrodemolition process.

The water’s impact creates a rough, irregular profile that is ideal for bonding, and since the surface has already been washed and prepped, there isn’t a need for additional steps like sandblasting.

Fixes that require productivity and precision are prime candidates for hydrodemolition, and nowhere is that more apparent than when facing compressive strength failure. Once a failure has been identified, the use of robot-controlled water jets allow for fast, targeted removal of the weak material without damaging rebar or jeopardizing the structural integrity of the remaining concrete. When removal is complete, workers are left with a bonding surface that will provide a lasting correction.

Keith Armishaw is the business development manager for Aquajet’s North American subsidiary. He has more than 25 years of industry and leadership experience.