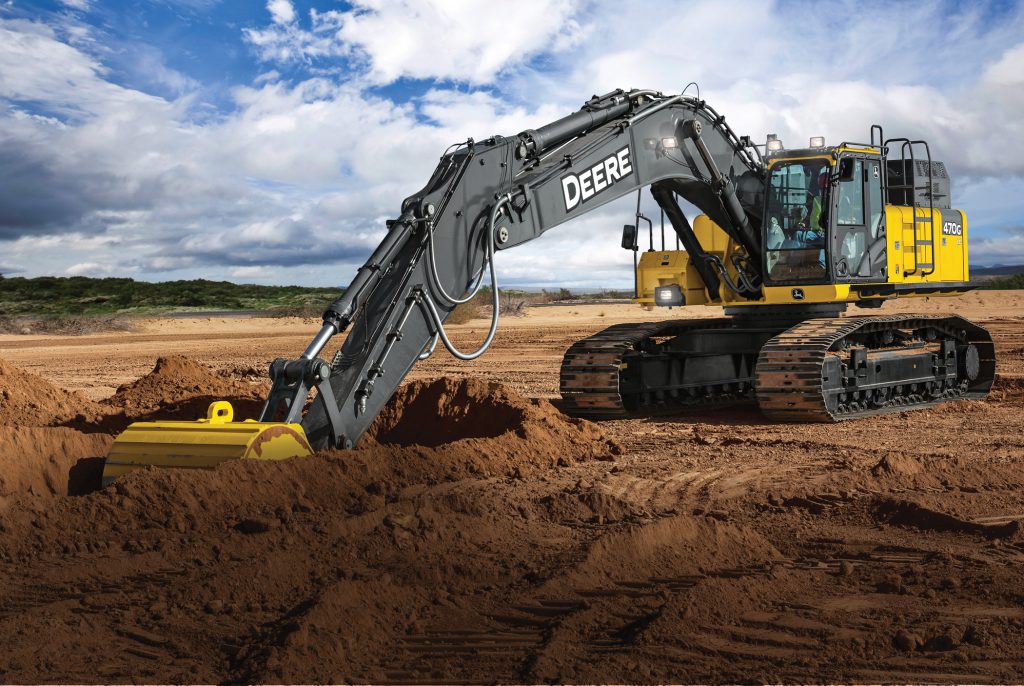 Excavator safety features range from low-tech orange seatbelts to futuristic virtual fencing and even to the point of “Why didn’t we think of this before?”, as is the case of approach lighting — or as Volvo describes it: welcome home lighting.

“You’re going to see cameras become ‘smarter.’ Part of this is about overall enhancing the safety of the jobsite.” Excavator OEMs have an end-goal in mind when it comes to sophisticated camera systems: “They’re all after that 360-degree view,” says Mike Fuller, senior product manager for Hyundai Construction Equipment Americas.

LED lights and approach lighting (excavator lights that can be turned on remotely by the operator) are also becoming more common on excavators.

“We’re seeing a trend towards approach lighting. We offer that on our excavators. Approach lighting increases your safety. On some of our machines now, we have a key fob to activate the lights, like a car, as an operator approaches,” says David Reid, sales manager for earthmoving equipment at Liebherr Canada.

Here’s a look at what else is new or noteworthy in excavator safety features. 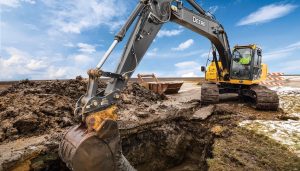 “Once you open the service panel, there is a light on a switch … a decal tells you where the switch is,” explains Steger.

An alarm is triggered when the excavator approaches pre-set limits. Settings can be input for virtual ceiling, floor, wall, front and swing – the left and right limits for the operator’s working envelope.

Over-dig protect is ideal in situations where operators are wary about hitting unidentified buried pipes and cables, possibly causing an accident or injury.

“If you think there’s a utility buried four feet underground, and you’re only excavating three feet, you can set over-dig protect,” says Steger. The system makes use of grade control and GPS data to track the excavator. “It will limit you, and not allow you to dig more than three feet deep.” As for other safety measures, “our compact excavators are all zero or nearzero tail swing,” he adds, explaining that the ability to swing inside, or nearly inside, the footprint of the tracks can reduce the risk of unintentional contact when an operator doesn’t have 360-degree visibility. 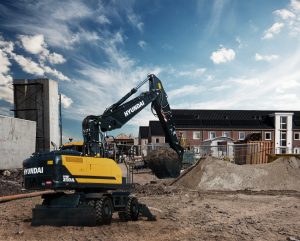 Hyundai’s new A-Series of wheeled excavators are loaded with safety features. In addition to LED working lights and joystick steering, the A-Series comes with an auto safety lock and a seatbelt warning alarm.

The auto safety lock function prevents the machine from being accidentally engaged by the operator. “If you bump into any controls, nothing moves,” explains Fuller.

The seatbelt warning system sounds an alarm, augmented by a visual alert on the cab monitor when an operator forgets to buckle up.

“Hyundai was the first to have a full 360-degree view,” states Fuller. “AAVW gives you a bird’s eye view around the machine, which greatly protects workers on the jobsite.” The IMOD will alert an operator about the presence of anything within a 16.5- foot range of operations, he adds. “It lets you know by colour changes on the monitor as well as an audible alarm.”

An optional radar system that posts information on a secondary monitor in the cab about stationary and moving objects behind the excavator is also available. 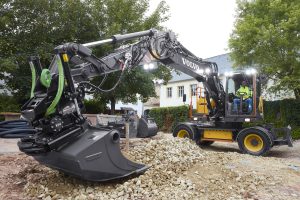 An optional lighting package is operated from a key fob.

“Once you get within range, you click it, and you have what we call ‘welcome home’ lights,” says McLean. “The lights will pop on so you’re not trying to figure out where that first step is to get into a wheeled excavator. You can have your lights on at three in the morning, so you can get in safely.”

Volvo excavators also feature an emergency stop switch, orange seatbelts and orange handrails. “We want everyone to find them quickly. The orange handrail sticks out,” explains McLean. There is also an optional green LED beacon for the cab roof, which only turns on when operators buckle up. This lets supervisors know who has fastened their seatbelt. 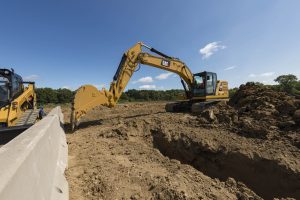 Caterpillar excavators can be fitted with orange seatbelts and 1,800 lumen LED work lights which are, as Ryan Neal, regional product applications specialist for large excavators at Caterpillar, puts it, extremely bright. “They light up like a Christmas tree at night,” he states.

The Cat 2D E-Fence function for excavators offers virtual fence, floor and ceiling, among other settings. If the excavator goes past certain pre-determined work ranges, this sensor-based system shuts operations down.

“We have two standard cameras on our machines. We have a rear and a right camera. We also have the option of a full 360-degree camera. It’s like a drone—a bird’s eye view. There are no blind spots,” says Neal.

Cat Detect and Cat Lift Assist are also available for Caterpillar excavators. Cat Detect is a blended radar/camera system that warns operators when their excavator is getting too close to people, machines, or other hazards. Cat Lift Assist prevents excavators from exceeding their rated load to avoid tipping.

Liebherr is a firm believer in enhancing safety through illumination.

“I think lighting is one of those things you can add to a machine and improve safety on a job site, especially in Northern Canada where this time of year we don’t exactly have the most daylight,” says Reid.

To this end, Liebherr’s A 920 Litronic wheeled excavator has LED lights, as well as standard rear and side cameras.

An optional camera system is available to provide a 360-degree view. Liebherr excavators can be equipped with approach lighting and maintenance lights for engine compartment work.

The A 920 also boasts an overload warning feature, controls designed to minimize operator distraction, and a roll over protection system (ROPS) cab structure.

The A 920 has “a very large cab” and the rear-window serves as an easily accessible emergency exit, adds Reid.

“If there ever was an issue, heaven forbid, you can get out of the rear window quite simply. There’s not a bunch of engine components stacked around it,” he explains.