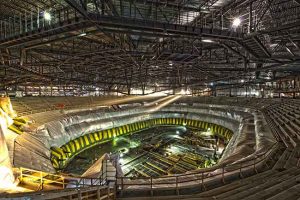 The Rogers Place Arena in Edmonton is a testament to the long-term durability of concrete, and the advantages that this material brings to mega structures. The arena will be unique in the sporting industry as the first NHL facility designed and built to meet LEED Silver designation. It will consist of the major sports arena that includes seating for more than 18,000 hockey fans, and over 20,000 for other major events. It will have a community rink attached and a Winter Garden complex as the entrance to the arena.

The construction partners on this project are the City of Edmonton; primary owner Katz Group who own the Edmonton Oilers; the ICON Venue Group who are the project managers; PCL is the construction manager and HOK is the architect (HOK purchased the original firm of 360 Architecture).

The construction work started in 2013 and is expected to be complete by September 2016, just in time for the beginning of the hockey season. The estimated cost for the facility and the connections to the City infrastructure is $606 million. The City will be responsible for connecting the LRT and a pedestrian walkway to the Rogers Place. The contract is not a typical design/build process but rather a Guaranteed Maximum Price (GMP), which maintains the contract at fixed price unless design changes are made after the contract is under way.

Construction started in July 2013 with pile loading testing at two sites. These were excavated, concrete piles were placed and steel beams were loaded on them to test the piles performance. During this excavation the soil was left on site to minimize truck traffic. The soil was covered to minimize the dust in the area. Concrete trucks accessed the site to cast the piles. After the piles were tested the soil was backfilled into the excavated area.

The actual excavation started in March 2014 with 80,000 cubic metres of material being removed. This was the start of a process where 700 concrete piles were cast for structural support of the complex. Once the piles were complete, the remainder of the concrete and steel structure began in September 2014. The building is being constructed with 24,000 cubic metres of concrete and 9,000 tonnes of steel.

Aspects of the build that assisted in qualifying it for LEED Silver accreditation were 94.8 per cent diversion of waste from landfills totalling 3,469 tons; other areas are LED lighting and the connection to the transit system. This facility will use heat recovery ventilation combined with a highly insulated building envelope.

Another unique feature is that the ice slab is cast on top of a 16-in. structural slab that is over the underground parking. The arena slab itself is 8-in. thick and the application took 320 cubic metres. Under the mesh are miles of cooling pipe that will cool the ice using the radiant mass of the concrete. There are about 129 zone for the cooling pipes. The concrete was placed in 12 hours followed by 12 hours of finishing. The curing was conducted over a month using a wet cure covered with polyethylene, which is optimal for this type of slab.

This project is part of the revitalization of the Edmonton downtown and establishes a benchmark for future structures in the City.