By Corinne Lynds with files from Metrolinx  February 20, 2018 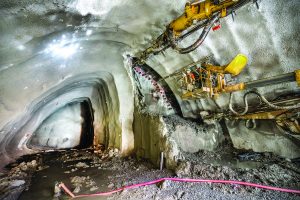 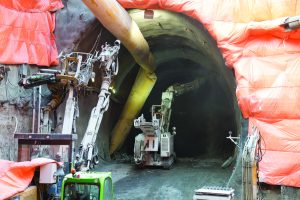 Originally conceived as the Line 5 Eglinton by Toronto Mayor David Miller and TTC chair Adam Giambrone back in 2007, the $6.6-billion Eglinton Crosstown LRT is one of the largest transit infrastructure projects underway in North America, and it’s progressing on time, and on budget.

Owned by Metrolinx and operated by the Toronto Transit Commission (TTC), the line will be part of the subway system as its fifth route. The first constructed phase of the line will run entirely along Eglinton Ave. for 19 kilometres from the future Mount Dennis Station underground to Sunnybrook Park, after which it will run predominantly at-grade along the street’s median to Kennedy station, where it will connect underground with Line 2 Bloor-Danforth and Line 3 Scarborough.

“Offering 25 stations and stops, the new line promises to be faster than a streetcar, bus, or downtown subway,” according to Metrolinx.com. “In fact, your Crosstown LRT vehicle will be up to 60 per cent faster than your current travel time.”

On-Site caught up with Geoff van der Lee, implementation and deputy project director of Crosslinx Transit Solutions-Constructors Metrolinx, to get an update on how construction is progressing.

“Rather than a single project, this is a mega-project with 20 individual construction sites across the length of the LRT line. Each has a different schedule and is at a different stage depending on the construction method used,” explains van der Lee. He goes on to offer updates on key areas:

• The utility relocations needed for all station construction are largely complete.
• Station design is 90 per cent complete.
• The vehicle maintenance and storage facility is nearing substantial completion, and will be ready to receive vehicles for testing in Fall 2018.
• Mining is now underway at two of the three stations to be fully mined. The last will commence in Spring 2018.
• Many of the stations will reach the end of excavation for their entrances and station boxes this year, and we will start building up, rather than digging down. 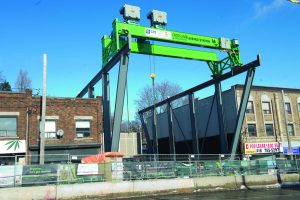 Mining and excavation are a big part of this project. The Crosstown includes a 10k underground portion, between Weston Road and Laird Drive, where 15 below-grade stations are under construction. Eleven will be built using a “cut-and-cover” method, and four, including Laird station, are being “mined.”

Since the start of mining at Laird Station in August, progress has been steady. What started as a few steel supports drilled into the excavated wall has advanced, right in the heart of the city.

“Mining in a dense urban area comes with its fair share of challenges, such as operational logistics in tight spaces and noise mitigation,” said Rachel Pattimore, communications specialist for the Crosstown’s Mined Stations. “By bringing in world-class engineers and other specialists, we can address issues proactively to stay on schedule.”

There are many advantages to mining the stations, including fewer disruptions and inconveniences for drivers, residents and businesses. While crews work below the surface, there are minimal changes to traffic, people can come and go that much easier, and there is less impact on everyone’s daily lives. 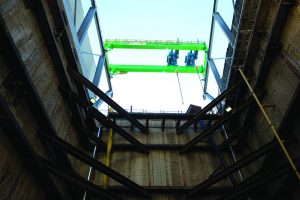 To facilitate mining, cranes are installed at each designated site to help transport equipment/material down below, and the excavated earth, back up. At Oakwood and Avenue, specialty overhead cranes have been installed that are controlled by remote control, and that excel at working in confined spaces. When the Oakwood overhead crane was installed, it was the first of its type in Canada. At Laird, lower density has allowed for the use of traditional tower cranes.

With expected completion on target for 2012, the Crosstown will link to 54 bus lines, three TTC subway stations, UP Express and the Kitchener, Barrie, and Stouffville GO lines.

• The Crosstown is one of the largest transit infrastructure projects underway in North America and it is happening in Toronto right now.
• It is a light rail transit (LRT) line that will run across Eglinton Ave. between Mount Dennis (Weston Rd) and Kennedy Station. It includes:
• A 10k underground portion, between Keele Street and Laird Dr.
• Up to 25 stations and stops
• Connections to 54 bus routes, three subway stations and various GO Transit lines.
• A connection to the Eglinton Maintenance and Storage Facility located west of Black Creek Drive.
• At the peak of construction in 2018, there will be between 3,000 and 3,500 workers at any one time working on the Crosstown project.

The primary underground activities for safe and effective excavation include the need to ensure removal of ground water, installation of supports for the excavation, excavation and concrete works.

As work progresses, it will occur simultaneously underground and at street level. The limited activities visible to the public will include: delivery of materials, removal of soils, equipment and pipes necessary for dewatering and ventilation.

In addition, a water treatment plant will be used to facilitate the majority of the dewatering required during mining. Occasionally, a vacuum truck will be required to support this activity, with every effort being made to minimize this occurrence during the overnight period.