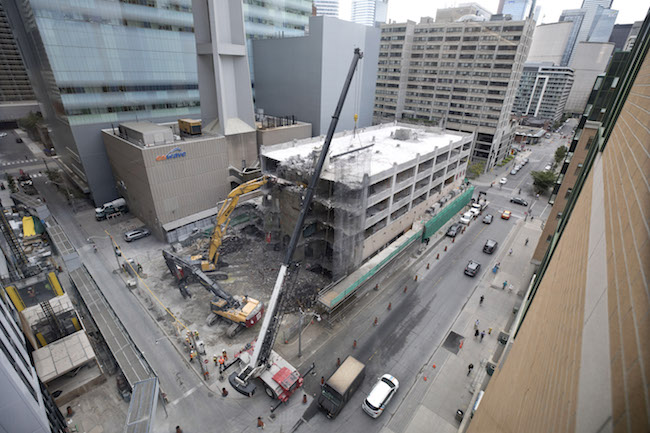 A top-down view of the job site as heavy Kobelco and Volvo excavators demolish the concrete structure. PHOTO: The Hospital for Sick Children

An era ended at the Hospital for Sick Children last summer as demolition crews carefully tore down a distinctive teal pedestrian bridge that had extended over Elizabeth Street in downtown Toronto for a quarter century. A mobile crane hoisted the main span of the bridge away from the hospital entrance in June, marking one of the first steps in a major expansion project that will reshape the busy health care complex over the next decade.

Removing the more than 100-foot (30-metre) bridge cleared the way for the demolition of an eight-storey tower known as the Elizabeth McMaster Building, situated across the street from the main SickKids facility. Priestly Demolition Inc. is tackling the full scope of the demolition work — from taking down the footbridge, to reducing the eight-storey building to the ground and carting off the debris. But with the active hospital across the street, some 50,000 people working in the immediate vicinity and a high-traffic helicopter flight path at the site’s south end, the demo team has its work cut out for it.

Even when you’re used to working in tight urban settings, it’s a challenge, says Kevin Garcia, the project manager at Priestly. “Space, proximity to neighbouring buildings, worrying about the high level of pedestrian traffic [and] vehicle traffic — logistically handling that and keeping that safe, was probably the hardest challenge of the job.”

The first phase of demolition started last February and ran through much of 2019 with crews systematically dismantling the laboratory and administrative building built in 1987.

Before the big iron arrived on-site, Priestly spent weeks laying out a gameplan that included pinpointing the technical challenges, such as equipment reach and slab load limits. Timing was also a significant factor. In place of the McMaster building, SickKids is putting up a new 22-storey tower. The Patient Support Centre (PSC) is scheduled to open in late 2022, meaning the demolition team and other subcontractors taking part in the project need to complete their scope of work and clear out.

Curtis Paddock, the senior construction manager with PCL Constructors Inc., which is taking on the overall building project as the general contractor, says the job is more complex than most.

“It is not unheard of, but it’s a little more intense, a little more unusual than normal,” Paddock says. Along with staying clear of the flight path used by air ambulances and dealing with the tight job site, he points to the Enwave Energy Corp. plant situated next door as a unique challenge. The facility distributes heat to a number of buildings in the area as part of Toronto’s wider district energy system, meaning underground pipes run “sometimes within a foot” of where the foundation for the new PSC will need to go.

“All of it coming together, I won’t call it a storm, but it keeps you on your toes,” Paddock says of the long list of obstacles PCL faced when drawing up the construction schedule. 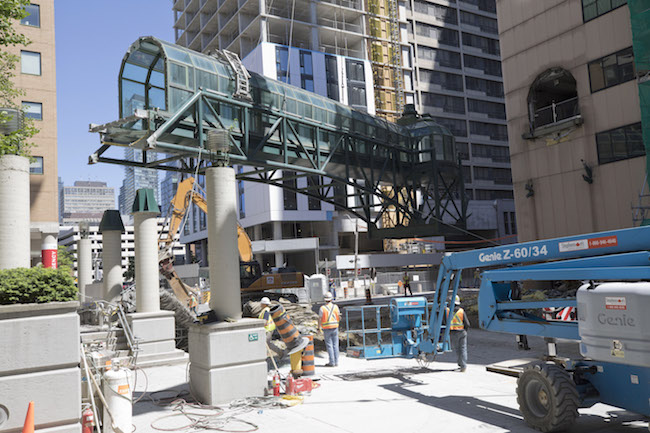 One of the main spans of the pedestrian bridge being hoisted away from the hospital. PHOTO: The Hospital for Sick Children

Once Priestly got on-site, setting up a staging area for heavy equipment and space to process material as the building came down was priority one. Fortunately, at the site’s northwest corner, a single-storey add-on to the main building, not unlike a portable, served the purpose. It was levelled first, giving the demo team enough space to work with.

Dismantling the footbridge between the McMaster building and the main SickKids facility was one of the next items on the agenda, but its weight precluded the team from simply hoisting it away in one piece. “In order to not go crazy with the size of the crane… we had to lighten the load,” Garcia says. A mini excavator equipped with a hammer was sent into one segment of the bridge to break up and remove the concrete. Once the span had been slimmed down, a 300-ton crane was able to lift out the section. Other segments of the bridge were sheared in place.

With the peripherals taken care of, Priestly turned its attention to the eight-storey building itself.

For the interior, it employed a pair of heavy-duty skid steers to strip each floor and used the elevator shafts as “internal chutes” to get the metal and other debris to ground level. Everything was processed through the pre-prepared area at the northwest end of the site. 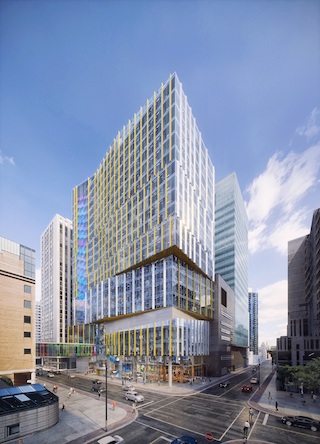 A rendering of the new Patient Support Centre. PHOTO: The Hospital for Sick Children

After cleaning out the inside of the building, the demo team got creative to accelerate the schedule and make up a bit of time.

“We did something there that’s we’ve actually never done on a full structural demolition before,” Garcia says. The crew, which reached about 35 workers at peak, installed shoring within the building and craned a pair of Komatsu PC138s onto the roof to demolish the tower from the top down.

“Now normally, you wouldn’t go through the cost of reshoring floors on a building you’re knocking down, but the only way to accelerate the schedule was to get larger equipment,” Paddock says. “It was a very rigid structure.”

The excavators chewed through one level at a time before being picked up and lowered to the next floor by crane. Priestly dealt with the top four levels of the building, the roof slab included, in this manner, before hoisting the PC138s off the fifth floor and letting the bigger gear take over.

“That was kind of dictated by the close proximity to neighbouring buildings and pedestrian traffic,” Garcia says, pointing to the safety risks. “So, we brought it down to a safe enough height so that when we did perform that high-reach demolition, it was a little less risk.”

A 100-ton Kobelco SK1000 and an 80-ton Volvo EC700C made short work of the rest of the structure, bringing it down to ground level in about three weeks. To mitigate any safety risks as the powerful demo machines worked, Priestly suspended an approximately 100-foot debris screen from a crane. Anything that may have been thrown toward the street would hit the screen and be forced back.

In another somewhat unusual step, Priestly backfilled the building’s footprint with rubble from the demolition.

“We don’t do that very often, but here, given the equipment we had on-site [and] the processors that went onto these machines, when we chewed the slab we could ultimately get it to a foot-minus,” Garcia says. “We could use that, and at the very end we just had to top the entire site with a more fine granular.”

The chewed down concrete and other material formed a platform for the next crew on-site.

While sitting atop the remains of the old building, the drill rig contractor was able to install the initial vertical pieces of shoring for the new PSC. It got to work in late October and capped off its scope in the first few weeks of 2020.

With the shoring in place, Priestly returned to the site late last month to dig out all the material from the former McMaster building and start the below-grade demolition process that will set the stage for the PSC to begin rising. Garcia estimates finishing the demolition and excavation process will take about four months and require carting off as many as 2,000 truckloads of material. Priestly plans to crush the concrete rubble off-site, after which it will be recycled on other building projects. 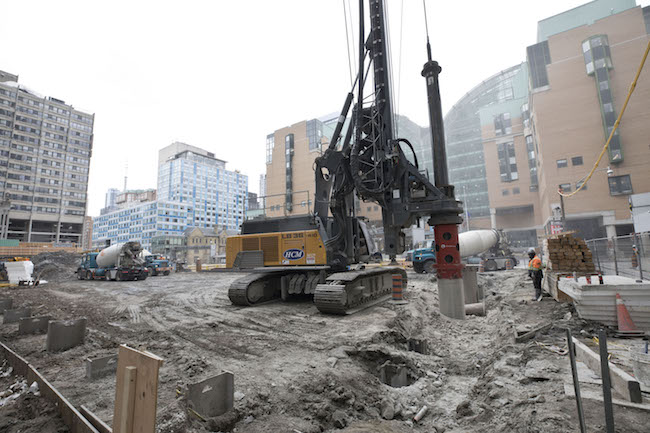 The project site during the shoring installation process. The main SickKids entrance can be seen in the background. PHOTO: The Hospital for Sick Children

As crews excavate the 50 or so feet (15 metres) required for the new building, Paddock points to installing the tie-backs as one of the final sticking points. Having worked on nearby projects, he says there’s “a lot of variation” to soils to the area, meaning it will likely take a bit of trial and error to ensure there’s enough tension to hold the tie-backs in place to support the excavation.

In spite of the last few challenges with the demolition stage, PCL expects the new hospital building to begin rising by mid-2020. “We’ll get to the bottom of the hole by some time in the summer and then at that point, you’re at the bottom and you’re starting to build a new structure,” Paddock says.

In what’s still a relatively unusual step on Canadian construction projects, PCL is employing building information modeling (BIM) on the PSC job. Along with refining the building process, making use of the technology will supply SickKids with valuable information once the new building enters the operations phase.

“They’re going to spend many many times the capital cost of this building during the course of its life,” Paddock says. “They needed a way to understand it and maintain it properly and be able to allow future renovations to take place with knowledge.”

Construction on the new administrative tower is scheduled to wrap up by late 2022, but the work at SickKids won’t end there.

The PSC is the first stage in a multibillion-dollar modernization of the hospital campus known as Project Horizon. Planning is well underway for a new facility for critical care and inpatients at the west end of the current site. The Peter Gilgan Family Patient Care Tower is estimated to open in 2029, followed by the renovated main atrium in 2031. To bring the project full-circle, the hospital also plans to put up a new, wider pedestrian bridge to connect the main facility with the PSC across the street. 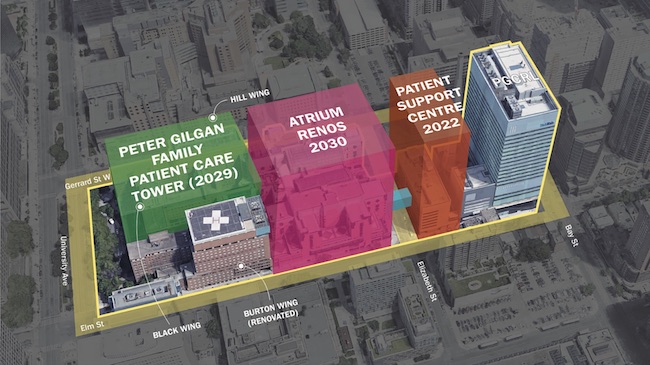 A rendering of the decade-long project to expand the hospital campus. PHOTO: The Hospital for Sick Children

Work at the busy downtown site will keep crews engaged, in more ways than one, for years.

“You’re looking at an organization, SickKids, that takes care of the most prized members of our lives at their most vulnerable moment,” Paddock says. “I think that’s a profound thought each day as you work through the job and you think at the end of the day that maybe you contributed in a small way to that mission.”

This article first appeared in the February 2020 edition of On-Site. You can read the entire issue here.