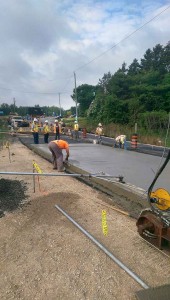 There is a constant battle in the roadbuilding industry to keep up with growth in traffic volumes. A greater variety of material options, and new techniques are saving municipalities time and money.

The concrete industry has long been promoting concrete as a cost-effective durable road solution. This has been an uphill battle with flexible pavements being the material of choice, but has not always been in the best interest of the taxpayer over the long term. The Region of Waterloo’s urban road project is a good example of how material options can solve expensive roadbuilding challenges.

The project is a 1.2-kilometre urban road owned by the Region of Waterloo. At the south boundary of the project is the Brant/Waterloo boundary road, and at the north boundary is Wrigley Road. The existing road is a two-lane urban section with paved and gravel shoulders. The traffic is 8,386 vehicles per day, with eight per cent of those being trucks. This is a main traffic route between Paris and Cambridge in Ontario.

In the initial investigation it was determined the road was a composite section with approximately 180 mm of concrete base (170-190 mm) with up to 180 mm of asphalt on top (130-180 mm). The base is 0-500 mm of sandy silt or silty sand. The asphalt was in poor to very poor condition. After analysis, the engineering firm contracted to perform the initial
investigation for the Region, presented three options:

It was noted in the report that option 1 was not a long-term solution considering the existing conditions and the potential reflection cracking from the concrete base. Option 3 was ruled out due to the concrete base. The only option available was No. 2, which would have increased the road profile by 145 mm.

Applied Research Associates (ARA) were then contacted to perform GPR and Falling Weight Deflectometer testing on the pavement in order to find the limits of the concrete base as well as the condition of the base. ARA’s analysis showed many sections with poor load transfer across the joints, therefore a new alternative was recommended. The new option was for removal of the existing asphalt, addition of 25 mm of asphalt for the debonding layer with 160 mm of concrete across the travel lanes and the bike lanes.

Using the expertise of Concrete Ontario’s (formerly the Ready Mixed Concrete Association of Ontario) Pavement Design Assistance Program (PDAP) comparing option 2 with the unbonded concrete overlay option the Region of Waterloo expects to save approximately $365,000 (initial
capital cost) with the unbonded overlay option. There would also be a further
saving if a life cycle cost analysis was performed looking at the various costs over
a 50 year lifespan.

Mobilization of the site started on May 4th, 2015 starting with installation of a temporary lane using the existing shoulder plus an additional 300 mm of widening. Once the temporary shoulder was constructed, a temporary concrete barrier was placed along the embankment to protect the drivers. Traffic cones were used between the construction and the live traffic. Milling the existing asphalt from the surface to the appropriate depth was conducted to correct the profile. Once the milling was complete, the HMA padding and the 30 mm HMA separation layer were placed.

The concrete paving placed the 160 mm concrete overlay over three days. During the concrete placement approximately 20 to 24 hours after placement, all driveways were reinstated for local residences and businesses. Once the North bound lanes were constructed the staging was then moved over to the southbound lanes and the process of milling, HMA and concrete placement was repeated. Once all the concrete pavement was placed the guide rails, 100 m of curb and gutter, the RAP and HMA shoulders were installed. Lastly, the road was cleaned and the Methyl Methacrylate MMA line paint was installed. The region decided to use a black silhouette around the yellow and white lines to make the lines more distinct. 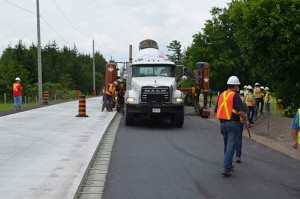 There were no vehicle accidents along this road section during the construction. And there were no lost time accidents for the workers present on the site.

Maturity methods were used in order to get local residences access as soon as possible. Using maturity it was determined that the specified strength of 20 MPa was reached in approximately 15 hours after placement. The field cure cylinders on average took four hours longer to reach strength than the maturity tests. 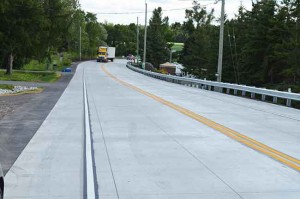 For this project the concrete was an essential element for the construction. Not only was new concrete placed on the surface, but the concrete that has been there for decades was also used in the design. The unbonded overlay was a great option for the Region and it saved them 20 per cent over the best proposed alternative.

This was a challenging project due to the tight geometry, but the specification documents were well made and the contractors involved did an excellent job keeping the project on schedule with very high quality workmanship.

Using maturity methods the contractors were able to keep the local residences and businesses in operation with minimal disruption.

This project demonstrates the potential for the use of concrete paving technology to address the country’s roadway infrastructure needs.

Note: The maturity method is a

technique to account for the combined effects of time and temperature on the strength development of concrete. The method provides a relatively simple approach for making reliable estimates
of in-place strength during construction.