Breaking it down: Crusher evolution prompts contractors to rethink aggregates 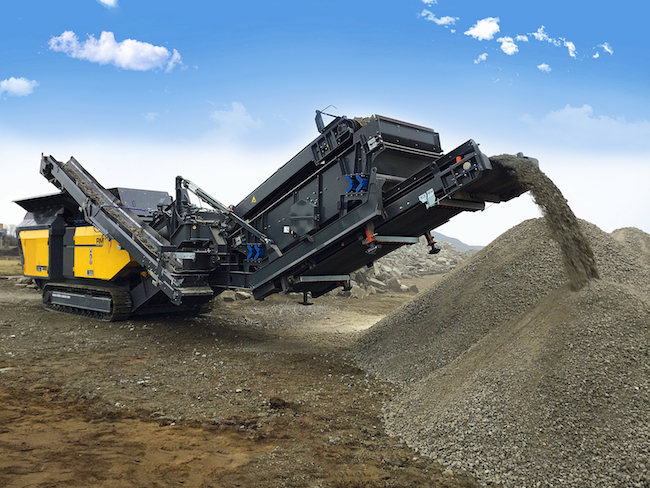 Weighing 90,000 pounds, the RM 120GO! compact model features a production capacity of up to 385 TPH. With a focus on fuel efficiency, the workhorse features a diesel-electric drive system. PHOTO: Rubble Master Americas Corp.

The steep cost of hauling off and disposing of rubble from job sites, only to purchase and truck in virgin aggregate from far-off quarries, has motivated the construction industry to turn its garbage into gold.

“Contractors are spending more money every day than they were the day before,” he says. “Manufacturers have changed their mindset when it comes to crushers because they see the opportunities. They see contractors that are actively paying trucking costs, paying disposal fees, paying repurchase prices and they say, ‘Look, if we can build a crusher that could alleviate all of that pain, there’s a market here.’”

Crushing materials for use on job sites, namely road building projects, has become a more attractive venture in recent years with the evolution of mobile, track mounted crushers. High-powered operation, low fuel consumption and intuitive technology form the bedrock of innovation across all models.

Both on- and off-site, contractors are taking advantage of material recycling to drive productivity, save on costs and lower their environmental footprint.

TAKING CONTROL OFF THE JOB

Builders behind the Regina Bypass, Saskatchewan’s largest-ever transportation infrastructure project, have taken material quality into their own hands.

At a well-oiled crushing operation off-site, crews processed upwards of 10,000 tons of material each day over the course of two seasons — totalling two million tons of aggregate — to be used for the road’s infrastructure. 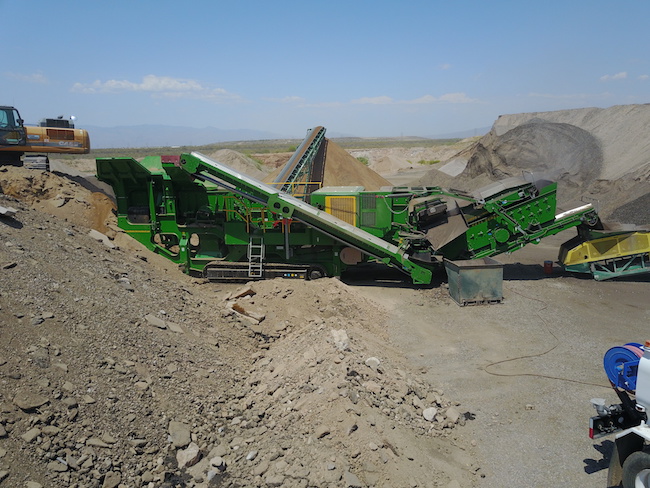 The project, slated to wrap up in 2019, is led by a joint venture comprising Graham, Parsons Canada Ltd., Carmacks Enterprises and Vinci Canada. A subcontractor completed all crushing for the project at a pit provided by the province.

Processing materials from a single source allowed the team to quickly produce quality materials, Doyle says, which helped the project to meet its daily efficiencies and reduce overhead costs.

“When you’re controlling the crushing operation you have better control of your quality,” he adds. “[Getting] an efficient operation running that’s producing quality material, [without] any rework or any rescreening or re-crushing, is really key and that went really well here at the bypass.”

While off-site crushing plants boast big advantages for contractors, the introduction of mobile track-mounted crushers in the last couple decades has marked another major advancement in the equipment.

“These track plants – you come in, you track it off the float and then you’re crushing in like five minutes,” he says. “It’s made the ability to be more productive very high.”

“You can set up a Rubble Master crusher on a job site in 25 minutes flat – done, over-with, ready to work,” he says. Unveiled in October 2018, the RM 120GO! track-mounted crusher is just one of the company’s models offering this key advantage. “That’s a major advancement, especially for contractors,” Faber adds. “Years ago, you’d bring the crusher and then you’d have to bring the screen and you’d have to bring all these conveyors just to do simple recycling.”

Now, all of those components are packaged up in one machine – an innovation that saves more than time.

“[The machine] comes in, the return system folds out, you do a safety inspection and you start crushing,” Faber says. “You’re immediately ready to go and you’re immediately making money.”
For MacDonald, the rise of track-mounted models has made crushing more affordable for contractors.

“That’s why it’s taken off so much,” he says. “When you crush it on-site, you actually have a useable product that has value… With virgin materials being more rare and farther from market, the recyclable materials are a viable resource to turn into a construction building product.”

Now that on-site crushing is becoming more commonplace, the industry is looking beyond concrete rubble.

“Our line of compact scalping screens, which are used to screen dirt or classified dirt or soil… have become much more popular in the last five years,” Faber says. “[Contractors have] taken that mindset to concrete rubble pretty well with on-site crushing. Now, they’re looking at other materials and trying to minimize their costs and their impact on the environment by reusing as much as possible on the job site.”

EFFICIENCY
Despite the drive to advance mobility and ease-of-use on-site, OEM’s aren’t forfeiting efficiency and power.

“Our jaw crusher and cone crusher interlink measure the feed rate and balance the plant so that the feed and output are fully utilized for optimum performance,” he says. “A constant feed to the cone results in great product cubicity, fantastic fuel efficiency and good, even metal wear, all the while maintaining a constant production flow. All big pluses to anybody who is crushing on the job.” 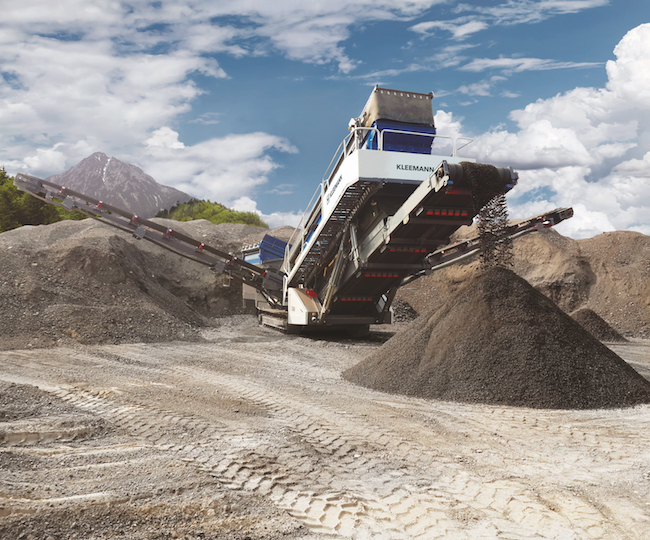 The company’s flagship machine, the Kleemann Impactor, has “proven itself time and time again in quarry and site,” Loftus adds. “Aggressive pre-screen, underpan feeder and closed circuit plant, once again bearing fuel efficiency in mind, are just some of the main features that make it such an impressive plant,” he says.

The push for fuel-efficient operation is just one of a number of advancements trickling down from Europe, with another being telematics, which allow owners, operators and manufacturers to see how a plant is operating, MacDonald says.

“Much of it has to do with power,” he adds. “With the change… to Tier 4 diesel, there’s always an interest in looking to see how the cost of powering a plant can be reduced because the cost of running diesel engines gets higher and higher.”

While the last several years have been marked by a shift away from mechanical plants to hydraulic-drive operation, MacDonald says the next wave of innovation will focus on electric.

“Everybody’s trying something different, something new,” Loftus says. “A lot of our larger stuff can be run off line power; by running the electric plant we can really get ahead of the game with fuel savings.”

Manufacturers are keeping an ear to the ground to better respond to the needs of contractors. Many of the recent advancements in crushers are the result of manufactures listening to their customers, Faber says.

Related
How new crusher technology can make your job easier