Back in 2006, the Derry Road/CN Rail Grade Separation was identified as part of the 2006 Environmental Study Report (ESR) completed for the Derry Road corridor. The report recommended that Derry Road be reconstructed from 2 lanes to 4, including a grade separation at the CN Rail crossing.

The ESR confirmed the existing at-grade crossing at the CN Rail line would not be able to accommodate the anticipated travel demand projected for 2021. An underpass was identified as the preferred solution.

Derry Road is an arterial road running across Halton Region from the City of Hamilton border to Halton’s boundary with Peel Region, crossing through both the City of Burlington and the Town of Milton. The underpass was identified to satisfy east-west capacity requirements, to reduce delays and improve safety for cyclists, pedestrians and vehicular traffic. The crossing consists of CN right-of-way passing through a densely populated area.

R.V. Anderson Associates Limited was retained by Halton Region as the prime consultant to design and manage construction for grade separation capable of carrying two tracks across a four span railroad bridge. New Alliance was the General Contractor. The project included a number of unique challenges requiring innovative solutions for lane configurations and detours to maintain traffic flow and address safety for workers and pedestrians.

Project features include a 4,200 cubic metre precast storm detention tank buried under Derry Road, a fully computerized pumping station and two oil-grit separators to address debris and pollutants from stormwater runoff. In tandem with the bridge construction, Derry Road has been lowered by approximately seven metres and accommodates four lanes of traffic.

The construction of the underpass was accelerated from 2018 to 2013 to accommodate the rapid growth in Milton.

The work was completed in two contracts with the road widening and detour commencing in 2009 and the underpass in 2013.

Before excavating to road sub-grade, augured caissons and piers were constructed at grade level just below pier cap elevation. This approach allowed for cost savings and avoided deep excavation and expensive shoring system.

The caissons extend down and installed into sound bedrock. A total of 34 caissons were installed in rock sockets to support the bridge structure. Each abutment is built with connecting wingwalls for ground stability near the tracks.

The substructure design comprised a large diameter caisson, which transitioned into a smaller diameter pier to increase spacing between the columns while maintaining strength of the system. Forming the size change between pier and caisson became a major challenge and required careful planning. The contractor used a double steel casing technique that allowed them to achieve the design requirement. 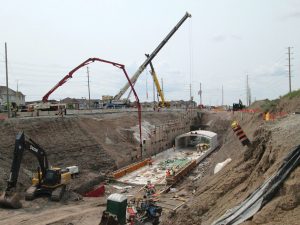 After the bridge substructure was completed, the deck was formed by a falsework shoring system, which extended approximately 2 metres above grade. Constructing the deck in a shallow excavated area was the preferred solution to avoid expensive excavation costs.

The deck slab is 1.5 metres thick and spans over 3 piers. Once the bridge deck was formed and reinforcements were in place, it was ready for 680 cubic metres of concrete. The continuous pour took place over an 8-hour window, which required careful coordination and staging.

All bridge bearings of the piers and abutments are spherical bronze bearings that provide excellent corrosion resistance and full freedom of rotation in all directions. These bearings weigh approximately 1,900 kilograms each. Sliding plates in the bearings also allow for longitudinal expansion and contraction of the bridge deck. The bearings are self-lubricating and outfitted with bird screens to prevent corrosion from feces accumulation.

The lower elevation of the new road at the underpass will result in surface runoff collecting and ponding underneath the bridge if adequate drainage is not provided. The stormwater detention system is used to detain surplus water during storm events and then allow it to drain during periods of lower flow.

The amount of water to be detained during a 50-year storm is 4,200 cubic metres. To accommodate this large volume of water, a storm tank 10.5 m wide by 120 m long with varying height was designed. Rail traffic was continuous through all stages of excavation and tank construction.

The stormwater detention tank consists of a V-shaped cast-in-place concrete channel with upstand walls on either side and then topped with 66 – 1.8 m wide precast concrete arches spanning across the walls. After being completed, the tank was buried beneath engineered backfill before the road was constructed on top.

To pump out the storm water from the detention tank, it was necessary to add a pumping station at the grade separation. A 3 m diameter precast maintenance shaft approximately 15 m deep was constructed to house three submersible pumps. Whenever the tank is full of water, the pumps are turned on automatically and a forcemain carries the water to a nearby manhole.

Before track diversion could take place, a railway protection wall was constructed to support the existing CN freight operation. The track protection comprised of steel pile and lagging, which were tied back with inclined grouted anchors. Track settlement and pile deflection points were installed to monitor and measure movements of the wall during construction.

CN Rail freight operations were required to remain uninterrupted throughout construction. In order to maintain rail operations, a detour track was constructed to the east of the existing track and used until the new CN Bridge was completed.

Careful coordination between Contractor and CN flagging contributed to an integral role for the success of the switchover. 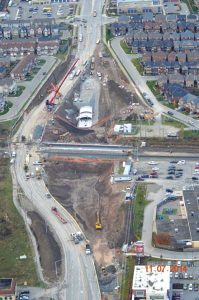 The nature of the construction, with limited space for equipment and materials required a series of road closures that resulted in an enhanced communication strategy with the community. Halton used a wide variety of communication tools from social media to traditional print and on-site Police services, to help the motorists and residents navigate the road closures. A detour road was constructed to maintain traffic around the construction zone.

The underpass is located in a fully developed section of Milton. The project included 1.3 km of Derry Road between Scott Boulevard and Bronte Street and is bordered by Milton District Hospital and Milton Fire Department Headquarters (Station #3). Approximately 30,000 vehicles travel on Derry Road every day.

There are a number of existing and proposed utilities within the Derry Road right-of-way. Existing Milton Hydro transfer station is located in the northwest quadrant of the CN Rail crossing Derry Road. Hydro One transmission lines with Bell Canada plant are located on a pole line southwest and north boulevard of the CN Rail Crossing. Road protection wall at the southwest corner was installed to allow the staging for the excavation.

The grade separation is located in close proximity to many different residential and commercial properties. In combination with high volumes of dewatering, there was risk of settlement damage to adjacent properties without proper project controls. Adding to the risk was the fact that the railroad tracks were also not allowed to settle. Careful monitoring was performed to ensure settlements were avoided.

A detailed survey of the surrounding properties was undertaken. Particular care was taken to look out for existing cracks. Total stations were used throughout construction to survey track positioning and possible shoring wall deflection.

The Derry Road grade separation successfully overcame a number of significant engineering and coordination challenges to provide improved traffic and pedestrian flow to the surrounding neighbourhood. Cooperation between the General Contractor, CN, Town of Milton, Region of Halton and local property owners contributed to overcoming many challenges. The project was completed in 2015, and was recognized late last year with an Ontario Concrete Award for its design and construction innovation.

This article is being reprinted with permission from the Transportation Association of Canada. Vireak Hinh, P.Eng., with R.V. Associates Ltd., and Jennifer Trimble, Region of Halton, are co-authors. Send comments to editor@on-sitemag.com.