An extension is built: Highway 407 tolls for thee

Work on the greenfield project shows modern construction is about more than getting the steel and concrete in place. Many of the $2.2 billion extension’s biggest challenges were environmental 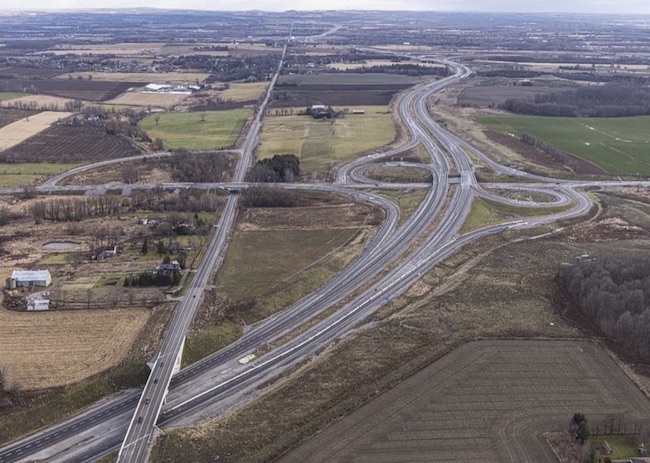 The extension project added 42 kilometres to the east end of the toll road, plus two 10-kilometre connections to Hwy. 401. PHOTO: Blackbird Infrastructure Group

Negotiating with landowners to expropriate farmland and other property. Rehabilitating streams to preserve fish habitat. Installing precast concrete girders to hasten construction. All these and more fit the job description for planners and work crews as they fully opened the eight-year, $2.2-billion eastern extension of Ontario’s 407 tolled highway to traffic in December.

Pauline Van Roon, acting manager of the Ontario’s Ministry of Transportation’s major projects office, said the 42-kilometre extension from Brock Road in Pickering eastwards to Highway 35/115 in Clarington, coupled with two 10-kilometre tolled routes hooking south into Highway 401, are in response to population growth and traffic congestion across Durham Region.

“We expect it will create opportunity for business and accommodate population and employment growth,” Van Roon said. “The highways will also improve and support local transportation operation and provide alternative emergency routes.”

Highway 407 has been operating for more than two decades west of Brock Road, but that stretch is private, owned by 407 ETR. For this extension, the province opted for an alternative financing and procurement model and hired private consortia to plan and construct the roadway and serve as initial concessionnaires for 30-years. This makes the eastern section of Highway 407 and its 412 and 418 connectors Ontario’s first publicly owned tolled highways.

Shovels hit the ground in May 2012 for Phase 1, which extended the 407 to Harmony Road in Oshawa and included Highway 412. By the time 407 East Development Group, a general partnership between SNC-Lavalin and Madrid-based Cintra Infraestructuras, completed that segment in 2016 Phase 2 was already underway, led by Blackbird Infrastructure Group, a general partnership of Cintra Global of Spain (which includes Ferrovial Agroman Canada) of Spain and CRH Canada Group (and its Dufferin Construction subsidiary).

Van Roon said project proponents largely relied on standard materials, machines and methods. What does stand out, though, is the sheer effort that went into building a significant amount of new roadway in a relatively natural area that is rapidly urbanizing. From the start, MTO needed to negotiate with landowners to secure the route. “We followed the (Ontario) Expropriations Act and each property was reviewed on a case-by-case basis,” Van Roon said. Negotiators went so far as to arrange for felled trees to be cut into firewood for locals wanting that.

Because the route passed through considerable open terrain, with fields, watercourses and small wooded areas, dedicated effort went into protecting wetlands and other sensitive areas.

“Erosion and sediment control were a significant concern during construction given that it was a greenfield project,” Van Roon said. She pointed to erosion, sediment control and drainage management plans designed to protect waterways during construction and grading. “Typical mitigation measures included gentle grading to prevent erosion, early construction of stormwater management ponds to catch runoff, seeding and mulching of slopes, and use of heavy duty silt fences, silt socks, and temporary catch basins.” 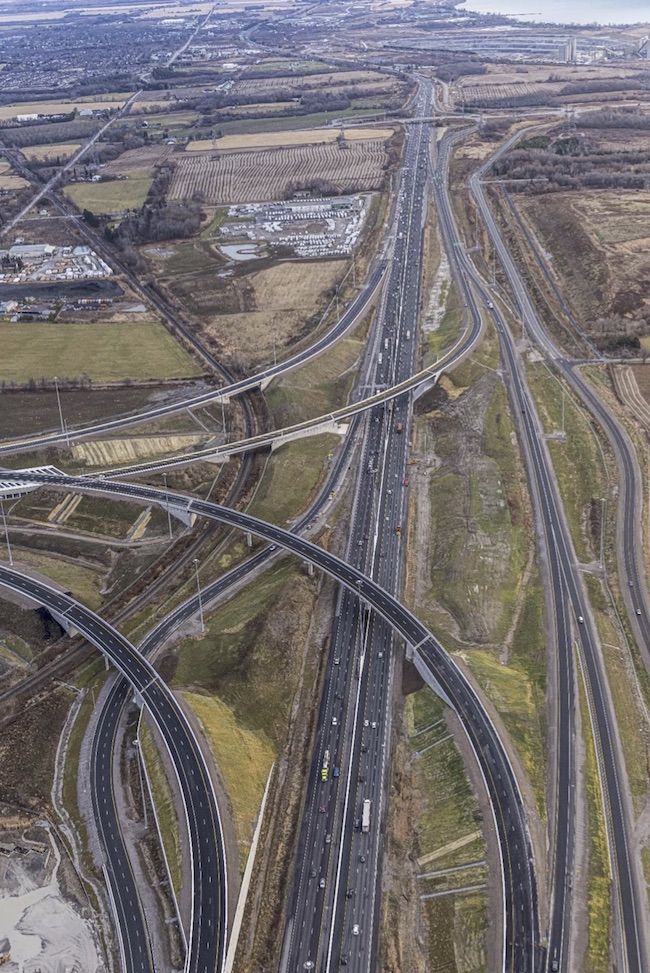 The 407 extension follows other greenfield projects such as the 404 extension north of Toronto. PHOTO: Blackbird Infrastructure Group

One notable challenge was enacting measures aimed at protecting six local species listed as officially at-risk. Guided by provincial and federal environmental assessments and Ontario’s Endangered Species Act, MTO created habitat plans that guided crews as they shored up creeks and planted trees. “We took twigs and branches from some of the healthy butternut trees, grafted them and then planted healthy seedlings,” Van Rood said. For the little brown myotis, workers installed nesting boxes on poles in areas the bat tends to congregate. Streams were realigned and rehabilitated and vegetation planted along stream banks to provide shade for redside dace, a minnow that thrives in cold waters. Crews planted more than 100 hectares of grasslands alongside the route, built nesting structures mimicking ones individual bird species are accustomed to, and restored lands owned by conservation authorities. “We had three birds — the bobolink, eastern meadowlark and barn swallow — and each had its own mitigation measures put into play,” Van Roon said, describing an ongoing working relationship with partners such as the Ontario Ministry of Environment and the Ontario Ministry of Natural Resources and Forestry.

Blackbird CEO David Garcia Santolalla described the project’s environmental requirements as “one of the biggest challenges we are facing comparing with other projects I have been involved in outside of Canada.” In particular, Garcia noted migratory bird nesting seasons that restrict site preparation work from May 1 through July 31. As well, culvert installations, stream realignments and other work where fish are present could only be done between July 1 and September 15. “As a result, there is a great deal of planning and serious logistics involved in getting the work done on a timely basis,” Garcia said.

To manage bridge building and hasten construction, proponents relied more than usual on precast concrete girders, deck components and other concrete and steel structural pieces prefabricated offsite. “We had a precast concrete arch culvert for one water crossing which had a clear span of 11 metres and an overall length of 72 metres,” MTO’s Van Roon said. “These are not common in Ontario.” Crews also installed a 55.5-metre spliced CPCI-girder bridge on Highway 418 over Solina Road, and used multiple precast NU I-girders because their large span-to-depth ratio allows their use as alternatives to steel plate girders.

Garcia said Blackbird used cofferdams as a part of scour protection measures for one bridge, a high-adherence wire-faced MSE wall system for reinforcement and long-term settlement at another bridge, and wick drains, a ground improvement technique using geotextile-wrapped plastic strips to provide drainage and accelerate settlement.

Weather was another challenge. Asphalt could not be laid between mid-December and late April, thus significantly shortening the construction season. “We have had to plan for this and coordinate construction activities to ensure that the project remains on schedule,” Garcia said, noting that wintry weather is a major challenge for all highway construction projects in northern latitudes. 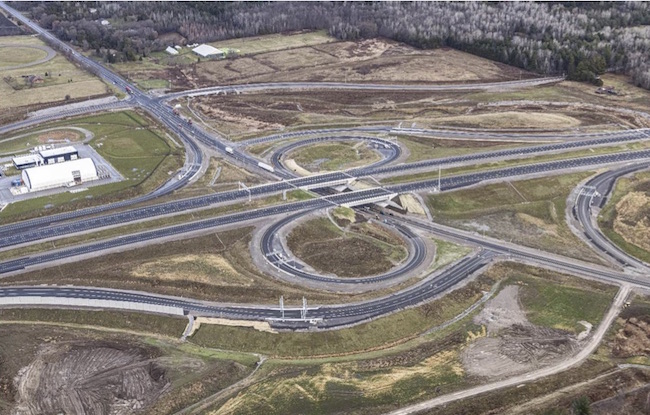 Though publicly-owned unlike the 407 ETR, drivers are unlikely to notice where one ends and the other begins. PHOTO: Blackbird Infrastructure Group

Perhaps the most over-arching consideration was safety. A mandatory site specific health and safety plan, reviewed and updated annually and shared with all workers and subcontractors, helped identify potential work-related risks and hazards. Blackbird also developed a site specific orientation to remind workers of the company’s intention not to let production circumvent any aspect of their safety.

“A total of 4,241 workers were trained to the site specific orientation,” Blackbird design and build director Gabriel Medel Carratala and construction manager Melvin Ramcharitar said, pointing to a six-member joint health and safety committee that met every month rather than every three months as legislated. Committee members undertook inspections, supported workers on site, and oversaw health and safety management. Measures included a Daily Safe Start Card system designed to generate worker discussion about hazard recognition at the beginning of each work day. Project managers and supervisors used smart phones and tablets to log into an electronic form while conducting inspections on-site and to help identify and correct workplace hazards.

“The inspection reports upon completion would automatically be forwarded to (Blackbird) and the employers for action if needed,” Medel and Ramcharitar said, citing a total of 3,732 internal inspections, with time lost to injuries lower than project and even Worker Safety Insurance Board targets. “Health and safety is a relevant matter, and we put effort and resources (into) continuous improvement, analyzing any risk, and sharing (measures) with all staff.”

With just a handful of minor, finishing touches such as landscaping, fencing and signage, Highway 407 becomes the product of two different provincial regimes. Despite its private ownership to the west and public ownership to the east, motorists are unlikely to notice any significant difference from one end to the other. “It will be maintained to the same standards as all of our freeways,” MTO’s Van Roon said, describing a seamless transition with just minor cosmetic changes. Some bridges have embossed images such as maple leaves, and there are assorted local touches where field stone, barn boards and other items were salvaged and embedded into commemorative cairns and gateway signs. “The bridge embossments, gateway features and other aesthetics were a part of the Indigenous and cultural heritage commemoration prescribed through the environmental assessment process,” Van Roon explained.

Calvin Curtis, central region director with MTO’s provincial highways management division, said the completion represents the culmination of many years of work by multiple parties, including government, agencies, consultants, and companies involved in the design-build. “From a transportation corridor perspective, it is the final piece in the 407 corridor which now extends from Burlington to Clarington, providing a critical transportation connection and option for travellers in the GTA.”