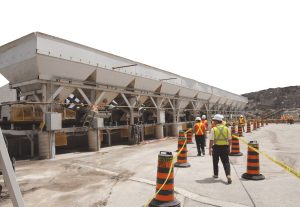 Since the 1970s, Reclaimed Asphalt Pavement (RAP) has been a proven high quality product used in the design and production of asphalt mixes. According to a 2011 report by the U.S. Federal Highway Administration (FHWA), the performance of pavements containing up to 30 per cent RAP is similar to that of pavements constructed from virgin materials. The report also provides best practices for increasing the use of RAP in pavement mixtures, while maintaining high quality pavement infrastructures.

As specifications change to allow for a higher content of RAP in asphalt mixes, quality assurance throughout the supply chain of a road construction project must become more stringent. From stockpile management and materials evaluation to mix design and construction techniques, each stage in handling the recycled material is equally important in ensuring that the end product is of high quality. Higher standards will instill greater confidence in the allowance of increased RAP content. The use of RAP will become more mainstream, which will not only reduce construction costs, but also advance sustainable road building to new levels of excellence and expertise.

“At the end of the day, the use of RAP in the production of hot mix asphalt (HMA) is a way for the industry to be more sustainable, but if the material being produced isn’t the best quality, then the value that we’re trying to provide to the owner isn’t there,” says Ron Sines, Vice President – Asphalt Performance, Oldcastle Materials Inc. “As we’re advancing higher percentages of RAP, quality becomes even more of an issue. We can just meet the specifications of a project, but sometimes owners’ specifications aren’t written to ensure that they get the best quality. We need to meet industry’s expectations, which I would say should be higher. We need to think about the use of recycled materials in a holistic manner and ensure that high quality is a priority throughout the entire process.”

The holistic paradigm begins with a clear understanding of the intended application of the mixture, and if RAP will be used in the surface, binder or base courses of a pavement. Designers need to consider anticipated loadings, and whether or not the mix will require a high stiffness. There is a direct relationship between the material characteristics of the RAP and where it is placed in the structure. A one-size-fits-all approximation is an over simplified approach in assessing the material requirements of a project.

For high RAP content mixes, it is important to conduct durability performance tests. Designers have to run tests to understand the quality of the recycled binder to determine how the virgin binder is going to be impacted by the recycled materials. While the practice has been to grade in six degree increments, continuous grading for both virgin and recycled binders offers a higher level of specificity in knowing the overall binder performance. 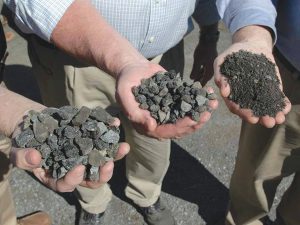 “If I continuously grade the binders, it helps me to better understand the materials and what the end product is capable of doing,” Sines says. “In designing the mixture, maybe I can go to 26 per cent RAP, but not 27 per cent. We shouldn’t just limit ourselves to using 25 per cent RAP content. If we want to run a higher percentage of recycled material, then we have to work a little harder to make that happen. We have to step up to the plate and give owners the confidence that they are getting the best quality.”

A detailed analysis on the impact that RAP has on the volumetrics and constructability of the mix design reveals the subtleties of the mixture and how it influences the durability of the pavement. While the Long-Term Pavement Performance (LTPP) program has been around for decades, the tool is not widely used by designers in determining the reliability of the binder in their mixes. However, with the use of a higher RAP content and continuous grading, knowing the reliability of a particular binder is essential.

Developed by LTPP, LTPPBind is a software tool that uses historical data from 7,920 weather stations throughout North America. Drawing on this data, LTPPBind determines the estimated high and low air temperatures for a specific site and provides a low pavement temperature model for Superpave binder selection. Designers have improved temperature estimates of depth and reliability in PG selection, which helps them to develop more custom mixes.

Quality control in the management of materials is also becoming more sophisticated, and has its own set of best practices to ensure that pre-production RAP is sorted, stored and processed to a higher standard. Moisture control is critical and, ideally, stockpile yards should be graded and paved so that water is directed away from stockpiles and the RAP is kept free of moisture. To help reduce the moisture in stockpiles, RAP should be covered with a shelter or building and RAP should be placed in a well-built conical stockpile. There should be no depressions in piles to avoid any accumulation of water.

“Putting RAP under cover isn’t as widespread as it should be, but moisture control is another example of the attention to detail that is needed in managing recycled materials,” Sines says. “To dry off all of that water, I need a higher temperature of my virgin aggregate and, if I’m using a higher percentage of RAP, I have less virgin material to transfer that heat. This is a cost issue. If you’re using more burner fuel, energy costs are going to be higher and you’ll have more emissions. When, really, all you have to do is cover your stockpiles and have the proper drainage to keep the RAP as dry as possible.” 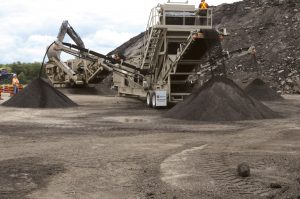 While some agencies require captive stockpiles, with RAP coming from a single source, it’s more common to use RAP from continuously replenished stockpiles. RAP from multiple sources must be processed to create a uniform material with no segregation. It is considered a best practice not to further crush millings, but to use it as-is in mix designs, or to screen the milling to remove larger particles. The crushing process should ideally only break up agglomeration, so that the integrity of aggregates remains intact. There is a variety of crusher equipment used for processing RAP, but the Horizontal Shaft Impacter is the preferred technology because it breaks up chunks of pavement rather than reducing the size of the aggregates.

Stockpiles of fractionated RAP offer flexibility in meeting mix design requirements. Typical gradations include 3/4” to 3/8”, 3/8” to 3/16” and minus 3/16”. Fractionating should be considered when a plant site has space for multiple RAP stockpiles and when typical specifications allow more than 20 per cent RAP.

“Fractionating is a more costly process, so if I’m usually using 15 per cent RAP in my mixes, then it isn’t worth the expense,” Sines says. “However, if I’m using 50 per cent RAP, then I need different gradations to target the mix that I’m trying to produce. As your recycled content increases, your controls are going to have to increase, and fractionating RAP is just one of those controls.”

Not all mixes have the same amount of RAP, which can be problematic in the production of mixes. High RAP content may raise baghouse temperatures above what is typical. Plants have to be configured to accommodate a range of RAP usage, and operators need to calibrate the burner to offer the highest level of flexibility.

The construction of a pavement with higher RAP content is the final phase in transforming the recycled material into a valuable component of a top performing pavement. Best practice includes ensuring that the mix is delivered to the construction site at the right temperature, and that it doesn’t get segregated from the truck to the hopper. Because high RAP mixes are stiffer, there is a direct correlation between paving speed and/or the need for more compaction equipment. Density levels must be precise to ensure that the material is impermeable to water. While some projects, such as a parking lot, may not specify a high level of testing, best practices call for the same testing diligence that would be afforded a roadway to ensure that the product being delivered to the owner will perform.

“We’re now at the point of increasing the amount of RAP while producing high quality mixes, and this requires a lot more attention to detail,” Sines says. “Economically, there are a lot of benefits. If I am able to run higher recycled levels than my competitors, it impacts my success in winning contracts. The cost of materials goes down, but I have more jobs, which forces competitors to up their game. As the bar gets raised, the competition has to keep up, or go the way of the dinosaurs.”

This article is being republished with permission from the Ontario Asphalt Pavement Council. Lisa Fattori is a freelance writer, specializing in the construction industry. Send comments to editor@on-sitemag.com.