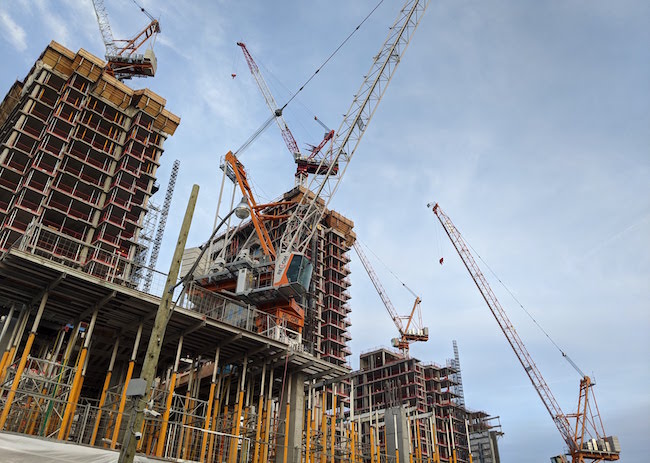 Nearly 43 per cent of the tower cranes at work on skylines in 14 of North America’s largest urban centres are concentrated in a single city.

With commercial and mixed-use developments booming, Toronto now has 208 cranes, more than four-times its closest rival, according to the latest North American Crane Index from consulting firm Rider Levett Bucknall.

The 68 per cent, or 84-crane, increase from last fall runs up the score for Canada’s most populous city, which has led the way in the simplified construction activity metric for years. Of the 486 cranes RLB tallied across the 14 Canadian and U.S. cities included in the count, Toronto had more than two-fifths.

“There were 20,000 condominium starts in 2020, accounting for the majority of the cranes [in Toronto],” RLB noted in its latest bi-quarterly report. With the pandemic decreasing the number of people moving to the area, the consulting firm said lower housing starts — and crane counts — could be on the horizon, however.

With 45 tower cranes, Washington DC placed second in the Q1 2021 crane count. Los Angeles and Seattle each finished with 43, while Calgary’s 35 earned the only other Canadian city included in the count a fifth place ranking. The RLB count covers many of North America’s largest cities, including New York and Chicago, but it is not an exhaustive list of every crane on the continent.

Along with the Q1 crane count, RLB also released its Quarterly Cost Report for North America, which found the price of construction materials increased “strikingly” over the past 12 months. The consulting firm’s comparative cost index records an increase of just shy of six per cent in Toronto and roughly 4.5 per cent in Calgary between this January and the same month last year.