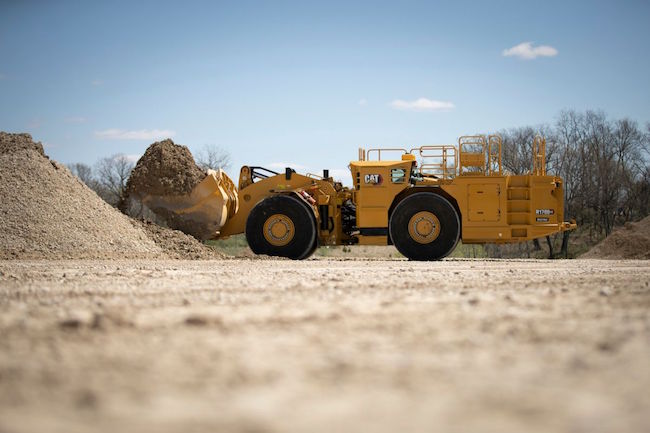 The new Cat R1700 XE LHD will be introduced this September at MINExpo 2021. PHOTO: Caterpillar

Nouveau Monde Graphite Inc. said June 22 it has signed a deal with the equipment giant that will lead to the development, testing and production of Cat zero-emission machines for the Matawinie mine, which is currently being developed in Saint-Michel-des-Saints, Que.

Arne Frandsen, Nouveau Monde’s chairman, said initial talks with Caterpillar got underway about two years ago as the Quebec-based firm began refining its plan to build a zero emissions graphite mine. The site is also designed to be one part of the wider clean energy ecosystem; it will produce anode material destined for the lithium-ion battery makers and fuel cell producers.

“Today, alongside Caterpillar… we can bring the zero-emission machines vision into reality,” Frandsen said in a release.

Nouveau Monde is working to start commercial operations at the Matawinie mine and its materials plant in Bécancour by 2023. The company’s mining equipment will not be entirely zero-emissions immediately, however. The miner said the development agreement with Cat sets a 2028 target for fully deploying the all-electric mining fleet.

Denise Johnson, the Caterpillar group president responsible for its Resource Industries division said the collaboration deal is an “important milestone” for the mining industry.

“Through integrated technology, machines and services, the entire Caterpillar team is proud to support Nouveau Monde as they work towards constructing and establishing their first zero emission mine,” she said in a release.

Throughout the equipment development process, Cat teams will work with those at Nouveau Monde to tailor the machines to fit the miner’s commercial production needs. Caterpillar has been testing electric mining equipment for several years. In 2017, for instance, it began putting a prototype electric underground mining load haul dump (LHD) loader through its paces at its proving grounds in Peoria, Ill. Earlier this month, it offered a first look at the new Cat R1700 XE LHD, a 15-tonne battery electric machine designed for underground mining applications. The R1700 XE will officially premiere at MINExpo 2021 in Las Vegas this September.

Along with electric advances in mining equipment, driven largely by the need to eliminate on-site, underground emissions, Caterpillar and other equipment makers continue to make headway on electrifying construction equipment. Excavators and wheel loaders, mostly on the compact end of the market to date, have been among the first to start shifting away from diesel.