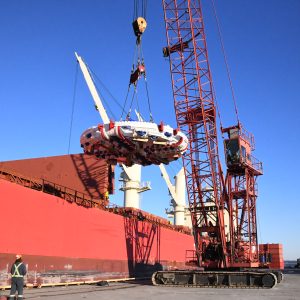 After a voyage across the Atlantic Ocean, the Tunnel Boring Machines (TBMs) for the Scarborough Subway Extension and the Eglinton Crosstown West Extension arrived in the Ontario ports of Oshawa and Hamilton this week.

The three machines were manufactured in the German town of Schwanau, before beginning their trek to North America, taking similar paths to arrive on Canadian shores.

The machine that will dig the 7.8-kilometre Scarborough Subway Extension left Dutch shores late last month, travelling across the Atlantic, into the St. Lawrence Seaway, and eventually to Lake Ontario, before docking at the port of Oshawa.

Around the same time, the two TBMs that will dig the 6.5-kilometre tunnels between Renforth Drive and Scarlett Road for the Eglinton Crosstown West Extension left Antwerp, crossed the Atlantic and travelled down the St. Lawrence Seaway, before arriving at the port of Hamilton.

“Projects like the Eglinton Crosstown West Extension and the Scarborough Subway Extension will not only benefit the communities where they are being built, but the region as a whole,” said Phil Verster, Metrolinx president and CEO. “We’re happy to see these incredible machines arrive through local ports in Hamilton and Oshawa as part of their journeys to their respective launch sites.”

Crews at the ports have started unloading. 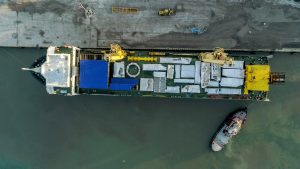 An overhead view of Jumbo Vision, docked in the port of Oshawa with its cargo. (Photo provided by HOPA Ports.)

The pieces for the Scarborough Subway Extension will be transported to the launch shaft site in at Sheppard Avenue and McCowan Road in Scarborough later this month and into the new year, while the cutterheads for the Eglinton Crosstown West Extension are expected to make their way to the tunnel launch site at Renforth Drive as early as next week.