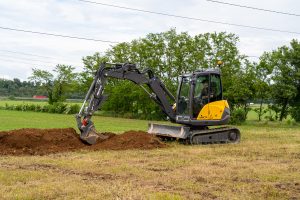 Mecalac has added a new dealer in British Columbia: Gear Equipment. The Surrey, B.C. dealer was one of seven new North American dealers that the global designer, manufacturer and distributor of compact construction equipment for urban environments recently welcomed to its growing network.

In addition to Gear Equipment’s Surrey location, dealers were added in Virginia, New York, Tennessee, Idaho, Kentucky and Colorado in the U.S.

“Mecalac is fully committed to expanding its presence in the market by continuing to add dealers who share our philosophy and give customers practical resources to help improve productivity,” said Peter Bigwood, general manager for Mecalac North America. “Expansion in these regions also allows us to grow awareness of Mecalac’s innovative designs and better serve our existing customer base.”

Many of the dealers feature Mecalac’s complete line of machines, including the MCR Series of crawler skid excavators, the MWR Series of wheeled excavators, AS Series swing loaders and dedicated rail-road excavators.