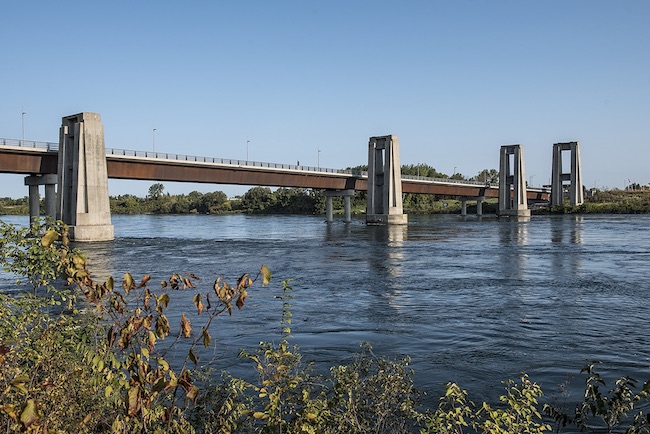 The three in-water piers will be demolished. The final pier on land has been converted into a lookout. PHOTO: FBCL

The funding from the Federal Bridge Corporation Ltd. will pay for the removal of three in-water piers from the old high-level North Channel Bridge, which once connected the eastern Ontario city of Cornwall with Cornwall Island in the St. Lawrence River. A separate bridge spans the channel south of the island and leads into New York.

The original North Channel Bridge was demolished after a low-level replacement opened in 2014. Three of the original piers, however, have remained in the water adjacent to the new span. A fourth pier situated on land has been converted into a public lookout and will remain in place.

The FBCL has blamed funding concerns for the demolition delay, but is now set to move forward with the work. The federal bridge overseer said that Oakville, Ont.-based Bronte tabled the most competitive bid for the demolition project and was able to meet the stipulation that 15 per cent of the resources for the work come from the nearby Mohawk community.

The contract covers the demolition of most of the three piers, but none will be removed entirely. The FBCL said environmental concerns, such as fish-spawning and pollution control, precludes their complete demolition. Each pier will be trimmed, but remain standing about two metres above the water line.

The project is scheduled to be complete by 2020.