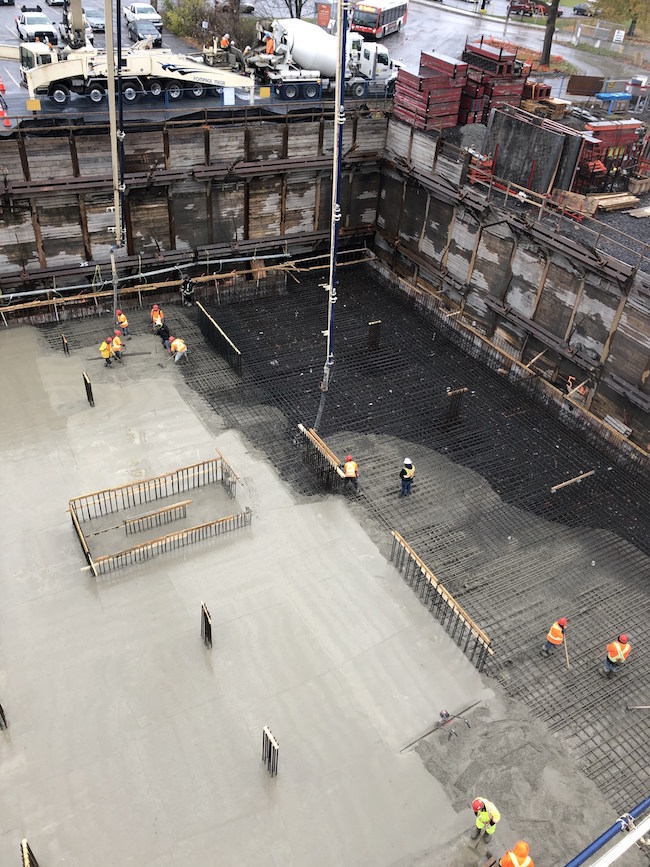 After 11 straight hours placing approximately 1,900 cubic metres of concrete earlier this month, crews in Old Ottawa East completed the foundation for the second of two condo towers at a new development that will eventually include nearly 1,000 units.

The new building, known as River Terraces Tower II, and its nine-storey counterpart that’s already nearing completion, are two of the largest components of the mixed-use Greystone Village project.

The Regional Group, an Ottawa based real estate firm, is leading the 26-acre project as the developer, while eQ Homes is the builder. The master-planned community is situated on and around the grounds of the Edifice Dechâtelets, a monastery and historical site tracing its roots to the late 1800s. Local construction management and real estate firm Morley Hoppner is serving as the general contractor for the new tower.

60 workers were part of the big concrete pour earlier this month. Three boom pump trucks and 225 loads of concrete were also required. The foundation pour took place about six months after shoring work started on the new tower this March.

Construction on the new building is expected to run until summer 2021, according to Ron Ingram, the senior project manager for Greystone. At peak, about 180 crew are expected to be working on-site.

Several other components of the Greystone project are scheduled to wrap up sooner. Residents are scheduled to move into the Terraces I tower no later than next summer and a series of townhouses and singles are nearly complete.

Work has also started on a pair of rental towers at the northwest edge of the development at Main Street and Oblats Avenue.

With Ottawa’s residential market continuing to boom, four other stages of development are planned for the Greystone site, which is next to Saint Paul University on a narrow band of land between the Rideau Canal and Rideau River, southeast of downtown. Ingram said the first of these latter stages is tentatively set to start in spring 2021, while the three others remain in design.