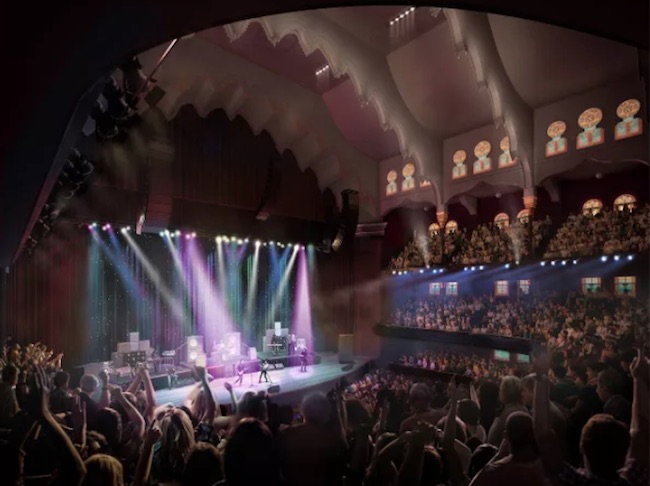 A rendering of the renovated venue. PHOTO: The Corporation of Massey Hall & Roy Thomson Hall

TORONTO—The doors of one of Canada’s most iconic music venues swung shut early this summer as construction crews got to work on a two-year revitalization project.

As the new Ontario government reiterated a $30 million funding pledge originally made by the previous government Dec. 10, work at Massey Hall in downtown Toronto is already well underway.

Phase 2 of the nearly 125-year-old venue’s revitalization began this July after the federal and then-Liberal provincial government each pledged $30 million toward the project. The price tag for entire renovation will total about $142 million. The major facelift includes updates to both the interior and exterior of the building, as well a seven-storey addition to the south side of the hall.

Massey Hall was built in 1894 and was designated a National Historic Site in 1981.

The first phase of the revitalization project was completed last year. It laid the groundwork for the new seven-storey tower that’s included in Phase 2 with the decommissioning of the former the Albert Building. The new tower will house two new venues: a 500-person artist performance hall and a smaller space featuring the “Centuries” bar.

Among other renovations to the main hall, crews will install a retractable seating system and restore about 100 of the exterior’s original stained glass windows.

Deane Cameron, president and CEO of Massey & Roy Thomson Hall, said the project will create jobs for about 1,800 tradespeople.

The venue, which has hosted famed Canadian performers such as Gordon Lightfoot, Neil Young and Rush, as well as an unending lineup of international acts, is expected to reopen in fall 2020.