Women in tech and construction: An unlikely combination

Harbr, a start-up company based in Halifax, represents two predominantly male industries: technology and construction; however, through its hiring process, the company is working to change that by employing a diversified team. Currently, the ratio of men-women staff is nearing 50-50 with four men and three women employed, and once gender equilibrium is reached, Harbr’s company culture wants to remain at that ratio. 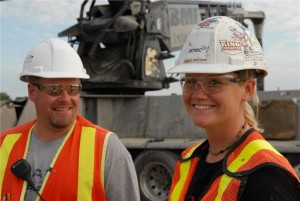 Women are rapidly being recruited to fill the skilled trades job gap.

“At Harbr we are a team, we work together, we work hard and we have fun. We value diversity and believe the key to success stems from this. I am thrilled with our team dynamics and look forward to continuing to diversify the company,” says Harbr co-founder & CEO, Dave Kim.  “I have a daughter and a son, and I want to demonstrate to both of them that women can succeed at anything they put their mind to.”

Placing women in leadership roles in business and entrepreneurship is a topic of national and international importance. Marc Benioff, CEO of one of the world’s largest companies (Salesforce), recognizes the importance of eliminating the gender gap. According to a recent article by Quartz, Salesforce is ranked second on a top-10 list of “Global Champions of Women in Business.” This matter is also near and dear to Annette Verschuren, CEO of NRStor, chancellor at Cape Breton University and former president and CEO of The Home Depot Canada and The Home Depot Asia.  Verschuren attended a summit with Prime Minister Justin Trudeau and U.S. President Donald Trump in February to discuss the importance of women in business and leadership roles. Verschuren endorses Harbr’s philosophy of putting women at the top and believes companies who hire females have a tremendous business advantage.

“Studies have shown better financial performance for companies with diversity at the top. The team diversification at Harbr should be seen as a shining example for other companies to look up to,” she says. “It is reassuring to see companies such as Harbr attempting to close the gender gap. I know they will continue to have great success because of their company values and innovative product offering.”

“It can be overwhelming and hard for women to enter a workforce that views them as inferior and some women may not enter the field at all if they feel greatly outnumbered,” says Ashley Kielbratowski, Harbr co-founder.  “This is a sad reality we have to face and change together; however, the future is bright with companies like Harbr, a company that I am so thrilled to be a part of.”

Harbr is a start-up company based in Nova Scotia that offers a mobile app that has the capacity to create insights and analytics to keep construction companies on time and on schedule.

Gender representation of business-owners by sex (% for Canada):

Source: 2014 Survey on Financing and Growth of Small and Medium Enterprises from Statistics Canada

Yet research shows that…

Profits increased by 15% when the share of women in leadership positions went from 0% to 30%.

Companies with at least one female founder outperformed all-male founding teams by 63% over the past 10 years.

Companies with gender diversity are 15% more likely to outperform.