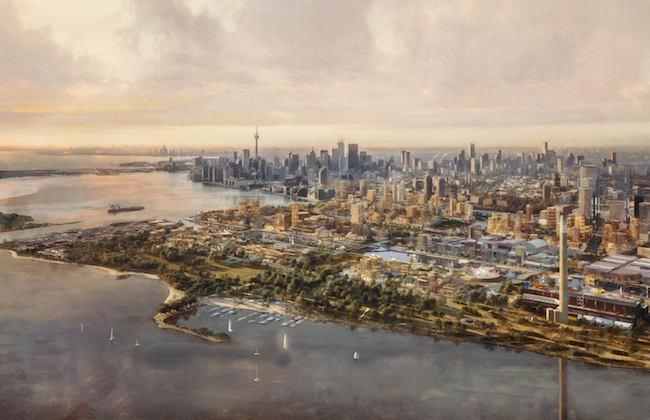 The Google affiliate has been working on an elaborate smart city plan for a 12-acre swath of Toronto’s waterfront. PHOTO: Sidewalk Labs

TORONTO—A committee tasked with advising Waterfront Toronto about Google affiliate Sidewalk Labs’s proposal to build a smart city says the agency should support most — but not all — of the company’s ideas for the high-tech neighbourhood.

Of the 160 ideas New York-based Sidewalk has pitched for a 12-acre swath of Toronto’s eastern waterfront it hopes to develop, 144 are worthy of support, but 16 should not be backed, says a report released Feb. 18 from the “evaluation” committee.

The report will inform Waterfront’s impending May 20 decision of whether to continue to pursue the project.

Committee members, however, took issue with some of Sidewalk’s most high-profile and widely-anticipated ideas, including its “raincoats” for buildings.

The awning-like structures are intended to make spaces more flexible by providing shelter in inclement weather, but access to fresh air and sunshine when conditions are better.

Sidewalk was so invested in the idea that it built a prototype at its Lake Shore Boulevard East office and repeatedly invited the public to take a peek at the model.

Now the committee said the structures create accessibility issues and have “shortcomings in the design and effectiveness of the proposed outdoor comfort systems” that “need to be reconsidered,” meaning the idea should not be supported.

The committee also does not want to support Sidewalk’s idea for a housing trust to capture private sources of funding to allocate towards future affordable housing and recurring payments by Waterfront to subsidize advanced infrastructure systems.

It also complained that a one per cent condominium resale fee Sidewalk pitched would not produce substantial benefits and that a neighbourhood association Sidewalk wanted to form would adversely affect leasing and housing affordability.

The committee reached such conclusions by wading through 1,500 pages of material Sidewalk included in its June 2019 pitch. It determined that 92 of the ideas should receive Waterfront’s backing because the onus for funding and delivery is on the private sector.

It said 17 ideas should be supported but will need policy or regulatory reforms, 24 should get the green light but will require government funding that Waterfront will advocate for and 11 should be backed but will likely have to involve a one-time investment from Waterfront.

Waterfront President George Zegarac, who was a committee member, said Sidewalk will have the opportunity to rejig some of the 16 ideas the committee did not like or present new ones.

He cautioned that just because the committee has supported some ideas, they won’t all necessarily be implemented.

“We are going to have to rank order,” he said. “We are not going to be able to do all of it…Part of the constraint is who is putting in what money?”

The report and remarks comes months after Sidewalk agreed — at the behest of Waterfront — to scale back and refine its pitch for the neighbourhood, after Sidewalk tried to push the project to encompass 190 acres instead of 12. Waterfront also got Sidewalk to agree to give Canadian governments more control over data privacy in the community and buy the project land at fair-market value. It has most recently been assessed as being worth $590 million.

Waterfront intends to put most of that money make into funding aspects of the project, Zegarac said.

Sidewalk said Tuesday that it was pleased with the committee’s review, especially because it found merit in advancing the project, and agrees with the assessment made about many of the items it chose not to support.

“For example, implementation of a sewage waste heat recovery system through a connection to Ashbridges Bay Wastewater Treatment Facility was heavily dependent on a larger geography,” said Sidewalk spokesperson Keerthana Rang in a statement to The Canadian Press. “That said, we are still in active negotiations with Waterfront Toronto and are still reviewing what will be possible.”

Asked whether Sidewalk will try to salvage the raincoats, Rang said the company is “excited” to keep looking at solutions for outdoor comfort and intends to review them with Waterfront on an ongoing basis.

Tuesday’s report was released ahead of two meetings Waterfront will hold on Feb. 29 to get more feedback from the public.

Waterfront still has until May. 20 to make a final decision on whether to move forward with the project. If it chooses to pursue the pitch, Sidewalk needs approval from three levels of government in addition to Toronto to move forward with its proposal. Construction would likely not start until 2022.