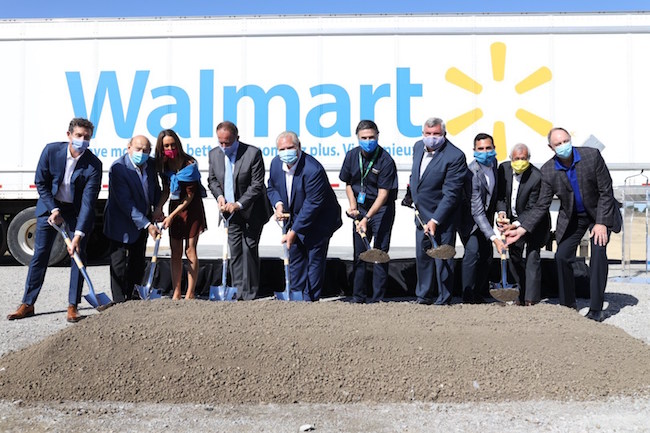 A month after announcing a major capital spending plan, Walmart Canada has broken ground on the new warehousing facility in the Toronto suburbs.

Government and company officials were in Vaughan, Ont. Aug. 12 to mark the official start of construction on the new 550,000 sq. ft. distribution centre, which will handle the most product on any of the company’s sites across the country.

“Our new distribution centre is going to be a world-class facility, which will help us grow and make our business better and simpler for our customers,” Horacio Barbeito, president and CEO of Walmart Canada, said in a release. “These are challenging times for everyone, but we are investing for growth because we believe in Ontario and Canada’s future and are proud to do business in this great country.”

The new site is part of the retailer’s five-year, $3.5 billion spending initiative and one of two new distribution centres planned. The other, a 300,000 sq. ft. facility, is already under construction in Surrey, B.C.

Walmart has not broken down the cost for each location, but said spending on the two new warehouses, plus renovations to an existing facility in Cornwall, Ont., will total $1.1 billion.

Located just north of Toronto at Jane Street and Teston Road in Vaughan, the facility will handle general merchandise as well as food products from about 3,000 suppliers.

The project is expected to create several hundred construction jobs over the next four years. The new facility is scheduled to open in 2024.