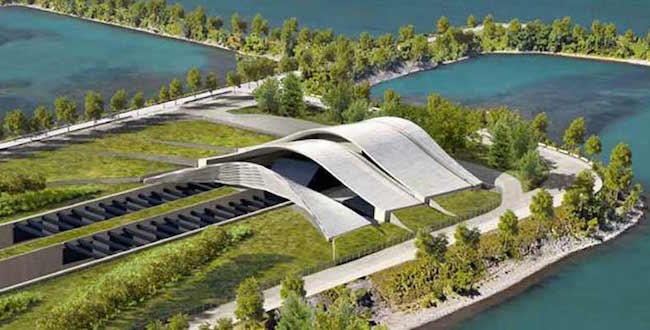 A rendering of the rehabilitated entrance to the tunnel on Charron Island. PHOTO: Vinci

Work is scheduled to start next year on the rehabilitation of a busy 1.5-kilometre highway tunnel under the St. Lawrence River in Montreal.

After years of planning, the Quebec Ministry of Transportation awarded a $1.1 billion contract for the Louis-Hippolyte-La Fontaine Tunnel rehabilitation project late last month.

The Renouveau La Fontaine consortium, composed of Eurovia, Dodin Campenon Bernard and Pomerleau Inc., is expected to start work on the project early next year. Eurovia, which is leading the construction team, and Dodin Campenon Bernard are both subsidiaries of France-based infrastructure giant Vinci. Quebec-based Pomerleau holds a 50 per cent stake in the design-build-finance project.

The LH Lafontaine Tunnel opened in 1967 and runs between Montreal and Longueuil on the eastern side of the St. Lawrence. It is the longest tunnel running underwater in the country and carries approximately 120,000 vehicles per day.

The scope of work covers major retrofits to the tunnel itself, the widening of Autoroute 20 and repaving about 25 kilometres of highways 20 and 25, which intersect on the Longueuil side of the river.

The build team will be required to keep the tunnel open to traffic during the four-year construction period. The Quebec Ministry of Transportation said repairs to various tunnel components, such as the concrete screed, walls, vault, joints and drainage, are included in the project. Along with repairs to the structure, Vinci said the work covers the installation of new fire protection facings, as well as modern electrical, ventilation and electromechanical systems.

The provincial and federal government will share some of the costs for the project, with Ottawa committing $427.7 million to the retrofits.

Construction is scheduled to start early next year and run until summer 2025.