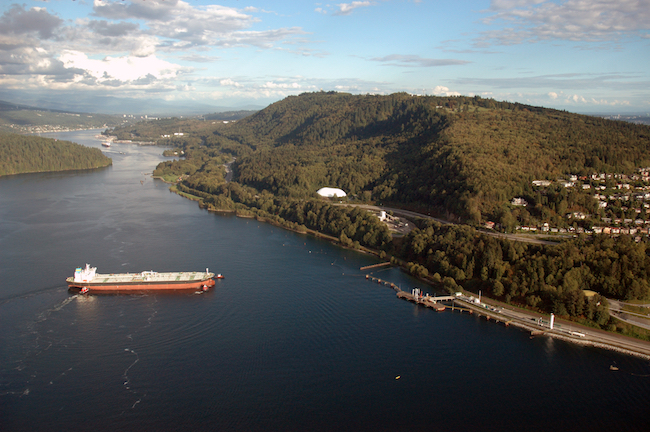 VANCOUVER—Environment and Climate Change Canada has ordered a halt to construction of the Trans Mountain pipeline through a forest in Burnaby, B.C., until the end of bird nesting season.

The department said the order was issued following an enforcement officer’s visit to the site prompted by complaints that nests of the Anna’s hummingbird and other migratory birds were being damaged.

“Given that it is nesting season, migratory birds are particularly vulnerable at this time,” it said in an emailed statement.

“Cutting vegetation and trees or carrying out other disruptive activities such as bulldozing or using chainsaws and heavy machinery in the vicinity of active nests will likely result in disturbance or destruction of those nests.”

It said construction is paused until Aug. 20.

The $12.6-billion expansion project is designed to triple the capacity of the existing pipeline between Edmonton and the shipping terminal in Burnaby to about 890,000 barrels per day of products, including diluted bitumen, lighter crudes and refined fuel.

Sarah Ross of the Community Nest Finding Network said the group began noticing hummingbirds in the Burnaby area in February. Anna’s hummingbirds are some of the first birds to nest and arrive as early as January, she noted.

“In the small area that we’re monitoring, I’d say there’s probably a dozen nests,” Ross said in an interview. Her group is watching a third of the area pipeline builders have been told to avoid.

“We’ve been really surprised at the density of hummingbird nests in this area. It’s a really rich habitat for them. It has all the things that they need _ close to clean water and has all the blossoms of the salmonberry.”

The group reported the presence of nests in the area to Trans Mountain and federal and provincial environmental authorities, she said.

It gave a verbal order on April 12, which asked the company to “immediately refrain from disturbing, destroying or taking a nest or an egg of a migratory bird” in the 1,000-metre area along Highway 1.

Trans Mountain was also ordered to immediately stop or shut down any activity, including tree trimming and cutting that may require the use of heavy machinery including bulldozers and chainsaws that could disturb and destroy nests.

About 10 days later, the department ordered the company to put up signs in the area that say no activity is allowed during the nesting period.

Trans Mountain confirmed that the order applied to the 1,000-metre area along the Brunette River for the duration of the nesting period.

“While Trans Mountain endeavours to conduct tree clearing activities outside of the migratory bird nesting periods, this is not always feasible,” it said in a statement.

The company will go-ahead with any work in the area that is not subject to restrictions, it said.

There has been no change to the projected completion date of December 2022, it added.

It did not respond to questions about possible added costs.

Anna’s hummingbirds and other bird species found in the area such as song sparrows, pine siskins, robins and black-capped chickadees are protected under the Migratory Birds Convention Act.

Trans Mountain said it is in talks with Environment and Climate Change Canada to determine how it can mitigate the disturbance to migratory birds during the nesting period.

“We are confident all of our approved environmental mitigation procedures are effective and will seek to have the restrictions under the order lifted as soon as appropriate and according to the law,” it said.

“Trans Mountain’s policies and procedures for the protection of migratory birds and their habitat were developed in consultation with stakeholders and communities and have been extensively reviewed by federal and provincial regulatory authorities.”