Construction activity strong in Canada’s largest city, which has almost as many cranes in the sky as the other 13 key markets in RLB survey. 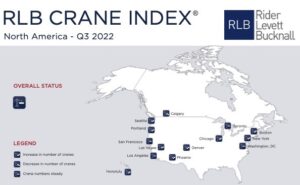 Even with 8.7 per cent fewer cranes since the previous report in Q1 of this year, Toronto continues to lead Rider Levett Bucknall’s (RLB) Crane Index for North America. Toronto had 230 cranes on sites during the Q3 2022 look at construction activity. With almost as many cranes in the sky as the other 13 key markets combined, RLB data shows that construction activities in Canada’s largest city remain very strong.

Overall, the net figures across the 14 cities surveyed saw a nominal decrease of 0.62 per cent (three cranes) from the Q1 2022 edition of the RLB Crane Index.

Toronto’s dip was attributed to a significant decline in new condo sales and mixed-use projects, along with staffing challenges related to recent strike activity in Ontario’s construction sector. The industrial market continues to be a hub of activity, however, with GTA demand for crane services centred on logistics and distribution, manufacturing, consumer goods and services, and retail/e-commerce businesses.

Looking ahead, the report says that promised government investments in transportation infrastructure will benefit the region’s economy.

The only other Canadian city in the index, Calgary, also experienced a drop since the first quarter of the year, but still had 21 cranes dotting its iconic skyline in Q3. The decreases were associated with the completion of many residential and office building projects in the downtown area. A rebound is anticipated, however, as the city has a variety of new construction projects underway with an estimated value exceeding $7.4 billion.

The RLB Crane Index for North America is published biannually and tracks the number of operating tower cranes in 14 major cities across the U.S. and Canada.