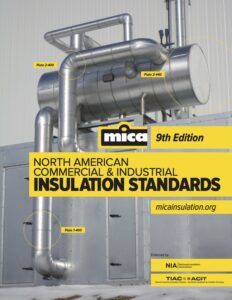 During the initial stages of updating its Best Practices Guide (BPG) in 2017, TIAC’s Innovators Group spotted a number of similarities between the BPG and the MICA manual, then called National Commercial and Industrial Insulation Standards. In late 2021, TIAC finalized an agreement with MICA to endorse an updated manual, the 9th edition, which was renamed the North American Commercial and Industrial Insulation Standards (NACIIS) manual. The new document is now available.

“We were always focused on updating the existing BPG, as we found it to have a lot of relevant and valuable information,” explained Luis Garcia, chair of TIAC’s Innovators Group. “As we dove deeper into the guide, we found that although the BPG had meaningful content, there were gaps in terms of updates to some practices. We also found there were numerous similarities between the BPG and the MICA manual. It was obvious to us that we had to think of a partnership with our neighbours to the south, and thus started the conversation about creating a U.S./Canada manual.”

The NACIIS manual is Canada’s only standards manual for mechanical insulation and contains information related to the design, specification and installation of thermal insulation on piping, fittings, ductwork, equipment and vessels found within commercial heating/ventilating/cooling and plumbing systems. Industrial power and process systems information on firestopping systems is also included, and refrigeration and cryogenic systems have also been added.

“The TIAC Board is so pleased to be partnering with MICA, along with our U.S. counterpart, the National Insulation Association, to strengthen the insulation industry across North America,” stated TIAC president, Joey Fabing. “Promoting quality workmanship and correct installation techniques, as well as the associated environmental and energy-saving benefits of mechanical insulation, has always been a priority for TIAC. Our ability to endorse this tool and provide it to our members across Canada is demonstrative of the value that industry associations can provide to their trades.”

“Possibly the most used sections of the manual are the installation detail drawings, referred to as plates, and the Appendix Tables, which are some of the most needed and sought-after points of data when considering a mechanical insulation system,” added Garcia.

The manual is published as a service to contractors, engineers, designers, owners and the mechanical insulation industry in general, and has grown to be recognized as the authoritative source for specifying and communicating installation details for mechanical insulation systems across the United States and Canada, but there is still work to be done on complete congruity.

“We are working on developing a cross-reference document for Canadian users of NACIIS for those instances where practices differ,” Garcia explained. “We will be reaching out to members of TIAC to rely on their expertise and experience to help the Innovators group to ‘Canadianize’ the manual.”

“Our industry in Canada now has a fully functional and up-to-date standard that they can refer to when they work on complex projects, or if they simply need a refresher on practices around insulation,” said Fabing. “As well, our industry in Canada now has access to combined expertise — this combined initiative elevates the North American industry as a whole and keeps us all up to date on industry standards.”

The NACIIS Manual is currently only available in English. The next phase of TIAC’s agreement with MICA is to have the manual translated to French for use across Canada.