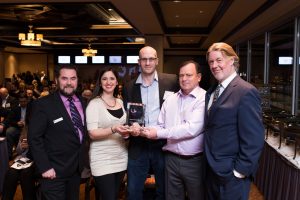 The Pioneer Village Station project was delivered on-schedule in December 2017.

The company was recognized for Project Achievement – Large Projects (over $50 million) and Outstanding Safety Culture.

The project achievement award was presented to Walsh for Pioneer Village Station in Vaughan, Ont. – one of six stations forming part of the Toronto-York Spadina subway extension.

In addition to building the structure, the company was also recognized for overcoming several logistical challenges.

It also straddled two different municipalities (Toronto and York Region, Ont.), for which additional levels of regulatory coordination were needed to maintain the flow of construction activities.

Other challenges include the execution of over 600 design changes, resequencing of activities due to external circumstances and protection of flocks of geese that reside at the project site. 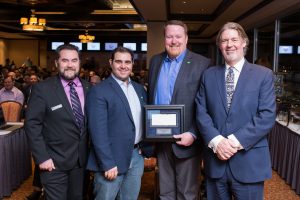 The Walsh Canada Bursary for Safety and Academic Excellence is offered students enrolled in the George Brown College Centre for Construction and Engineering Technologies in Toronto, Ont.

“The receipt of these two awards reinforces Walsh Canada’s status as a top builder in the Toronto market, demonstrating that we deliver quality work with a relentless commitment to safety,” said Craig Lesurf, vice president of Walsh.

“In light of winning these two awards together in the same year, I can say without hesitation that it isn’t a coincidence that the Pioneer Village Station project also had the best safety record out of all six new stations built for the subway line extension, proving that safe projects are successful projects.”