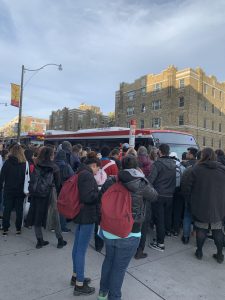 Service was suspended between York Mills and St. Clair stations with over 70 emergency shuttle buses operating as relief. While crowds of commuters congested Yonge Street between Lawrence and St. Clair avenues, Toronto Transit Commission officials carried out a structural inspection to assess the damage. A spokesperson for the TTC reported the line was closed until around 6 p.m. so crews could patch the hole with grout.

The puncture was unrelated to the ongoing Eglinton Crosstown construction. The TTC has not released the name of the construction company responsible for the tunnel breach.

According to the TTC’s Twitter, tunnel repairs were completed overnight and full service has resumed.