After waiting out a pandemic-forced hiatus, the industry comes out to support National Heavy Equipment Show. 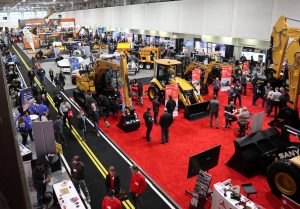 It should come as no surprise that show organizers were ecstatic with this year’s National Heavy Equipment Show (NHES). More than 9,000 industry professionals filled the halls of Mississauga, Ontario’s International Centre for the first edition of NHES since the COVID-19 outbreak, and the event’s 25th anniversary.

“We’re back! Shows are back!” proclaimed Master Promotion’s national show manager, Mark Cusack, in a conversation as the event wrapped up on the Friday.

“Leading up to the show, we were very happy with the exhibitor turn out, but we were worried about the visitor numbers,” he admitted, before adding how impressed he was with visitor turnout, which exceeded the Thursday attendance figure from 2019 and was tracking very well as the end of the final day started to come into view. “We are very happy with the numbers.”

And it wasn’t just the volume of visitors through the turnstiles that impressed exhibitors; it was the fact that key decision makers and purchasers came out in full force to this year’s show.

“I’ve been seeing a lot of quality buyers here, so the right people are coming to the show,” stated Michel Marchand, vice-president of Canadian and U.S. sales with LiuGong North America. “Traffic has been good. The public is excited to have a show. They haven’t had one for a number of years. I think they are happy with what they have seen.”

“The visitors are legitimate buyers,” added Rob Persaud of International Power Systems. “There were not as many tire kickers this year. It’s been a wonderful show. Definitely the one to be in.”

“The National Heavy Equipment Show remains one of the biggest events bringing the industry together in Canada. It was a pleasure to welcome everyone back to the show after a two-year hiatus,” summed up Cusack.

If you were unable to make the in-person show, the National Heavy Equipment Show’s Digital Marketplace is live until April 11. The marketplace will allow you to interact with dealers and exhibitors online and browse company information, photo and video highlights, specials and promotions, and more.

The next edition of National Heavy Equipment Show will take place in 2024, again being held at the International Centre. Stay tuned to www.nhes.ca, or follow the show on social media, for details as they are announced.

Up next for Master Promotions is the Atlantic Heavy Equipment Show, which will take place on April 13 and 14 at the Moncton Coliseum in Moncton, N.B. Visit www.ahes.ca for full details.