Strikes in Ontario caused a small dip in national investment in building construction; minus Ontario, investment increased more than one per cent. 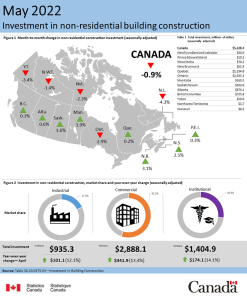 Investment in building construction was almost flat in May, edging down 0.2 per cent to $20.6 billion, according to the latest figures compiled by Statistics Canada. The agency attributes the dip to strikes among many of Ontario’s unionized construction workers during the month. These strikes caused significant delays in numerous residential and non-residential construction projects throughout the province. Excluding Ontario, investment increased just over one per cent at the national level.

The workplace stoppages also resulted in the end of a 13-month streak of growth in the non-residential sector. Combined, the components contracted 0.9 per cent to $5.2 billion in May despite gains in eight provinces, with all three components moving downwards compared to a month earlier.

Looking at the components, multi-unit construction continued to climb, increasing 3.4 per cent to $7 billion, while investment in single-family homes declined 2.5 per cent, ending a seven-month growth streak.